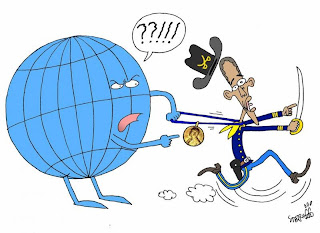 US Secretary of State John Kerry's strong words against the alleged mass killings in Syria have made peace-loving people around the world stand on edge.

President Barrack Obama, who is concurrently the US commander in chief, should not fall behind such a bellicose attitude.

The world has had enough of the superpowers flexing their military muscles by going into wars in smaller countries. It's about time you tried to bring peace and harmony to the world by any other means than to add more to the killing of innocent people.

Also, when asking whether people have lost their "conscience" or "moral compass" - check for your own as well.