Prabowo as Indonesia’s Next President? 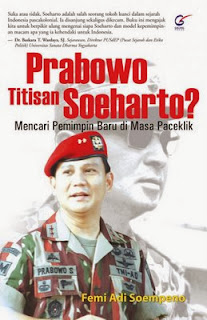 Read about the REAL Prabowo at http://www.humanrightsfirst.org/2012/09/12/indonesia-ghosts-of-past-abuse-haunt-political-ambition-of-prabowo-subianto/


It wasn’t that long ago that Prabowo Subianto was one of Indonesia’s most reviled men. The son-in-law of former Indonesian president General Suharto, Prabowo has been accused of kidnapping, human rights abuses, and an attempted coup.
Today the retired army general is the leading presidential candidate in Indonesia’s 2014 elections.
In May of 1988 General Suharto was thrown out of office following a period of rioting and economic upheaval. Prabowo was accused of instigating the violence. Soon after being dismissed from the army and shunned by the Jakarta elite, he began living in self-exile in Jordan.
In just over a decade, Prabowo has  transformed from one of the most despised men in Indonesia to one of the most celebrated.  Prabowo is the leader of the Great Indonesian Movement Party (Gerindra), a political group with an estimated 15 million members. However, Prabowo still needs the support of the Indonesian Democratic Party (PDI-P) or another major party in order to become a coalition’s presidential nominee .
Human rights activists say Prabowo isn’t fit to head the country because of his alleged involvement in the violent crackdowns on democracy protestors during the Suharto era. “I think to have Prabowo as the next Indonesian President would have tremendously negative implications for resolving human rights cases,” said Haris Azhar, Executive Director of Indonesian human rights NGO KontraS. “How do we expect a policy of human rights accountability from a person responsible for atrocities?”
When Suharto’s 32-year reign came to an end in a frenzy of national protest and riots in 1998, members of the Indonesian Special Forces unit that Prabowo commanded were accused by activists of kidnapping democracy advocates, among other crimes. When Suharto stepped down, the military forced out General Prabowo. “[I]n the 1990s, [Prabowo] was instrumental in forcefully defending the Suharto regime from perceived threats, and he was therefore diametrically opposed to the reformist elements that gave rise to Indonesia’s democratization,” said Kevin O’Rourke, the Jakarta-based author of “Reformasi,” a book on Indonesia’s transition to a democracy in the late 1990s. “His high ranking in recent presidential preference polls reflects disenchantment with other aspiring nominees.”
Prabowo was never charged with any wrongdoing. He claims that he wasn’t involved with any human rights abuses and that political rivals have spread rumors about him. “This is the risk of being a military leader. When you serve a government and serve your country, then when politics change, we have to face the risk of allegations,” he said.
Prabowo says his party has a relatively clean record on corruption, long considered a serious problem in Indonesia. Another pillar of Mr. Prabowo’s platform is that he is solidly secular, and his party plans to protect the rights of minority religious groups in the Muslim-majority country.
Australia and the United States have made it clear in the past that  they would deny Prabowo a visa because of his human rights record, but now face the possibility that they will have to accept what one diplomat calls “new political realities.”
Indonesia is the world’s largest Islamic Democracy and a strategic ally for the US in Southeast Asia. If Prabowo becomes Indonesia’s next President, the US will need to seriously revise its relations with the former general. The relationship could pose further problems with the release of a report by the Indonesian Human Rights Commission, Komnas HAM, about the Suharto-era Communist purge, which could implicate Prabowo.

Further article…
If public graft were a symphony, Djoko Susilo might be its Mozart. On a salary of US$1,000 a month, the former head of Indonesia’s police academy managed to amass a fortune of $18 million. Earlier this month, Djoko was sentenced to 10 years in prison by the Jakarta Corruption Court for accepting a $2.9 million bribe for a contract that eventually lost the state $10 million.

On the same day Djoko was found guilty, a former Health Ministry official was sentenced to five years in prison for embezzling $1 million. Last month, the country’s top oil and gas regulator — revered as a “clean man in a corrupt industry” — was charged with taking $700,000 in bribes from an oil-trading company. All told, more than 360 Indonesian officials have been jailed on corruption charges since 2002, including cabinet officers, governors, members of parliament and judges.

At a time when every Islamic nation in the Middle East seems to be on fire, Indonesia — which has more Muslims than Syria, Iraq, Afghanistan and Egypt combined — appears to be a relative oasis of diversity and democracy. On track to become one of the world’s 10 largest economies, this Southeast Asian nation is also set to witness the third consecutive direct election of its president next year after five decades of dictatorship.

But in a country where more than half of the population lives on less than $2 a day, Indonesia’s deepening corruption at the highest levels isn’t just a threat to economic growth — it’s a ticking time bomb whose detonation could send shock waves across Asia, destabilize America’s China strategy and make the violence in Egypt and Syria pale by comparison.

“If Indonesia continues along the path it is currently taking — with high levels of inequality, high levels of corruption and poor governance — it will eventually lead to chaos and revolt,” Prabowo Subianto, the former commander of Indonesia’s special forces and a leading candidate for president, tells me in a private meeting. “What has happened in the Middle East over the past 24 months could happen in Indonesia, unless we change course towards fairness, equality and transparency in government.”

The toxic combination of graft and poverty has also fueled a sharp increase in religious-based violence, with 264 attacks reported last year. Among the potential presidential candidates, Prabowo has spoken most forcefully about the dangers of endemic graft and rising intolerance. He is also the person that many observers believe represents the country’s best hope for curbing corruption and Islamic extremism before it leads to violence.

Prabowo hasn’t always seen in such a positive light. When Indonesia’s longtime authoritarian president Soeharto fell in 1998, the former three-star general — then Soeharto’s son-in-law — was accused of leading deadly crackdowns against democracy activists.

Although never charged with wrongdoing, he was found guilty of “exceeding orders” by a military commission and dismissed from the army.

But in a nation where millions yearn for a greater measure of the strength and order that defined the Soeharto years, time has brought to the fore the qualities for which Prabowo is best known — what the popular former defense msinister, Juwono Sudarsono, defines as his “fierce loyalty to Indonesia, leadership, decisiveness — and toughness”. And like Lee Kuan Yew — who governed by the credo, “If nobody is afraid of me, I’m meaningless” — Prabowo strikes fear in the hearts of still-corrupt Soeharto-era cronies because, as one journalist tells me, “He is the only one they respect.”

As 2014 approaches, Prabowo has other advantages working in his favor. His campaign is being financed by his wealthy brother, Hashim Djojohadikusumo. In a nation with a history of Muslim-Christian violence, Probowo’s brother is a devout Christian, which is reassuring to many who fear a fundamentalist takeover in Jakarta.

At a time when elites pay scant attention to Indonesian’s poor, Prabowo’s Gerinda party — taking a page from the successful playbook of Thailand’s former prime minister, Thaksin Shinawatra — is strongly positioned as the voice of poor farmers, with a growing base beyond urban centers.

There is also a potential running mate who would ideally complement Prabowo’s discipline with a proven ability to achieve tangible, transformative results on the ground: Ibu Risma, mayor of Surabaya, Indonesia’s second-largest city.

Recognized nationally as a reformer, praised by popular Jakarta Governor Joko Widodo for her relentless dedication to improving the lives of average Indonesians, the woman known as “Mother Risma” also has a strong anticorruption record. She was the driving force in establishing Surabaya as the first city in Indonesia to implement a transparent e-government online system that reduced both costs and graft.

There isn’t another public figure in Indonesia, including Joko, who has a more sparkling record of achievement than the deeply humble Ibu Risma. With her on the ticket, it would prove that Prabowo is serious about cutting corruption with a partner who knows how to implement a clean and transparent government system.

Still, Prabowo’s path to the ballot box remains unclear. Under Indonesia’s election laws, any candidate for president must be supported by a party or coalition earning at least 20 percent of the popular vote in next April’s legislative elections. In the last national election, in 2009, Prabowo’s party won just 4.5 percent.

But he may have a number of potential coalition partners. Rumor has it that on his deathbed in December of 2009, revered former President Abdurrahman Wahid, known as Gus Dur, urged members of his Nahdlatul Ulama party — the nation’s largest Islamic organization, with 40 million moderate Muslim members — to strongly support Prabowo for president.

Maybe Gus Dur knew the same thing that Juwono believes, when he says, “Prabowo is the only candidate with the grit to become president.” With corruption increasingly drawing the ire of Indonesia’s citizens, by 2014, he might just have the votes to become president, too.

The writer, a global mining executive and founder of Washington-based Business Executives for National Security, has been widely published on domestic and international issues for four decades. Stanley A. Weiss, Ubud, Bali