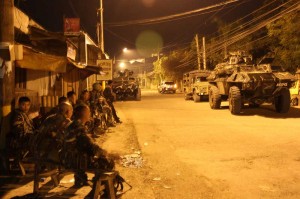 Philippine Army troops backed by armored vehicles block a road leading to the village of Mampang in Zamboanga City on Wednesday night. The soldiers were prepared to engage Moro National Liberation Front rebels, but reports say dozens of MNLF fighters had slipped through the cordon before sundown.
Photo By Al Jacinto

The storming of Zamboanga City by forces of the Moro National Liberation Front (MNLF) that started Monday marks the unraveling of President Aquino’s injudicious, even reckless roadmap to end the Islamic insurgency in Mindanao.

Those were heady days for Aquino in 2011, that he thought he could win the Nobel Peace Prize in the following year by dramatically flying secretly to Tokyo to meet with the Moro Islamic Liberation Front(MILF) chairman Jaafar Gazali for the unveiling of his peace plan for the Islamic insurgency in Mindanao.

He forgot, or refused to see the implications though. There was such an organization as the MNLF, which the Organization of Islamic Conference in 1976 as well as the Cory Aquino and Fidel Ramos regimes had recognized as the legitimate representative of the Muslim insurgents.
The MNLF: Ignored in Aquino’s peace plan, now a problem.

His mind obsessed with the delusion that a Nobel Peace Prize was within his reach, Aquino ignored the realities of the Muslim insurgency. True, the MNLF had been drastically weakened since its peace pact with the government, a victim of its own success as many MNLF veterans had been integrated into the police and the military along the terms of the 1994 Final Peace Agreement during the Fidel Ramos administration. True, many MNLF veterans were disappointed—or even disgusted—with its chairman Nur Misuari that they set up their own break-away groups.

What Aquino didn’t understand though was the ethnic dimension of the Muslim insurgency. Moros are deeply divided along ethnic groups, which are nearly nations in that they have their own territories.

Although Misuari tried to make MNLF a secular organization, even leaning towards a socialist orientation because of the influence of Communist Party of the Philippines founder Jose Ma. Sison over his thinking, his organization has been basically an organization of Taosugs, who are based in Sulu. This was not unexpected as Misuari is a Tausug himself, with his father part of the Tausug royalty. Misuari had relied initially (and even today) on his kinsmen and their network for the MNLF’s backbone.

However, a big push to the MNLF’s growth was the addition to its ranks of an entirely different group of young Moro leaders led by Hashim Salamat, who unlike Misuari was an Islamic cleric who studied in Muslim universities in Saudi Arabia, the breeding ground for Islamic jihadists in the world. In contrast to Misuari’s views, Salamat saw the Moros’ struggle in religious, Islamic terms, thus its name as an Islamic rather than National Front.

Salamat though is from another Muslim ethnic group, the Magundanaoans who mostly populate the central Mindanao provinces of Maguindanao, North Cotabato and Sultan Kudarat. The Maguindanaoans—that Salamat recruited into the MNLF of which he was vice chairman until he broke off in 1977—dominated the so-called Batch 90 of MNLF commanders, who were first trained in Malaysia by former British special forces and who would form its officers corp.

It is the MNLF’s ethnic base that provides it with a pool of fighters that Misuari, or even his successors, can call upon to wage war. After all, Sulu has been one of the poorest provinces in the country, making it a breeding ground for insurgents.

The terrorist Abu Sayyaf was mostly organized by sons of veteran MNLF commanders who felt that Misuari had capitulated with his peace agreement with Ramos in 1994. Rather than join the MILF—seen as an organization of Maguindanaons—these MNLF sons instead set up their own armed group, which Al-Qaeda jihadists from Indonesia had brainwashed to their cause.

Part VII of the agreement also specifies that a major role of the Transition Committee, which has to implement the Agreement, is “to work on proposals to amend the Philippine Constitution for the purpose of accommodating and entrenching in the Constitution the agreements of the Parties.”

But with the pork barrel system removed, which Aquino is forced to do so or face the nation’s wrath, he will be unable to bribe the legislature to pass the Bangsamoro Basic Law, which the dominantly anti-Moro Congress actually hate.