Indonesian View Point: Awaiting the perfect storm and the rumbles of crises past 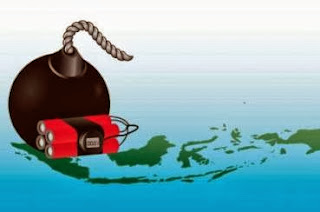 Eyebrows may well rise when officials gush about the country’s current sound fundamentals. Echoes of years gone by, July 1997, when the same claims were trumpeted. Six months later the bottom fell out of the Indonesian economy.

Warnings of an economic regression of the magnitude of 1997/98 or 2008 now abound. Analysts and columnists lucidly alarm or are riotously alarmist.

But the facts are that Indonesia, if it isn’t already in the eye of one, is heading toward a storm. And a near perfect one at that!

Mirriam-Webster defines “perfect storm” as “a critical or disastrous situation created by a powerful concurrence of factors”.

Each previous crisis was prompted by global trends, but the crosswinds of politics, blithe economic assumptions, external recession and low public confidence are presently brewing up a familiar yet dissimilar tempest to those of the past.

In 1997, the regional crisis coupled by a suspect banking system here led to – by design or default – orchestrated political change, which exacerbated and prolonged the economic and societal unrest that ultimately forced structural changes in the Indonesian economy.

The crisis of 1998 was, surely, a once-in-a-lifetime transformative experience. Or so we hoped.

At the end of 2008, the collapse of First World financial institutions spread a contagion the world over. But a conjunction of coincidental elements, in no small part due to the resilience learnt from a decade earlier, allowed Indonesia to weather the storm unfazed.

Exports remained high, thanks to a global commodity boom. Private consumption remained strong, accounting for 60 percent of the economy.

More importantly confidence in the political leadership was at an all-time high.

Within a year the incumbent president would be swept to victory with an irresistible mandate.

But the clouds looming today are especially foreboding, as they seem to condense the worst parts and most unfavorable elements of crises past.

Today, there is no commodity boom to save the day. In fact, miners are too busy now saving themselves.

Coal prices, for example, are down 15 percent this year, and the Indonesian Coal Mining Association has, as a result, rejected government demands for a royalty hike.

“It’s cheaper to shut down production than to run a business at a loss,” said Pandu Sjahrir, the association’s commercial chairman.

Newcastle thermal coal prices for the coming months are expected to trade below US$80 a ton, compared to $192.5 in July 2008.

With such dependence on commodity exports it comes as no surprise that last year Indonesia recorded its first annual current account deficit in decades, ballooning to $24 billion, with the likelihood of an even bigger deficit this year.

Such is the concern over the deficit – which reached more than 4 percent of GDP in the second quarter – that the government is suspending plans to apportion natural resource exports as it seeks to offset rising imports.

“As regards exports, this is an emergency,” Energy and Mineral Resources Minister Jero Wacik told reporters recently. “What is important is that the country’s trade balance improves.”

The depletion of foreign exchange reserves has been another worrying trend, which Bank Indonesia Governor Agus Martowardojo has been quick to counter by saying that present-day levels are much higher than in 2008. In July, however, reserves sank to $92.7 billion, the lowest since October 2010.

The reduction of fuel subsidies in June was a welcome move, but overdue in addressing the structural issues that have caused the deficit to surge to its current unsustainable level.

And it seems there is no quenching the thirst for cheap fuel, as consultancy firm Wood Mackenzie says Indonesia will be the world’s top importer of gasoline by 2018.

With the rupiah slumping and GDP growth sliding the International Monetary Fund has already cut Indonesia’s growth forecast from 6.3 percent to 5.25 percent.

For now foreign direct investment looks on track to meet its targets, but the real issues are not the profitability or attractiveness of investment in Indonesia but rather the lack of legal certainty and the ‘high-cost economy’, which deter investors.

The graft scandal involving SKK Migas chief Rudi Rubiandini, the conviction of environmental managers at Chevron in a highly questionable case, and many other cases have sent up storm signals about the nation’s legal uncertainty.

But the economic challenges today may not be the biggest encumbrance. The most significant difference from 2008, and greatest similarity to 1998, is that it is as much a crisis of the economy as it is one of politics.

The question of leadership has lingered on too long and with legislative elections just seven months away the business community is asking just how focused the government is.

In short, it is a crisis in political confidence.

While appreciating the initiatives and stimulus steps taken by the government recently, the lingering question remains whether the government, in this case the President, will make the difficult choices when required.

One example being whether he will stick to his commitment to a ceiling on minimum wage increases as labor demonstrations mount.

While much has also been made among the elites of Jakarta about the need for economically vigilance, we are not seeing the same mindset in the regions. Local administrations and businesses seem to have an insouciant mindset, with an almost business-as-usual attitude.

This is perhaps even more worrying than in 1998, when there was a sense of crisis from Sabang to Merauke.

These phases do not always occur in sequence, and governments are by nature politically obdurate when it comes to bad news and change.

It seems Indonesia is still stuck between denial and hasty policy-making. And the political ambience of 2014 may not be conducive to doing more.

In a storm, lightning doesn’t often strike twice in the same place, but it may do if we choose to stand motionless where the first strike occurred. By Meidyatama Suryodiningrat, The Jakarta Post, Jakarta | chief editor of The Jakarta Post.