Indonesia Has Bigger Problems Than Bikinis 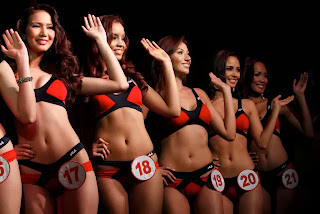 Miss World Philippines 2013 contestants wave during a bikini contest at the Solaire Resort and Casino in Paranaque city, metro Manila on July 31, 2013. The Miss World finale, which will be held in Indonesia, had to scrap the bikini contest amid protests by hard-line Islamists

Indonesians are taking to the streets to demand the government heed their complaints. Are they livid about corruption? No. Fed up with poverty? Not really. Angry over political gridlock? Not so much. It’s those damn bikinis.

In recent days, the nation with the world’s largest Muslim population has been consumed by protests against the Miss World pageant finale on Sept. 28, originally scheduled to be held near Jakarta. Muslim groups, including radical ones, have threatened violent attacks. The government has responded by moving the event to Bali — the Hindu-majority island popular with Westerners — increasing security, and hoping for the best.

This column isn’t a defense of beauty contests. My question is, why the misplaced anger? Where’s the outrage over obscene levels of graft, which eats up national wealth and forces 115 million Indonesians to live on less than $2 a day? Where are the placards condemning policies that have made the rupiah Asia’s most pathetic currency? Why don’t we hear chants demanding greater accountability from leaders?

It’s great that Indonesians are worked up, but their ire would be more constructive if it were focused on the right target. Investors know the trouble. And that’s the biggest problem of all.
Deep breath

First, let’s all take a deep breath. The risk of Southeast Asia’s biggest economy plummeting into free fall, as it did in 1997, is quite small. Its banks are much healthier. The government is far more transparent, and the central bank is sitting on $93 billion of currency reserves. That might seem like a paltry amount compared with, say, South Korea’s $331 billion, but it’s more than twice the size of the International Monetary Fund-led bailout Indonesia received 16 years ago. Also, short-term foreign-currency debt levels are manageable.

The political stability that President Susilo Bambang Yudhoyono has established since 2004 has won investment-grade ratings from Fitch Ratings and Moody’s Investors Service. The former general is now taking aim at Standard & Poor’s, which rates the economy at the highest junk level.

Foreign-direct investment trends, meanwhile, show that Indonesia’s domestic market is still wooing considerable long-term money. The total rose 18.9 percent from a year earlier in the second quarter to $6 billion. Although that’s the slowest pace since 2010, it’s still suggestive of a nation that, for all its warts, has a bright future. Long-term investors remain enthusiastic about Indonesia’s vast store of natural resources and the fact that 26 percent of its 250 million people are younger than 15.

Yet short-term investors are focusing ever more intently on those warts, which Yudhoyono’s government must urgently address. The most immediate worry is a trade deficit that widened to a record $2.3 billion in July, weighing on a current account that’s been in shortfall for seven straight quarters. That’s prompting waves of hot money to flee and creating a sense of crisis.

The bigger problem is the government’s failure to use the good times to accelerate infrastructure upgrades and institutional reforms. Inadequate ports, highways, refineries and power grids are squandering Indonesia’s chances of attracting manufacturing jobs that are now going to China, the Philippines and Vietnam. The government has been remiss about making Jakarta’s bureaucracy more efficient, building more credible judicial and tax systems, rolling back unaffordable subsidies, and scrapping limits on mining exports that smack more of nationalism than good economics.

Corruption remains rampant. Early on, Yudhoyono scored some headline-grabbing victories over graft. But the campaign lost focus and urgency. In 2012, Indonesia slipped 18 places in Transparency International’s Corruption Perceptions Index, falling behind Egypt. Yudhoyono can’t run in next year’s election. What if his successor cares more about enriching cronies than moving Indonesia forward?

The Miss World controversy raises another concern: the democratically elected leader of a secular government caving to the whims of an ultraconservative minority of Muslims. One of Yudhoyono’s most important tasks is to hold the forces of creeping Islamization at bay. Last year, radicals prompted Lady Gaga to scrap a sold-out concert in Jakarta, making for damaging headlines overseas.

The last few months have shown how fickle markets can be about Indonesia and how vital it is for the government to head off negative sentiment before it overwhelms the economy. Yudhoyono must use his last 10 months in office to cement the sweeping changes that originally made Indonesia an investment darling. He must accelerate plans to spend $125 billion on infrastructure by 2025. He should empower an independent anticorruption ministry with full subpoena powers. The country needs a grand blueprint and timeline for the strengthening of democratic institutions. The former general must insulate the government further from military influence, as well as contain extremism.

But Indonesians need to do their part, too. Their voices can keep Yudhoyono focused on the real obscenity. It’s not beauty contests or scantily clad pop stars but a vast kleptocracy that thrives off the masses being distracted by the small stuff. The more voters obsess about exposed skin, the less the fraudulent class has to worry about being exposed. That’s the real travesty here, not Miss World’s bikini. Bloomberg by William Pesek is a Bloomberg View columnist. (Reuters Photo/Romeo Ranoco)