The birth of Bangladesh-Blood meridian 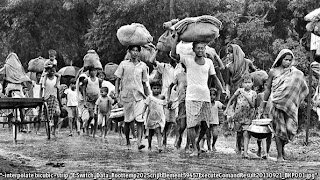 UNTIL 1971 Pakistan was made up of two parts: west and east. Both Muslim-dominated territories were born out of India’s bloody partition 24 years earlier, though they existed awkwardly 1,600km apart, divided by hostile Indian territory. Relations between the two halves were always poor. The west dominated: it had the capital, Islamabad, and greater political, economic and military clout. Its more warlike Pashtuns and prosperous Punjabis, among others, looked down on Bengali easterners as passive and backward.

The split into Pakistan and Bangladesh was perhaps inevitable. It began in late 1970, after Pakistan’s first national elections. To the shock of West Pakistanis, an easterner, Sheikh Mujibur Rahman, won a sweeping victory, and was poised to lead the country. His Awami League wanted greater rights for Bengalis. But the army chiefs and politicians in Islamabad would not countenance his taking office. They arrested him and the army began repressing eastern protesters.

In “The Blood Telegram” Gary Bass, a Princeton academic (who once wrote for The Economist), sets out to assess America’s handling of the war. He argues that the killings amounted to a genocide: Hindus, as a distinct minority, were chosen for annihilation and expulsion. He asks why Nixon continued actively to support the Pakistani leaders who were behind it.

At the behest of Mr Kissinger, Nixon sent military planes and other materiel to Pakistan, even though he knew this broke American law. He deployed an American naval task force to the Bay of Bengal to intimidate India, which had begun helping rebels in East Pakistan. Most extreme, he secretly asked China to send troops to India’s borders. He did so accepting a risk of Soviet retaliation, even that nuclear bombs might be “lobbed” around in response.

Nixon and Mr Kissinger stood with Pakistan, even as they knew of the extent of the slaughter. Their own diplomats told them about it. The centrepiece of Mr Bass’s gripping and well-researched book is the story of how America’s most senior diplomat in East Pakistan, Archer Blood, the consul-general in Dhaka, sent regular, detailed and accurate reports of the bloodshed. Early on he stated that a “selective genocide” was under way.

Blood and his colleagues protested that America should not support Pakistan’s rulers. Then, 20 of them sent a dissenting telegram (the “Blood telegram” of the book’s title) condemning America’s policy. It was an extreme and idealistic step for a diplomat, whose career was soon cut short. Though the telegram did not change American policy, it rates as an historic document. Such open dissent is extremely rare.

Mr Bass does a good job of explaining Nixon’s wilful support of Pakistan. Using newly released recordings of White House conversations between the president and Mr Kissinger, he sets out with admirable clarity what else was at stake. In part it was personal. Nixon, a man of few friends, was notably fond of Pakistan’s military ruler, Yahya Khan, a gruff, dim-witted, whisky-drinking general. Nixon compared the Pakistani favourably to Abraham Lincoln. By contrast he despised India’s wheedling civilian politicians, reserving a particular dislike for Gandhi, whom in private he frequently called a “bitch” and “witch”.

More important, Pakistan was a loyal cold-war ally, whereas India was seen as leaning towards the Soviet Union. Crucially, Mr Kissinger early in 1971 was using Pakistan as an essential secret conduit to China. He flew via Islamabad to Beijing to arrange for Nixon to make his own trip to see Mao Zedong. Better relations with China would allow America to wind down the war in Vietnam.

Ultimately, Mr Kissinger did much to set America’s course. He argued that America should pay no heed to domestic horrors in Pakistan, saying “you can’t go to war over refugees”, and warned that India was a greater threat to international order. Indian “bastards”, he agreed with Nixon, needed a “mass famine” to cut them down to size.

Mr Bass depicts Mr Kissinger as increasingly erratic, perhaps overworked, as East Pakistan’s secession became inevitable. He is quoted calling the conflict “our Rhineland” (in reference to the start of the second world war) and warning that India would “rape Pakistan”.

Mr Kissinger adopts a magisterial tone in the one chapter he devoted to the India-Pakistan crisis in his 1979 work, “The White House Years”. He refused to speak to Mr Bass for this book, and glosses over the Blood telegram in his memoirs, never explaining why he ignored the entreaties of the diplomats on the ground. That is a pity, because America’s response to the war has reverberated over the years.

The 1971 war poisoned regional affairs for decades. It ended when India’s army intervened, having supported East Pakistan’s rebels for months, and crushed the Pakistani forces within days. Pakistan was humiliated, yet no Pakistani soldier has been held to account for the mass slaughter that provoked the war. Pakistanis by and large prefer not to discuss it. The war did convince them that India might next try to break up the remaining western rump of their country, perhaps by supporting Baluchi separatists on the border with Afghanistan. A sharp mutual suspicion still lingers between the neighbours, helping ensure that Pakistan’s army dominates—and damages—the country still.

Nor did the war do much for India. Eventually the refugees went home, but relations with Bangladesh soon soured. At home Gandhi became suddenly more popular. But she then descended into authoritarianism, even suspending democracy. Inside Bangladesh the war remains a live political issue as alleged collaborators in the conflict (all opposition leaders) are being tried by a flawed, local war-crimes tribunal. This week, one defendant was sentenced to death by the Supreme Court.

Could things have been different if America, having listened to Blood, had pressed Pakistan not to slaughter its own people in 1971? Mr Bass does not speculate directly. Yet if a peaceful secession of Bangladesh had been possible, many lives would have been saved and a source of deep division in a troubled region would have been removed. The Blood Telegram: Nixon, Kissinger and a Forgotten Genocide. By Gary Bass. Knopf; 499 pages; $30. Buy from Amazon.com The Economist