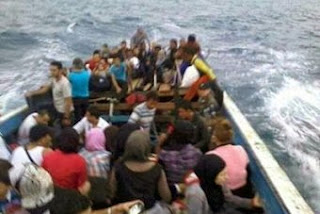 Updated 52 minutes ago
Photo: An overhead shot of an asylum seeker boat before it sank 50m off the Indonesian coast on September 26, 2013. (Supplied)
Members of the Indonesian military have been implicated in a fatal people-smuggling operation that may have killed up to 30 children.
The asylum seeker boat got into trouble last week and broke into pieces just off the south Java coast.
As many as 50 people are either dead or still missing, most of them children.
Another 10 bodies have been recovered, lifting the death toll to 31, with search and rescue operations been suspended until this morning.
Those who did survive are helping Indonesian and Australian investigators to identify the people responsible.
The names of two key smugglers have emerged: Abu Saleh and another man called Abu Ali.
And embarrassingly, local authorities have again been implicated as playing a key role in getting the passengers to the boat.
Survivors said Indonesian soldiers helped ferry them to the coast where the doomed boat was waiting.
"The army took us," one survivor said.
"The army was driving the cars."
Passengers recall doomed voyage
The passengers said engine trouble began on Thursday and the boat started taking water, forcing them to turn back to Indonesia.
Eventually, the motor pumping water off the boat ran out of petrol.
The boat then hit rough seas and capsized only 50 metres from the shore.
Survivors said they rang Australian authorities for help on Thursday when both the boat's engines broke.
The boat just flipped and we start to swim, and [those] who can swim survived.
Shipwreck survivor
"I called the Australian Government like 12 times. I told them we have 35 children," one survivor said.
"We don't want to go to Australia, just take us out of the water.
"We don't want to die. It's our mistake, not the children's mistake."
He said help was promised but in 24 hours nobody came.
By Indonesia correspondent George Roberts for ABC Australia