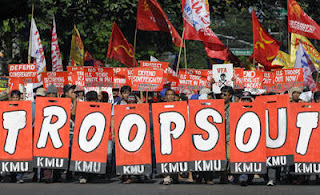 The Philippines should conduct the negotiations with respect to the revision of the Visiting Forces Agreement (VFA), mindful of the shifts in the global balance of power, the full range of threats to our security, and all the options to extend security, including economic interests

Since the signing of the VFA in 1999, there have been strategic developments both in Asia and elsewhere, and shifts in the axis of power.

The so-called “US pivot to Asia” is a reaction to these changes taking
place.

Historically, the US pivot to Asia may be said to have begun in the 19th century when the United States invaded the Philippine Islands during the Spanish American War of 1898. This conflict recorded the first misunderstanding between the Americans and Filipinos, which led to the Philippine American War.

Commodore George Dewey denied that he had struck a deal with President Emilio Aguinaldo for Philippine support for the American invasion of the Walled City of Manila. At that time, international law was defined as the body of rules binding upon “civilized states” in their relations with one another. The Philippines did not qualify as a subject of international law, with rights and duties under this law. This is the background for the famous anecdote of President William McKinley praying to God, and deciding thereafter to annex the Philippines.

Clearly, the renegotiation of the VFA provides the occasion to establish a clear understanding of the scope and conditions for the visits of US naval vessels, planes and troops to the Philippines on a proposed “rotational basis.”

This occasion also provides the opportunity for the Philippines to re-visit the Mutual Defense Treaty (MDT) with the United States, on which the VFA is based, and to address the issues on which there has been dissatisfaction on the part of critics of this treaty. These include the issue that the MDT does not provide for automatic operation of the treaty in case of an attack on the Philippines as in the case of the NATO treaty, that the defense treaty is not clear on whether it provides protection for the islands and rocks outside the Philippines’ archipelagic baselines but within its Economic Exclusive Zone (EEZ), and that the said treaty has not been of sufficient help with respect to the modernization of the Armed Forces of the Philippines.

At the outset, it should be pointed out that the VFA signed in 1999 covered only visits approved by the Philippine Government.

Nevertheless, as the USA is the world’s superpower, the Philippines should be mindful of a number of scenarios that could take place, given the tensions in areas near the Philippines. What will happen, for example, should the United States launch a military strike against Iran in the Gulf or against North Korea in the Korean peninsula and the Philippines should opt to stay out of the conflict? Under international law, the Philippines would have obligations as a neutral state not to allow its territory to be used as a staging point.

The Philippines has a special concern with what happens in the Middle East, the Gulf, and the Korean peninsula. It has a big diaspora in countries in all of these potential conflict areas, and this gives the Philippines a global reach.

A scenario closer to home is conflict taking place in the Taiwan Straits although this scenario is not likely, given the improved relations between China and Taiwan.

In the past, the presence of the US 7th Fleet impeded the invasion of Taiwan from the Chinese mainland. If war should break out in the Taiwan Straits, and the United States intervenes, US armed forces present in the Philippines would be exposed to attack.

Critics of the VFA point to this scenario and argue that the Philippines should revoke the VFA because they think of the Philippines as a small country, which will be crushed in a fight between two elephants. Moreover, it is also argued that the USA is a declining power and that in time, China will become the dominant superpower.

This rising economic superpower is the immediate threat to the Philippines’ security with it’s armed occupation of Bajo de Masinloc (Scarborough Shoal) and Mischief Reef and its continuing threat to seize other submerged features and protruding rocks within the Philippines’ Continental Shelf and Exclusive Economic Zone. It is through this prism that Filipinos today view the Philippines’ strategic relations with China.

Some political analysts argue that the crisis over Masinloc has come about as a result of China’s apprehension to the so-called US pivot to the Asia Pacific region and its reaction to the increased military presence of the United States in the Philippines under the VFA. It is China engaging in shadow boxing with the United States. The Philippines evidently is no match militarily and has the weakest armed forces in the region, although they have experience in combat and as peacekeeping forces.

Not only is the Philippines strategically important because of its geographical location at the center of the maritime region where half of the world’s cargo passes but the Philippines plays a strategic role in international commerce. It is the backbone of the shipping industry, being the biggest seafaring country in the world. These are the strengths that the Philippines brings to the negotiating table. The main concern of the Philippines is the protection of its sovereign rights over its continental shelf and exclusive economic zone. The Philippines has adopted a three- pronged strategy to achieve this end by bringing a case before the Arbitral Tribunal of the Law of the Sea, a dialogue with China bilaterally and in the Asean forums, and inviting the attention of the United States to the tensions in the West Philippine Sea under its defense arrangements.

The on-going talks on a new Access Agreement on a “rotational basis” is recognition by the United States of having neglected its interests in the Asia Pacific and leaving the countries in Southeast Asia exposed to the growing economic and military power of China. The Philippines was constrained to have its own pivot to China under President Gloria Macapagal Arroyo. The so-called pivot of the United States to Asia Pacific is to prevent the region from falling within China’s sphere of influence.

The Philippines has benefited from the VFA. It has received assistance in setting up its Coast Watch System (basically a national radar system for its maritime domain awareness) related to protecting its marine resources. It has also received assistance in disaster management as the Philippines is prone to typhoons and other calamities, and beefing up its national security and counter-terrorism capabilities, important for Mindanao.

However, the Philippines has received only equivocal commitments from the United States with respect to the defense of the Philippines’ sovereign rights in its continental shelf and exclusive economic zone in the West Philippine Seas unlike the commitment given to Japan over Japan’s administration of the disputed Senkaku/Diayao Island. Secretary of State Hilary Clinton explicitly guaranteed US support for all Japanese territory, including the Senkaku/Diayao Islands, under its Mutual Defense Treaty with Japan.

It should be noted that the Philippines’ mainland is not perceived to be under threat of external attack. Only its maritime territory is subject to Chinese aggression.

In any event, the Philippines should look down the road in the next years for a cost-benefit analysis of whether security guarantees/ support will continue to be more important than sustained Chinese investment over the next 20-30 years. As an alternative to security guarantees, the Philippines should develop a strategy of building a web of interlocking economic interests as a shield against external attack.

Supporting this strategy would be greater reliance on international law, which should be a guiding principle of Philippine foreign policy.

Ambassador Jaime S. Bautista, is a doctor of laws and Secretary General of the Philippine Ambassadors Foundation