Indonesia approves plan to buy a million hectares of Australian farmland (yet Indonesia prohibits Aussies from buying land in Indonesia!) 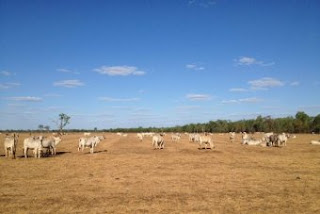 
The Indonesian government has approved a plan to buy a million hectares of Australian farmland to breed its own cattle.

Beef prices in Indonesia have hit record prices over the past year as demand failed to meet supply.

The country's so called self-sufficiency policy has been blamed because it restricted imports from Australia and elsewhere.

To lower prices Indonesia's eased some restrictions until the end of 2013, however, local production has been unable to keep pace with domestic demand, prompting Indonesia's
Government's come up with a more permanent solution.

Dahlan Iskan is quoted by local media saying it is cheaper to breed cattle in Australia and then bring them to Indonesian feedlots.

He says the plan would be in addition to Indonesia's domestic breeding program.


Once appropriate land is found, Australia's Foreign Investment Review Board would have to allow Indonesia to buy it. Indonesia Correspondent George Roberts
Photo: Indonesia's local beef production can't keep pace with domestic demand, prompting the country to pursue the purchase of Australian farmland. (Matt Brann)
Posted by Kerry B. Collison at 2:38 PM