Vietnam’s Need for the Trans-Pacific Partnership 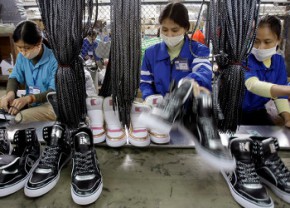 A lot of regional prosperity hangs on the outcome of multilateral trade negotiations, though they aren't the sort of event that that makes pulses race. Take the Trans-Pacific Partnership, or TPP: 12 very dissimilar nations met in Brunei August 23-30 for their 19th round of talks, and the only news after another week's effort was that they've kicked the can down the road again.

There won't be a pact for the heads of state to sign in October. Is that a bad sign if you're a free trader? A good sign if you're a protectionist or one of those folks who think "globalization" is a dirty word? Or is it just evidence that the governments that supervise 40 percent of the world's wealth are going to take whatever time it takes to get right what Washington calls the world's first "21st Century trade agreement?"

They are an odd and asymmetrical bunch, these 12 nations. Chile, Peru, Mexico. The US and Canada. Singapore, Malaysia, Brunei and Vietnam. New Zealand and Australia. And now also Japan but not, conspicuously, either Korea or China. The 12 are engaged, it's said, because the only way to persuade Washington in particular to open its markets wider to the goods they produce is to accomodate the demands of America's knowledge-intensive industries -- banking, insurance, finance, telecommunications, pharmaceuticals, entertainment -- for equal access to foreign markets and respect for intellectual property rights.

This is complicated and seriously arcane stuff, which hasn't deterred policy analysts from trying to explain it. Two decent efforts, each in the 20,000 word range, are found here and here.

Another way to understand the possibilities inherent in the Trans-Pacific Partnership is to examine the negotiation from a national perspective -- from Vietnam's, for example. Why would a nation that's just barely pulled itself above the poverty line aspire to run with the big boys?

To some analysts -- for example to Greg Rushford, whose 'Rushford Report' is must reading for Washington trade lobbyists -- for Vietnam, it's all about textiles and footwear. Since Vietnam dumped socialism a quarter-century ago, it has carved out a sturdy niche as a supplier of knit shirts, athletic shoes and kindred items to the American market.

Garment and footwear assembly are labor-intensive industries that have consistently accounted for about 20 percent of Vietnam's total exports. They got their start in the 1990s because under the EU and US quota schemes then operative, China's exports of garments and footwear were capped. Some final assembly operations were shifted to Vietnam to take advantage of its quota. These plants were the first wave of Vietnam's export-driven industrialization. They became so efficient that they survived the end of the quota regimes and in fact gained market share.

Specifications are provided by retailers who also arrange supply of fabric and leather, thread, zippers, buttons, etc., typically from China; the goods are assembled in Vietnam's low-wage factories and shipped out to the US, Europe or Japan. Competition is fierce.

A few years back, Vietnam was being touted as "the next China." Garment and footwear manufacturers in Guangdong were going to migrate en masse to Vietnam, it was said, lured by unit labor costs about 30 percent of China's. It didn't happen. For cutting and stitching, it turned out, even cheaper labor was readily available in Cambodia, Bangladesh or the new fave, Burma. For everything else, Chinese factories just got more efficient.

Vietnamese contract manufacturers are under tremendous pressure to hold wages down. Workers are demanding better pay, while few garment or footwear plant owners can afford to invest in more efficient machinery. To them the TPP looks like a life raft. Hanoi sees an extraordinary opportunity to expand its share of the limitless American market for sportswear at China's expense -- that is, if Washington will cooperate.

American trade negotiators would like to be helpful. K-Mart and Wal-Mart, Nike and Levi Strauss and other retailers that source their merchandise abroad want them to be helpful. Companies that still spin cotton thread in the US do not. They are putting tremendous pressure on Washington to preserve a system called "yarn forward" and retain tariff protection for the US garment industry , which now averages 17 percent on Vietnamese goods. On a parallel track, the last American shoemakers are pressing for the continuance of import tariffs ranging from 11 to 70 percent.

The yarn-forward doctrine requires that every stage in the manufacture of a garment take place either in the US or with a favored trading partner, e.g., if the TPP goes into effect, in Vietnam or other TPP members. Even the smallest bit of non-TPP content would render the garment ineligible for a zero tariff. The yarn-forward requirement would rip asunder value chains that supply assembly plants in the Red River Delta and the suburbs of Ho Chi Minh City with Chinese fabric, leather, thread, zippers, buttons, etc. Vietnamese negotiators have protested that yarn-forward is a deal breaker. They seem, if hints in Vietnamese media bear out, to have won Washington's promise of a three-year adjustment period. And that, if Vietnam is agile, is all it needs to eat Guangdong's lunch.

In this scenario, ironically, it won't be the American yarn spinners that benefit, but rather the Taiwanese, Korean and Chinese entrepreneurs who would rush to relocate those thread, textile, button and zipper factories into Vietnam, cheered on by their American customers. By one all-else-being-equal calculation, there would be a huge increase in Vietnam's export earnings. In 2025, forecasts the Peterson Institute, Vietnam would be 14 percent richer than if it stays out of the TPP. That's unless China also joins the TPP, not a near term prospect but not unthinkable either. Suffice it to say here that trade analysts agree that among the 12 nations now negotiating, Vietnam would gain the most from establishment of the TPP.

No Free Lunch
Analysts offer that Vietnam is welcomed as a TPP negotiator precisely because it is not China. They reason that China will not accept the "disciplines" integral to this 21st century pact: a level playing field for foreign and domestic entities, vigorous enforcement of intellectual property rights, autonomous labor unions, a foreign investor's right to force compulsory arbitration by an international panel on Beijing if it believes its rights have been impaired.

Some speculate that the TPP, like the rest of the American 'pivot' strategy, aims to contain the bumptiously rising new superpower. A more subtle explanation is also plausible: that with Vietnam as a compliant proxy, Washington aims to show Beijing what might be possible if it chooses cooperation rather than confrontation.

Either way, there's reason to wonder if Vietnam would step up to those disciplines, if it is indeed capable politically or bureaucratically of levelling the playing field for foreign investors.

Vietnam's enterprise system is only half-free, and there's the rub. For two decades, economic reformers and power brokers have been at odds. Alongside a dynamic, export-oriented private sector, a state-owned enterprise (SOE) sector still dominates Vietnam's domestic economy. It deploys sixty percent of the nation's assets but produces only forty percent of its wealth. Cheered on by the ADB and World Bank, reformers aspire to break up and privatise the SOEs, but they have regularly been frustrated by the cozy alliance between public officials and their cronies in the state enterprise sector.

Some speculate that PM Nguyen Tan Dung and his government are keen to take Vietnam into the TPP precisely because it offers a way to outflank the ruling Communist Party's status quo faction and force change on change-resistant institutions. That may be so; it won't be easy. Bundled into the price of admission to the TPP for Vietnam are commitments that would be exceedingly hard to deliver. These include:
Six years ago, admission to the World Trade Organization (WTO) was touted as the step that would ensure Vietnam's competitive success in the global economy. It didn't work out quite that way. The expected tsunami of foreign investment materialized, but far too much of the cash inflow was routed to SOEs that squandered it on speculative ventures.

After two fierce bouts of inflation and a vain attempt to maintain growth rates in the teeth of worldwide recession, new foreign investment had dried up and Vietnam's economy was in the tank. The government at last tightened credit in 2011, averting more defaults but starving Vietnam's private sector of the funds it needed to profit from the recovery of the global economy. Now the nation's cash-short native capitalists still struggle while, ironically, the foreign-invested sector is booming.

Thus in addition to dealing with resistance by status quo elements within the regime, Dung's government must also contend with skepticism that the TPP will live up to advance billing. Most Vietnamese economists and businessmen would be happy to see the reforms that the pact will mandate but doubt they'll materialize. At the same time, well aware of barriers concocted by Americans to limit imports of Vietnam's shrimp and catfish, they wonder if Washington in particular will live up to its own market opening commitments.

Regardless of doubts, it looks as though Hanoi is committed to going forward. Commentary in media close to the regime recognizes challenges but expresses optimism. "The TPP agreement is a good playing field for economies like ours to boost the development of key sectors such as garments, footwear and farm produce" says Voice of Vietnam. "After we join the agreement, there will be a strong flow of foreign goods and direct investment into Vietnam, providing the nation with fresh impetus for stronger growth." And, many hope, also for reform.