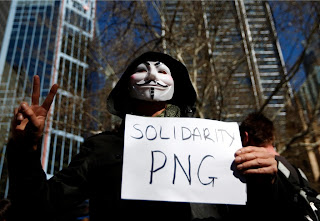 A man wearing a Guy Fawkes mask holds a placard encouraging solidarity with Papua New Guinea during an August 24 protest in Sydney, Australia

The right to peacefully advocate referendums is a part of freedom of expression and Indonesian authorities must drop charges brought against Papuan activists, Amnesty International demanded on Tuesday.

This would include Apolos Sewa, Yohanis Goram, Amandus Mirino and Samuel Klasjok, members of the Sorong branch of the Papuan Customary Council who were arrested on August 28 following a peaceful gathering at the Maranatha Church in West Papua.

The event was intended to raise the profile of Freedom Flotilla, an Australian organization that, as per its website, aims to create a link between indigenous people in Australia and Indonesia and shed light on the reasons why alleged human rights abuses in West Papua don’t draw the attention of the international community.

The “Morning Star” flag, a symbol of Papuan independence, was raised alongside Australian aborigine flags at the church. The four men, who Sorong Police arrested and interrogated without legal counsel present, were charged with rebellion, which can carry a life imprisonment sentence.
Amnesty, while not taking a position on the political status of any province, claims that the right to freedom of expression includes the right to peacefully advocate independence and other political solutions except where it would involve incitement to discrimination, hostility or violence.

“Amnesty International believes the four men were arrested and charged solely for their peaceful political activism,” the organization said in a statement on Wednesday. It also claimed that the Indonesian authorities continue to curtail access of international human rights organizations and foreign journalists to the provinces of Papua and West Papua. Even so, human rights abuses have been frequently documented there.

“Allow international journalists into Papua and facilitate visits by the Special Rapporteurs of the UN Human Rights Council,” Navanethem Pillay the UN High Commissioner for Human Rights, urged in May, the same month Indonesian security forces reportedly opened fire on a gathering commemorating the 50th anniversary of the handover of Papua to the Indonesian government.
The violent turn of events resulted in the killing of Abner Malagawak and Thomas Blesia on the spot, and the death of Salomina Kalaibin, six days later, due to gunshot wounds.

According to Amnesty, there are currently at least 70 people imprisoned in Indonesia for attending, organizing or participating in peaceful political activities or protests in Papua. The “special autonomy plus” program recently touted by President Yudhoyono would see the release of more than 50 people arrested for participating in protests coinciding with the date Papua became part of Indonesia.