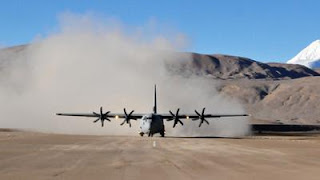 New Delhi’s poor manoeuvring has left it without a robust strategic policy in Central Asia, a region critical for India’s energy, trade and security needs. This lack of direction raises doubts about India’s capacity to maintain strategic partnerships across the region, and whether its strategic planning can match its world power aspirations. If India is to reverse the lacklustre performance of its ‘Connect Central Asia Policy’, it needs to offset its strategic setbacks in Tajikistan, particularly now that India has lost its use of Tajikistan’s Ayni airbase

As India’s closest Central Asian neighbour, the distance between Tajikistan’s capital, Dushanbe, and New Delhi and is approximately the same distance between New Delhi and Mumbai. More significantly, Tajikistan’s southeastern border is less than 30 kilometres from Pakistani-administered Kashmir across Afghanistan’s Wakhan corridor. India’s only foreign airbase is located in Tajikistan, at Farkhor on the Tajik–Afghan border. Following Pakistan’s ban of Indian overflights, India started operating the Farkhor base in May 2002, with Russian acquiescence, to support Indian relief and reconstruction efforts in Afghanistan. India’s involvement at Farkhor began with its operation of a military hospital that treated Northern Alliance fighters. But after the US-led Operation Enduring Freedom drove the Taliban from power and led to the establishment of NATO’s ISAF presence in Afghanistan, India closed the hospital. This move alone indicates a lack of sound strategic planning given India recently established a new India–Tajik Friendship Hospital in southern Tajikistan to bolster its standing with Dushanbe — yet India’s lack of broader operations at the Farkhor base also raises doubt.

Without firm evidence of any Indian combat squadrons at Farkhor, the airbase does not provide India with an alternative attack route against Pakistan or the ability to affect militant operations in Kashmir. The base’s main function is to transport India’s relief and reconstruction supplies into Afghanistan. India airlifts resources to Tajikistan’s Ayni airforce base located about 15 kilometres from Dushanbe and then transports material approximately 150 kilometres to Farkhor, where it is then trucked to Afghanistan. Thus, the Ayni airbase has been the key to India’s strategic footprint in Tajikistan, and its loss represents a grave strategic setback.

The Ayni airbase, originally used by the Soviets during the 1980s, was abandoned after their withdrawal from Afghanistan. India contributed technical assistance and US$70 million to renovate the airbase between 2003 and 2010. India’s Border Roads Organisation (BRO), directed by India’s Army Corps of Engineers, extended the main runway, built a control tower and constructed three hangars capable of housing squadrons of MiG-29 bombers used by the Indian Air Force. In September 2010, Tajik Defence Ministry spokesman Faridun Muhammadaliev also confirmed to the press that the Ayni airbase had state-of-the-art navigational and defence technology and a runway extended to 3,200 metres to accommodate all types of aircraft.

Nonetheless, the airbase remains unused. There are no reports of Indian combat aircraft having ever been stationed at the base. Tajikistan’s small air force does not need it. Russia’s 201st Motor Rifle Division (MRD), Moscow’s largest military contingent abroad, is stationed in Dushanbe and two other Tajik cities. Moscow is also intent on preventing other foreign nations from using the base. Although the BRO began the Ayni renovations in 2004, New Delhi seems never to have developed a coherent vision of how to use the base or leverage its position with the Tajik government. Dushanbe may have simply used New Delhi to force a better deal from Moscow for Russian use of Ayni and the bases housing the 201st MRD.

In December 2010, Tajikistan announced that Russia was the only country under consideration to use the Ayni airbase in future. The two countries are now negotiating the details of their future military cooperation and, most likely, Russian support for Tajik president Emomali Rahmon’s November 2013 re-election bid. India, on the other hand, has been effectively closed out of Ayni. While the Times of India reported in April 2013 that India maintains over 100 personnel at the Ayni base, there is no corroborating evidence for the newspaper’s portrayal of the facility ‘as a kind of “military outpost”’ for India.

Despite the decade-long opportunity provided by the United States’ regional presence for New Delhi to develop an expanded role in Central Asia, India does not project any significant military or economic power in the region. And although India and Tajikistan share security concerns about Islamist militancy, there is no meaningful security cooperation between the two countries. The Indian armed forces have not participated in counter-terrorism military exercises in Tajikistan like the Chinese PLA and Russian military did in June 2012.

With NATO’s 2014 Afghanistan withdrawal, China and Pakistan are well placed to prevent India from projecting any hard power in Central Asia. Unless India can act as a strategic partner in an Indo–American ‘New Silk Road’ framework, it will watch from the sidelines as the Shanghai Cooperation Organisation constructs its own New Silk Road.