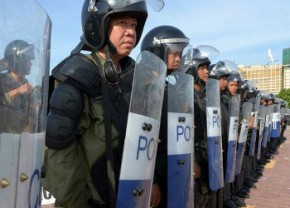 Can the Cambodian People's Party reform itself?

Cambodia's recent alarming election results have highlighted deep-seated popular discontent towards the performance of the government and the way it appears to have failed to address pressing fundamental economic, social and governance issues that have negatively impacted the daily life of the Cambodian people.

That discontent was expressed by voters in July 28 national elections that gave Prime Minister Hun Sen and the Cambodian People's Party a severe shock, with the opposition winning 55 seats in the Parliament compared with the CPP winning 68. It was Prime Minister Hun Sen's largest fall in support since UN-supervised elections in 1993 and could well have been bigger.

The opposition Cambodia National Rescue Party, led by Paris-educated former banker Sam Rainsy, has vowed to keep the pressure on, although the government, with a no-nonsense warning, limited a recent mass rally to just 10,000 participants on September 7, the eve of the official electoral results announcement by the NEC. The opposition now has largely resigned itself to minority status for the five years to the next election.

Known for its disciplined organization, the Cambodian People's Party is now faced with unprecedented and daunting challenges to effectively respond, adapt and move ahead to swiftly reform itself and the government to regain the needed credibility and confidence of the people. The depth, breadth and pace of reforms need to be assessed within the time-binding constraints of the next five years and way beyond.

This requires a strong political will to tackle and promote a mindset change within the party and the government. As severe as this 2013 general elections setback could be for the CPP, it could also provide an unprecedented historical opportunity to rise to the challenge and lay out a new economic, cultural and social foundation that would enable Cambodia to become an economic powerhouse, relevant to the region and to the world, that our Angkorian forefathers and the generations to come would be proud of.

Mindset change is hard but possible if it is well designed and can touch the heart and minds of the people. Lee Kuan Yew, the founder of modern Singapore, was very successful if sometimes distressingly authoritarian, as did the Meiji Emperor for Japan after the arrival of Commodore Matthew Perry's Black Ships in 1853, ending 200 years of self-imposed isolation.

Both created unprecedented sustainable prosperity for their nations and people and could be viewed as the equivalent of the 20th century Jayavarman VII, whose 30-year reign in the 12th Century resulted in the flowering of the Khmer Empire. The main challenge, however, remains within ourselves as what the famed scientist Albert Einstein said rightly: "We cannot solve our problems with the same thinking we used when we created them".

Neither should we also fall into the temptation of "change to remain unchanged" as cosmetic change is not change but just a way to perpetuate our usual habits, values and mindset, which have proven to be rather ineffective in addressing the toughest economic and societal issues at stake.

Well intended policies have been conceived, unfortunately they fell short due to the absence of urgency, weak implementation and coordination, weak accountability as political correctness has been rewarded more than results, which has culminated in widespread ineptitude in many line ministries.

The donor-influenced and western-imported mindset has not changed Cambodia's status as a Third World country. In comparison, let us look back in perspective to the "Sangkum Reas Niyum" era under then Prince Norodom Sihanouk, who displayed leadership wisdom and at the same time was able to project Cambodia's position into the global arena. Cambodia had a thriving economy within Southeast Asia in the 1960s, and was a founding member of the Non Aligned Movement. Sihanouk sat as equal among the great statesmen of those times like Nasser, Nehru, and Sukarno. Whoever holds power in Cambodia in the next decade should have the bold vision of setting a new development path for the country. Would there be a Cambodian leader cut out for this challenge?

(David (Vichet) Van is a Cambodian professional serving an advisory role in various public and private institutions and describes himself as a simple Khmer citizen.)
Bottom of Form
Bottom of Form