The twin faces of Japanese nationalism 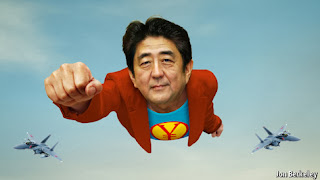 In contemporary Japan, national memory is an ideological battleground. The future of Japan’s nationalism, its postwar pacifist regime, and the international relations of the Asia Pacific depend on whose history prevails.

When world-renowned animation director Hayao Miyazaki’s new film, The Wind Rises (Kaze Tachinu), was released in July this year, it unleashed a storm of controversy. The film is a nuanced tribute to Jiro Horikoshi, designer of the legendary Mitsubishi A6M Zero fighter in World War II. A director with pacifist and socialist leanings, Miyazaki offered a layered look on how Horikoshi’s naive enthusiasm for engineering design was captured by militarism. In his own words, he wished to ‘take back the Zero fighter from the hands of military technology nuts and military fantasy novels’. The film was released amid Japan’s public debate on the revision of its pacifist constitution, which forbids Japan to wage war, and right-wingers pounced, labelling Miyazaki ‘anti-Japanese’ and a ‘traitor’.

If Miyazaki represents the best of Japan’s progressive view, then Yoshinori Kobayashi is a neo-nationalist at its extreme. A bestselling author and manga artist, Kobayashi is infamous for his manga On War (Sensoron), which denied the Nanking Massacre and portrayed comfort women as prostitutes out to exploit Japan. 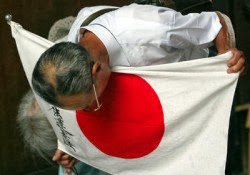 Miyazaki and Kobayashi represent two different influential alternatives of historical memory. The progressive view (shinposhugi shikan) denounces Japanese history before World War II as an expression of imperialist aggression. In contrast, the liberalist view (jiyushugi shikan), propagated by conservative circles such as the Japanese Society for History Textbook Reform, attempts to establish national pride not on the basis of Japan’s culture and economic success but by reinterpreting its modern history.

There is a third, arguably the most widespread, alternative — the Shiba view of history (Shiba shikan) — popularised by the favourite novel Clouds above the Hill (Saka no Ue no Kumo), originally published serially by Ryotaro Shiba from 1968 to 1972. Shiba’s epic portrays Japan before its victory in the 1905 Russo–Japanese War as the energetic and ambitious spirit of the Meiji Era (1868–1912) whose people propelled the country to the ranks of the great powers. But in the following period, Japan became self-centred and turned towards militarism, which led, eventually, to the ruins of the Pacific War. In other words, Shiba’s view of history emphasises the positive aspects of the Meiji Era up until 1905 when Japan was open and progressive.

Like the different expressions of historical memory, different faces of nationalism have emerged during different periods in Japan’s history. The negative face was characterised by the aggression and militarism of the late Taisho Era (1912–26) to the early Showa Era (1926–89). The positive one is a sense of national pride and confidence, and a desire for self-determination, most prominently displayed during the Meiji reforms and the postwar economic miracle.
Since returning to the prime ministership in December 2012, Shinzo Abe has governed on a platform of revitalising Japan’s economy and strengthening its military. This programme evokes the twin faces of nationalism in Japan. 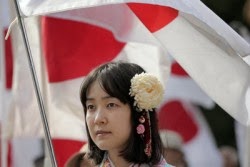 On the one hand, Abe has overcome the economic defeatism that has plagued Japan over the past two decades. His embrace of unorthodox economic measures, dubbed ‘Abenomics’, has brought signs of growth and earned praise. In July 2013, voters rewarded Abe’s determination to fix the economy by giving the ruling coalition control of the upper house, putting an end to the ‘twisted parliament’ that has caused policy paralysis since 2007.

On the other hand, Abe has raised the ghost of militaristic nationalism. He is known for his nationalist rhetoric, revisionist view of Japanese history, and advocacy for a more muscular defence posture. He has long coveted a conservative remaking of Japan’s public life and national security through revision of the postwar pacifist constitution.

But Abe understands that he was elected despite, not because of, his revisionist view. Most ordinary Japanese are drawn to Abe’s political leadership because it has engendered economic optimism. The widespread popularity of The Wind Rises and Clouds above the Hill shows that while most Japanese may be nationalists, they are not militarists. According to a recent Pew survey, 56 per cent of Japanese still oppose constitutional revision.

Furthermore, Abe has to operate in a realistic foreign policy environment. Unwise provocations over history could disrupt regional trade relations with China and others, and complicate the security relationship between the United States, Japan and South Korea. When early in his second term Abe sought to reinterpret official apologies made by previous governments for wartime acts, he was forced to back down after pressure from the United States, which sees Japan as crucial to its ‘rebalancing’ strategy.

Two decades of economic stagnation and years of political drift have despaired many Japanese, but under Abe’s administration the will to change has returned to Japan. In February this year, Abe declared to an audience in Washington that ‘I am back, and so shall Japan be’. In July, he told another audience in Singapore that he is a strong reformist in the economic realm by making multiple references to Margaret Thatcher.

The concern, however, is not Japan’s nationalist turn but how it will choose between the two faces of nationalism. As Joseph Nye put it, ‘if a moderate nationalism is harnessed to the yoke of political reform, the results could be good for Japan — and for the rest of the world’.

Japan can and should become a more capable, more autonomous and more ‘normal’ nation. In the process, the real danger comes in allowing the negative nationalists to claim victory in the battlefield of national memory for their own ends. Alternatively, Japan can choose to summon positive nationalism not only as a force to muster a meaning of national purpose but also as a sense of justice with the courage to face its historical responsibilities.

Andy Yee is a policy analyst for Google in Asia Pacific. He has worked at the Political Section of the EU Delegation to China in Beijing.