Who is to blame for the worst graduate job market in China’s history? 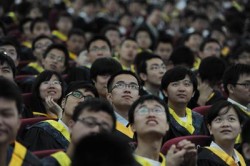 Approximately 6.99 million students will graduate this year from Chinese colleges and universities, a new all-time high. This reflects China’s attempt to upgrade its workforce by promoting higher education. But the labour market is sending some rather disappointing messages. Against the backdrop of the troubled world economy and faltering domestic demand, companies in China are increasingly losing their appetite for new hires

The Chinese media predicts that 2013 will be the most difficult job-hunting year in history for university graduates. So who is to blame for this? And what can be done to fix it?

The core of the job shortage is not so much about low-skilled persons seeking jobs but rather the difficulties faced by highly-educated persons in finding employment. Universities are a key supplier of human resources for the labour market, but their capacity to enhance the employability of graduates is constrained in at least three ways.

The first relates to the definition of the aims of higher education. In the wake of China’s opening-up, market-based values have gained momentum in all aspects of Chinese society. People have increasingly identified with previously unheard of concepts such as competition and profitability. Chinese companies have been constantly changing their requirements for competencies to survive and grow in the market. Within this context, there is an obvious gap between what graduates are taught at university and the short-term usable skills favoured by the labour market. The goals of higher education have long been defined in a very general sense without sufficient acknowledgement of the changing nature of the economy and society. Do universities educate students to obtain knowledge for the sake of it? Or should they focus exclusively on practical skills? Investigation of these questions is complicated by the fact that an objective judgement on what constitutes useful knowledge at the current stage of China’s development is debatable. The general competencies targeted by the higher education sector are ill defined, and this has subsequently had a negative influence on the curriculum and pedagogy.

The second constraint points to the role of career services within universities. In recognition of the congestion of the graduate labour market, universities have made efforts to develop their career services to provide support to students. The range of support provided mainly includes collecting and distributing information related to job vacancies, providing career guidance and consultation, and managing other administrative issues. While university career service centres do build a connection between students and the labour market, their effectiveness has been limited by an insufficient number of specialists, support staff and function spaces. This is not surprising. Many universities were not well-prepared for the large intake of students in the first place and borrowed heavily to develop the necessary resources to accommodate changes. Fixing this will involve increasing educational funds and improving regulations.


The third constraint relates to the extent to which universities interact with other agencies to improve the graduate labour market system. The current two-level system of managing higher education institutes builds upon other policy shifts that aimed to reduce direct intervention from the government. The two-level system means universities are managed by the central or provincial governments, with provincial governments playing the major role. This means that for universities geographically located in municipal cities or towns, their administrative rank is higher than that of the local bureaucracies that are in charge of education, human resources or social securities. This limits communications and hinders the kind of cooperation that would allow them to provide a more diversified channel for sharing information and synergising resources.

The daunting job market for university graduates affects many beyond just the students and their families that have invested heavily in higher education. Job-hunt difficulties mask several problems within the system itself that may impact on people’s confidence in the reforms that are designed, implemented and planned during China’s transition. They may also affect social stability and challenge the younger generation’s confidence in whether the ‘China Dream’ — a set of ideals which aspires toward national rejuvenation and the improvement of livelihoods — is within their reach. Tackling this issue will require a holistic approach that takes into account the wider context of national economic and social transition.

Shuang Ren is a Post-Doctoral Research Fellow at the Centre for Ethical Leadership, University of Melbourne