The United States is in no position to intervene on the basis of unsubstantiated claims in Syria. Faith in American ethical principles and democratic freedoms has disappeared like a toxic mist 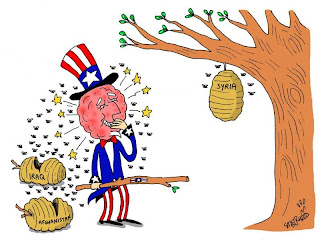 Failing to learn from previous mistakes, which side should the US support to benefit its vested interests in the region? Both sides are guilty of heinous crimes against humanity, and hypocritical Western-intervention delusions will do little to end the violence.

Under the Reagan administration, the US supported the use of chemical weapons against Iran, resulting in tens of thousands of deaths during the Iran-Iraq war from 1980 to 1988, culminating when Sadaam Hussein gassed 5,000 Kurds in 1988, with the US military's tacit consent. During the Vietnam War, defoliants such as Agent Orange and the nerve agent sarin disfigured faces by fusing skin to bone. The horrific war created a medical and environmental catastrophe with no redress or compensation to the mutilated victims. By1975, more than 10 per cent of Vietnam had been intensively sprayed with 72 million litres of chemicals, of which 66 per cent was Agent Orange, laced with its super-strain of toxic TCCD.

Let's not allow an unnecessary war to happen again. Bottom line: Wouldn't we all be better off if Washington were to gradually disengage diplomatically and militarily from Mideast intervention and concentrate instead on ensuring civil rights, creating jobs, balancing the budget, helping the poor help themselves and getting the derailed US domestic agenda back on the fast track? Charles Frederickson  Bangkok