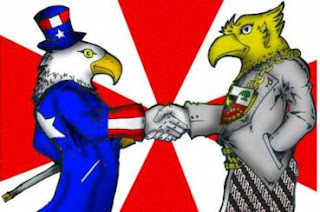 Defense Secretary Chuck Hagel toured Southeast Asia several weeks ago. In Brunei, he met with the ten defense ministers from the Association of Southeast Asian Nations (ASEAN) and their seven counterparts from Australia, China, India, Japan, New Zealand, Russia and South Korea. En route and afterwards, he stopped in Malaysia, Indonesia and the Philippines

With so much global media focused on Syria, Hagel tried to redirect some attention to the administration’s efforts to strengthen relationships with our Asian security partners. In Kuala Lumpur, he referenced the “more than 75 activities, exchanges, and visits with the Malaysian military... designed to boost its capability and help it become a more professional and flexible force.” In Jakarta, he announced the sale of eight new Apache attack helicopters to Indonesia—an example, he said, of “our commitment to help build Indonesia’s military capability.”

In Manila, he declared the U.S.-Philippines alliance “an anchor for peace and stability and prosperity” and lent the prestige of his office to ongoing negotiations for enhanced U.S.-Philippines defense cooperation. Like the new rotations of Marine and Air Force units through Australia and basing of littoral combat ships in Singapore, more regular rotations, joint exercises and prepositioning of equipment in the Philippines is positive for both sides.

Surely, however, the impact of these new initiatives is intended to be far greater than the sum of their parts. Because in and of themselves, they do not add enough military capability beyond what Washington already can call on in the Western Pacific to make much of a difference. The United States already conducts hundreds of port calls and dozens of bilateral and multilateral military exercises, and has done so for many years. It has been intensively engaged in helping reform and modernize the Philippines armed forces since 1999. The new initiatives, while welcome, are no different in kind from what’s been offered by previous administrations.

The weapons sales, deployment schedules and photo ops with Secretary Hagel serve primarily, then, as public-relations data points furthering the “pivot to Asia” narrative desired by the administration. They are all of a piece with the many other cabinet-level visits to the region over the last five years: Secretary Panetta’s visit to Cam Ranh Bay, Secretary Clinton’s visit to an American destroyer in Manila Bay, and initiatives from the low-cost Lower Mekong Initiative to the twelve-nation Trans-Pacific Partnership free trade agreement.

There are two conceivable rationales for the “pivot.”

One is that the administration is trying to balance China. This is the view usually taken by both geopolitically-minded friends of the administration and China-skeptical conservatives. The former wring their hands over Chinese reaction; the latter quietly cheer the administration’s attention to Asia, even as they despair the lack of material resources devoted to it.

The other rationale is a much more amorphous effort to build American soft power. This approach, favored in public statements from the administration, has no explicit target. Administration spokesmen insist that the last thing it is meant to do is counter China’s growing power and influence. And given the administration’s dogged outreach to China—despite all the negative behavioral feedback from Beijing—that certainly seems to be the case.

By the geopolitical measure, the policy is indeed succeeding in creating the impression of U.S.-Chinese great-power competition in Southeast Asia. The problem is that the geopolitical game could simply be a figment of Washington’s imagination.

Standard analysis would classify Southeast Asia states and ASEAN as either acting to balance a rising China or “bandwagoning” with it. In truth, many are doing neither.

ASEAN was created in 1967, at the height of the Cold War, to expand its members’ decision-making space, not constrain it through new alliances. This principled concern with autonomy—and the collective power to realize it—has only increased over time. Today, when hedging against China or anyone else, Southeast Asian states do so by taking all comers, including the Chinese. As an example of this, consider the countervailing photo ops from last month. While Secretary Hagel was travelling around the region, Chinese foreign minister Wang Yi was hosting the ten ASEAN Foreign Ministers in Beijing. Following the Secretary’s tour, Premier Li Keqiang welcomed heads of Southeast Asian governments to Nanning.

For 40-plus years, ASEAN has simultaneously maintained peace among its members and expanded economic opportunity for them. With confidence borne of this success, ASEAN is trying to bring the United States into its own organizational orbit. It is playing its own game—not America’s, not China’s.

In the soft-power scenario, the Obama administration is trying to do things and do them in ways that will please the ASEAN countries, without any specific payoff for American interests beyond garnering goodwill. Influence and popularity, however, are different things. Influence results in getting another party to do something they might not want to do. If the administration cannot identify exactly what it wants in the bargain, it is not exercising influence.

Under either scenario, it is ASEAN that occupies the driver’s seat. In the China-balancing scenario, ASEAN members receive the benefits of U.S. engagement, arms sales, joint exercises, etc., and turn them to their own strategic purposes. This is what the oft-repeated Southeast Asian protest of not wanting to “choose” sides is all about. Of course, ASEAN members do not want to provoke the ire of the Chinese when they have the option of benefiting, undisturbed, from both sides.

In the Philippines, the United States is making an “ask” on defense cooperation that stretches Manila enough that there is serious negotiation. This applies to some extent to Singapore as well, which stepped in to provide access for the U.S. Navy in the 1990s and is doing so again. It is time for Washington to make “asks” of its other friends, partners and allies in the region as well. The more comfortable ASEAN is with the United States, the more it is meeting its own strategic objective of engaging all comers and making the most of their contributions. If the United States pushes for deeper defense cooperation, ASEAN will be less comfortable. In short, while ASEAN may have an interest in not choosing, American interests require that sometimes it must ask it to.
ASEAN is at a delicate moment in its history. It is proving utterly incapable of handling the challenge China presents in the South China Sea. Twenty years of engagement with China on the issue have failed. It is at moments like these, when its members’ interest diverge, that it is most open to influence. This is exactly why the countries with the greatest stake in ASEAN—Indonesia, for example—are keen to paper over intra-ASEAN disputes. The Philippines’s interest in dealing with China is as close to home as its Western shoreline; Indonesia’s is in preserving amity in the organization that legitimizes its power.

The principal U.S. interest in Southeast Asia today lies in countering, and ultimately moderating, aggressive Chinese claims and behavior that threaten regional peace, security, and prosperity. This cannot be done by allowing American strategic aims to be subsumed by ASEAN’s. To the extent that some ASEAN members share U.S. concerns about China, they temper their concerns with intra-ASEAN priorities that are not American priorities. For this reason, beyond serving as a valuable networking venue, institutions like the ASEAN Defense Ministers Meeting-Plus and the ASEAN Regional Forum will not meet American strategic objectives.

What should Washington be asking for from Southeast Asia?

· Steady and persistent pressure on China’s maritime adventurism and extra-legal claims to “blue soil.” Predisposed to soft-pedal disputes with China as it is, the administration’s energy with which it is prepared to assert U.S. concerns ebbs and flows with prevailing opinion in ASEAN diplomatic circles. The high point of the administration’s policy was Secretary Clinton’s statements in Hanoi in July 2010. The United States has been overly sensitive to ASEAN’s comfort level ever since.

· Unequivocal public support of the Philippines’ legal challenge to China’s nine-dash map encompassing the vast majority of the South China Sea. For 20 years, ASEAN has championed international law as the basis for managing and ultimately settling the disputes in the South China Sea. Despite this track record, when push came to shove and the Philippines took its case against the Chinese to an arbitral panel under the UN Convention on the Law of the Sea, ASEAN and its member countries went silent. China and the Philippines are both parties to UNCLOS. That being the case, and given ASEAN’s strong support for UNCLOS and its rhetorical commitment to international law, the parties to the conflict ought to utilize it.

· A revision of their positions on customary international maritime law. Washington has differences with several of the countries in Southeast Asia over where and what kind of military activities can be carried out in international waters, including Exclusive Economic Zones (EEZ). These countries’ rhetorical support of a U.S. Navy presence does not currently extend to endorsing naval surveillance and other activities necessary to carrying out its mission. This ought to be an active area of negotiation among the United States and its allies, partners, and friends.
Finally, the administration should make all the photo ops, press conferences and joint statements that occasion cabinet-level visits to Asian capitals count for more. If there is, in fact, shared concern over China’s adventurism and excessive claims, that concern should be made explicit. A code of conduct for the South China Sea is a laudable goal; the United States is right to support it. It should be kept in mind, however, that it is one that China has also endorsed, yet appears to be in no hurry to reach. Support for a code of conduct is not enough.

The administration’s activity in Southeast Asia is, in general, a welcome development. President Obama’s cabinet, especially the Secretaries of Defense and State, should be amply represented in the region’s diplomatic architecture. But the activity should display a clearer focus on U.S. strategic objectives. Otherwise, it is merely fulfilling someone else’s strategic vision.