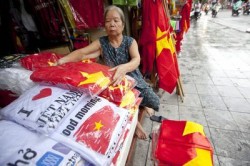 Recent political, social and economic circumstances in Vietnam have inspired a renewed interest in the development of civil society

A political vibrancy has developed that is potentially capable of navigating the repressive structural constraints and hegemonic power of the party-state.

After Doi Moi in the early 1990s, many of Vietnam’s political commentators were writing with euphoria about the prospect of a nascent civil society. They were surprised by the proliferation of non-governmental organisations and associations, the increasing freedom of the press and media due to the declining salience of state ideology, and the loosening of the state’s political control over society. The arrival of an international donors’ community with a neoliberal economic agenda to buttress the fledgling ‘civil society’ encouraged optimism about the prospect of substantive democratisation. Meanwhile, the challenge mounted by political dissidents and a number of pro-democracy activist organisations, both at home and in exile, assisted to further diversify the dimensions of civil society.

However, the hope of meaningful civil society development and democratisation was initially dismissed as liberal idealism. The elitism of — and structural ties between — civil society associations/NGOs and the party-state have contributed to the resilience of the party-state by generating a façade of state legitimacy. Additionally, liberal pro-democracy activists underestimated the repressive reaction of the party-state, both violent and non-violent, when dealing with direct political opposition. Most political opposition groups were heavily crushed and dissidents were given severe sentences.

Changing dynamics in the economy and politics in recent years have further highlighted the need for civil society development. Vietnam is now considered a middle-income country, resulting in international donors withdrawing aid from a number of development areas, and a decrease in official development assistance grants. As such, the country has entered the longest period of economic slowdown since Doi Moi. Economic mismanagement, rampant corruption, the rise of a rent-seeking state, and the poor quality of various basic welfare services provided by the state have stimulated further  social dissatisfaction and criticisms over the effectiveness of the state’s governance.

‘Petition 72’ initiated in February this year by a ‘loyal opposition’ group gained wide support, and represents a liberal response to the efforts by the party-state to amend the current Soviet-style 1992 Constitution. The level of tolerance exercised by the party-state over Petition 72, and subsequent similar criticism from various groups over the draft constitutional amendments on the grounds of its limitations over civil and political rights, is particularly phenomenal. The preparation and submission of a ‘shadow report’ in June 2013 by more than 60 local NGOs under the UN Human Rights Council’s Universal Periodic Review, as a mechanism to assess the Vietnamese state’s implementation of obligations on human rights, is the first of its kind in Vietnam’s history.

Meanwhile, on 16 August 2013, the appeal court in Long An province halved the sentences of two high-profile political activists that had been convicted with the crime of ‘conducting propaganda against the state’, resulting in one being released on probation and the other having their sentence reduced to four years’ imprisonment. This is the first case in which sentences have been reduced so significantly for such political acts, and many observers were very surprised by the decision. Earlier in the year, too, fish farmers who had resorted to violence against the state’s law enforcement squad during an illegal land eviction in Hai Phong province also received more lenient sentences from the appeal court.

From a liberal perspective, the fundamental preconditions for a new phase of civil society development have long been in place, and can now take on more substantive qualities. The expansion of the middle class after some decades of capitalist development, and the rising power of social media and individual blogging, have given those with liberal ideals new confidence in civil society. Furthermore, Vietnam’s China policy has become a critical question for Vietnamese politics. A series of anti-China demonstrations during the summers of 2011 and 2012 signal a new era of protest politics in a country where rules and norms are now being subject to serious contestations. Finally, the issues of human rights and rights-based approaches have gained more importance on the state’s agenda, and the practices of many local NGOs have moved beyond their typically donor-driven scope.

There is little conclusive evidence yet to confirm any normative ideals of Vietnam’s civil society. But it is clear that many phenomenal changes have moved civil-society development from the background to the forefront of the political scene, suggesting something has vitally changed. In coping with the new realities indicated by the practices and attitudes of both the party-state and civil society, those of the liberal persuasion may find it difficult to grasp a more nuanced account of the subtle changes taking place.Thiem Bui is a PhD scholar at the University of Queensland.