Military roots of racism in Myanmar 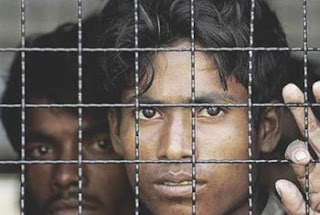 Over the past year, Myanmar has been plagued by neo-Nazi "Buddhist" racism and organized mob violence targeting the country's minority Muslims of diverse ethnic and historical backgrounds

At the very heart of Myanmar's Islamophobic campaign lies the state and its successive senior leaderships, which continue to operate within a concrete set of political economic relations wherein they pursue their typically sinister Machiavellian politics in defense of corporate, clique and personal agendas.

Many country experts, watchers and journalists, as well as think tanks and international students of Buddhism, have offered various explanations for the violence. For some, the blame lies in new freedoms that the quasi-civilian government of President Thein Sein has bestowed on the country. Others have focused on the sectarian dimensions of the conflict.

Some have identified uneven development and attendant communal disparities in wealth and income as the root cause. Of late, Buddhist textual analysts and culturalists have added another layer to the discussion of Myanmar's Islamophobia: canonical explanations looking at historical "Buddhist warfare" and textual justifications (or lack thereof) for the mass violence.

To be sure, all of the above have enriched international understanding of the sudden and deeply troubling eruptions of mass violence against Myanmar's Muslims. However, they all fail to see the elephant in the room, namely the military-controlled state which has long institutionalized racism as its guiding philosophy.

In contrast to global punditry on "Buddhist" terror, as Time magazine's cover story on the subject put it without problematizing the term "Buddhist" or putting it in quotation marks, even the relatively more astute Burmese on the street, better informed and more analytical than average, have guessed right the main culprit.

That is, the various cliques of generals and ex-generals, and their instruments of power - the state and its security and propaganda apparatuses - have been directly and indirectly involved first in the "othering" of Muslim communities and then in the actual mob attacks against them, including the slaughter, destruction, looting and burning of Muslim communities and their sacred mosques.

In one well-documented incident, security forces in the central town of Meikhtila and "Buddhist" mobs negotiated amicably the amount of time that would be allowed to the mobs - 30 minutes, they agreed - to complete their destruction of the town's 200-year-old mosque. A YouTube video file shows a group of state security officials chit-chatting over cigarettes with some of the anti-Muslim participants in the mosque's destruction while the senseless act was in progress.

According to Burmese sources from Meikhtila and Mandalay whom this author interviewed during a recent visit to Kuala Lumpur, authorities in both Mandalay, the regional administrative capital with jurisdiction over Meikhtila, and the national capital of Naypyidaw chose not to rescue a group of 20-plus madrassa students who were eventually slaughtered in broad daylight. Both regional and national authorities were informed by panic-stricken Muslim leaders hours before about the whereabouts of the students, who at the time were hiding from a weapon-wielding "Buddhist" mob.

Empirically, the state and its military leaderships are at the very least guilty of negligence. But local and global pundits commenting on the unfolding racist "Buddhist" campaign against Myanmar's Muslims have often mischaracterized the violence and racism against Muslims as simply "sectarian". The portrayal reflects a tendency to overemphasize society's role and to seek essentially cultural explanations for "Buddhist" mass violence and racism.

To be sure, there are deep-seated prejudices among Myanmar's different communities. Yes, ethno-economic nationalism has long been a pillar of Burmese nationalism throughout both historical and post-independence eras. Yes, the primitive but popular understanding of "race" and "ethnicity" as immutable and blood-based - as opposed to fluid, imagined and manufactured - has played a role in the recent revival of nationalist fervor. Yes, Buddhism and violence have always been an empirical paradox and historical oxymoron.

But it is really the state and its leaderships that have modulated, mobilized and facilitated multiethnic and multi-faith communities' prejudices against Myanmar's peoples of Chinese, Indian and mixed ethnic origins, as well as religious minorities.

Over the past 50 years, successive military leaders - from General Ne Win to the recently retired despot Senior General Than Shwe - have not only played the race and faith cards as a matter of political and military strategy, but they have also enshrined "Buddhist" racism as a key foundational pillar of what is known to many as the Golden Land of Buddhists, reference to the country's many gilded temples and gold-colored, harvest-time paddy fields.

Triggered by Thein Sein's official defense of the neo-Nazi "monk" U Wirathu, a recent special report by Reuters traced the origin of the 969 "Buddhist" racist campaign against Myanmar Muslims to the State Law and Order Restoration Council regime, the once ruling military junta presided over by the late Senior General Saw Maung.

Specifically, the Reuters' report singled out the now retired director of religious affairs in the Ministry of Home and Religious Affairs as the individual who incubated and disseminated Islamophobic ideas in society at large with the blessing of Saw Maung. Meanwhile, new Burmese language analyses note the now officially retired Than Shwe, Saw Maung's successor, published an anti-Muslim and anti-Rohingya tract entitled "Myanmar's Broken Western Gate", a reference to the Rakhine State which borders on predominantly Muslim Bangladesh.

Racism as law
Yet it was the late dictator Ne Win, the founder of Myanmar's modern military rule, and his Western-educated advisers, including the British and Dutch-trained lawyer and president Dr Maung Maung and the Australian-trained Rakhine historian Dr Aye Kyaw, who developed the current strain of "Buddhist" ethno-nationalism. It was informed largely by their own personal xenophobia towards Muslims, Christians, and Burmese of Indian sub-continent and mainland China origins, groups they referred to as "mixed-blood persons" or "impure breeds''.

In his landmark October 8, 1982, speech to a group of his senior deputies and advisers tasked with drafting what later became known as the 1982 Citizenship Act, Ne Win spelled out his official justifications for enshrining racism in law and pursuing it as a matter of "national security''. His speech sheds light on the deeply racist nature of the Act, which in the wake of the pogroms against Rohingya Muslims last year has become a focus of international concern and controversy.

As Ne Win made clear in 1982, "tayoke" (Chinese) and "kalars" (the local racist term for dark-skinned people of Indian origin or Muslims) cannot be entrusted with any important position in Myanmar's officialdom, including the bureaucracy and armed forces. As Ne Win unequivocally put it, all immigrants with foreign roots, referred to by him as "guests" and "mixed bloods", were in Myanmar due to the legacy of British colonial rule.

In the case of those who came after the first Anglo-Burmese war of 1824, in which the Burmese were defeated and had to concede to the British the coastal regions of Tenessarim and Arakhine provinces, themselves Burmese colonies snatched through victorious military conquests over rival Siamese and Arakanese kingdoms, having settled in the country for over a century was not sufficient ground to be granted full-citizenship rights.

As for those who came later but were already resident in the country before World War II, decades of permanent residency was more cause for suspicion than grounds for receiving full-citizenship, according to Ne Win's speech. "Their penchant for making money by all means and knowing this how could we trust them in our organizations that decide the destiny of our country?" the former dictator rhetorically asked.

"We will therefore not give them full citizenship and full rights. Nevertheless, we will extend them rights to a certain extent. We will give them the right to earn according to their work and live a decent life. No more." In an Orwellian gloss, Ne Win exhorted his deputies to "have sympathy on those who had been here for such a long time and give them peace of mind''.

From that fateful day in 1982, successive military government leaderships have as a matter of policy purged their power base - the 400,000-strong armed forces - of officers of Chinese and Indian ancestry, notwithstanding a few exceptions.

Since Ne Win rose to power in a 1962 coup, the military-controlled state has pursued wave after wave of racist national initiatives for religious and cultural affairs, educational matters, and professional advancement, among other areas.

Yet one contradiction in Ne Win's policies favoring "pure bloods" and "true children of the land" is that Ne Win himself could be characterized as "non-pure" ethnic Bama, as were many of his racist deputies and ideological heirs. Many were and still are of tayoke origins. For instance, the current union minister and top government "peace negotiator" Aung Min is of ethnic Chinese descent.

The unfolding process of Myanmar's nightmarish slide towards "ethnic and religious purity" stands in sharp contrast with the multiculturalist perspective of martyred independence hero Aung San, the father of current opposition leader Aung San Suu Kyi, and his multiethnic and inter-faith comrades.

On the eve of the country's independence from Britain in 1947, Aung San prophetically warned against mixing Buddhism, race/ethnicity and politics in the then soon-to-be independent Burma, as the country was then known. In opposing the idea of making Buddhism the official state religion of the country, Aung San articulated a secularist, multiculturalist vision for the country's future: Courtesy Joyo News