The unfairness in Land Ownership between Indonesia and Australia 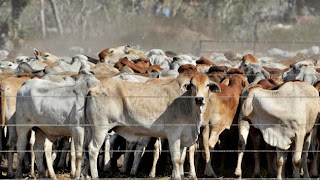 Aburizal Bakrie, have owned leases over big pastoral stations (ranches). Discrimination against Indonesia is unlikely, even though the reverse operates.

On this side of the Arafura Sea there’s no way Australians can buy even a grain of the archipelago. Apart from leasing a condo, the best we can do is enjoy property held in the name of an Indonesian spouse or business partner. The risks are obvious.
“Nationalism is an infantile thing – it’s the measles of mankind”. If Nobel Prize winner Albert Einstein’s quip is right, then it’s time to extend vaccination programs in Indonesia and Australia before the epidemic hits, for there are troubling signs that rational thought is being infected by the virus of base political rhetoric.

Consider the comments of new Australia Agriculture Minister Barnaby Joyce. The Queensland politician feels uncomfortable with Indonesians buying 10,000 square kilometers of Northern Australia (an area twice the size of Lombok), to raise cattle for consumption in the Republic.

Like all populists, the minister knows that his views play well with the xenophobic. These suspicious folk were revealed in August through an Australian government-commissioned survey. This showed almost half the respondents believe Indonesia is a threat.

Joyce doesn’t disparage directly, preferring the fuzzy phrase “national interest”. But the message is clear: Who’d want sinister foreigners with their funny habits, strange language and curious religion sitting on our land? Goodness, they might even make it more productive.

Nonetheless, Joyce’s mutterings have copped some stick, as Australians say. A maturing electorate? Maybe – or because his boss, Prime Minister Tony Abbott is trying to be nice to the people next door and show his Asian credentials.

Despite Joyce’s concerns, a sale will probably go through after scrutiny by the Foreign Investment Review Board. The Chinese, British, Americans and many other nationals, including presidential hopeful Aburizal Bakrie, have owned leases over big pastoral stations (ranches). Discrimination against Indonesia is unlikely, even though the reverse operates.

On this side of the Arafura Sea there’s no way Australians can buy even a grain of the archipelago. Apart from leasing a condo, the best we can do is enjoy property held in the name of an Indonesian spouse or business partner. The risks are obvious.
Joyce is a member of the conservative National Party (in coalition with the Liberal Party majority), but even some supporters, particularly those with properties for sale, reckon he’s singing yesteryear’s song. Not so in Indonesia. What Perth academic Professor Krishna Sen calls “nationalistic fervor” remains top of the pops.

Writing on The Conversation website she made the embarrassing (for Australians) observation that the present Indonesian Cabinet is smart, well-educated and understands more about Australia than its counterpart does of Indonesia. Three key members of the Indonesian government, including Vice President Boediono, studied at Australian universities, six have PhDs.

So all the more surprise that such a sophisticated ministry seems determined to bang the nationalistic drum with its policies, knowing that the risks of rousing the masses are real and damaging.

According to the London-based economic think-tank Global Trade Alert, Indonesia has implemented 198 protectionist measures that “are harmful or almost certainly harmful to Indonesia”. Another 88 are in the queue.

Further proof that foreigners aren’t wanted came with the release this September of figures showing a 6 percent drop in work permits. For Australians the figure is even greater — about a third, down to just over 2,300 in the past year.

Employers here and elsewhere usually want the best person for the job. Are qualifications and experience of less value than birthplace? Does citizenship trump merit? In the current climate, the answers are “yes”.

Writing in The Wall Street Journal, Jakarta-based management consultants John Kurtz and James Van Zorge commented on “the curse of nationalism”, adding: “Policy changes in the mining, retail, horticultural and oil and gas sectors have led foreign investors to reassess the risk of doing business here”.

Foreign companies take profits out of the country so are easy to demonize: “You are poor because they are greedy”. Investors also take risks and create jobs. That’s usually overlooked.

Elections are great opportunities for politicians to offer slogans rather than plans. Abbott’s one-liner “stop the boats” resonated with an electorate deeply worried about Middle Eastern and Sri Lankan asylum seekers being ferried to Australian shores by Indonesian fishermen.

How that’s going to be achieved is another matter. The plans revealed so far, including Indonesian “transit ports” for refugees, seem set to inflame emotions.

National flags are useful symbols but can also mask purpose. All the indicators are that next year’s presidential election will be a policy-free affair driven by personalities draping themselves in red and white. The dog whistling has already started. Terms like “territorial integrity” and “sovereign rights” stir the blood but dull the brain.

In 2010, President Susilo Bambang Yudhoyono addressed the Australian Parliament. He said the first challenge facing the two nations was to “bring a change in each other’s mindset”.

He continued: ‘The most persistent problem is the presence of age-old stereotypes — misleading, simplistic mental caricatures that depict the other side in a bad light.’

It will be sad and damaging if next year’s candidates follow Joyce’s misleading and simplistic view that the nation will be better off without outsiders, their money, expertise — and friendship.

Duncan Graham  is a journalist who lives in Malang, East Java.