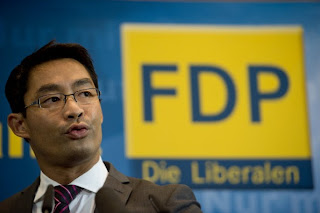 THE story of Philipp Rösler in German politics should be an inspiring one. At the age of roughly 40 years, he is the vice chancellor of Germany, as well as its economics minister and the leader of the Free Democrats (FDP), the junior party in the current governing coalition. I say "roughly 40" because his precise birthday is not known. He was born in a Christian orphanage in Vietnam, whence he was adopted to Germany by two loving parents. Philipp was especially close to his father, Uwe Rösler, a Social Democrat by persuasion and a former officer in the German army.
Philipp Rösler says he grew up feeling 100% German. At about 19, he joined the FDP, a party with liberal values of the sort The Economist supports. Yes, at its best the FDP stands for tolerance and freedom, not only economic but also social and otherwise. (At its worst, it panders to its clientele, but it is hardly alone in that game.) Mr Rösler studied medicine, for a time also practised in his father's army, then rose through the ranks of the FDP. He needs work as a public speaker—I find that he swallows his words too much—but he is intelligent and good-looking.

But there is the matter of his Asian face. For the overwhelming majority of Germans that is either uninteresting or a plus, because they are proud that Germany is nowadays an immigrant-friendly country where every opportunity is open to all ethnicities. But for a regrettable minority, the Asian face seems to be a topic of conversation. And so Mr Rösler gets asked about it at every opportunity. If I were him, I would also be sick of it.

The way he deals with it is not to go into it. And he is right. In politics, you can only lose if others get the impression that you want their pity. And it should be up to him whether he makes race or racism "his issue". He prefers to talk about the economy, taxes, trade, energy, as he should. He also wants to speak as a German, which he is. A darned proud one, it should be added (as perhaps only an immigrant in Germany can be). He has called Germany the "freest country in the world" as well as the "coolest". When he visited Vietnam in 2006, he made clear that he went there as the German economics minister, not as a Vietnamese man looking for his roots.

And yet there are always those few idiots out there. One was overheard at an FDP kiosk explaining that he would vote FDP if only it didn't have that Jap (or Chink, or whatever) at the top. Apparently, Mr Rösler receives some letters that are unprintable.

The Asian face also comes up in the subtler political world of innuendo and metaphor. Two years ago, when he became the FDP's boss, Mr Rösler compared himself to bamboo, which is strong but flexible, bending in the wind but not breaking. That works for me. Maybe it was also his one and only attempt to see whether an exotic brand could work for him politically.

Sure enough, his party frenemy Rainer Brüderle, now the FDP's top candidate in the coming election, gave a counter speech in which he, Mr Brüderle, was not as strong as bamboo but rather as strong... as an oak. The oak is a German tree, you see. Thank you for reminding us,
Mr Brüderle. Mr Brüderle really is strong (and had to be to weather the Twitter storm after that allegation of sexism earlier this year.) But he's a pro in politics. Was the tree talk necessary?
Yet the most unfortunate twist in Mr Rösler's ongoing ordeal has been happening over the past two days. A cheeky and often enjoyable German newspaper known as the taz interviewed Mr Rösler. Sure enough, the taz decided to get obsessive about the Asian face that Mr Rösler does not want to make such an issue. Again and again, it asked him to comment on the "hatred" he must be experiencing all the time. And he said... something.

We don't know what, because he refused to sign off on the interview afterward. (This is a problematic tradition in German media, which I abhor and resist: journalists are supposed to go back to their interviewees for quote approval.) So the taz published the interview with only the questions and the answers omitted. And now everybody is talking about, you guessed it, Mr Rösler and his Asian face.