More US boots on Philippine soil 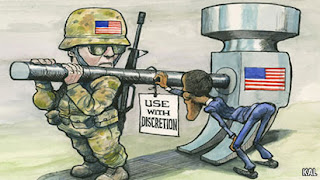 MANILA - The Philippines has provisionally agreed to allow for a stronger US military presence on its soil, as tensions mount with China over contested territories in the South China Sea. The proposed agreement provides a framework for the semi-permanent "rotational" stationing of American troops and military hardware in the Philippines and once implemented will provide new strategic ballast to the US's efforts to counterbalance China's influence in the region.

Since July, Manila and Washington engaged in a series of intensive negotiations over a new strategic arrangement between the two treaty allies. Another round of talks is scheduled for mid-September in Washington, at which negotiators will aim to iron out final details.

Since the closure of US military bases here in 1992, the two countries have been bound by the 1999 Visiting Forces Agreement (VFA), which allows for the stationing on a rotational basis of a limited number of US troops in the Philippines.

Under the VFA, US troops have provided logistical, intelligence and alleged operational support to the Armed Forces of the Philippines' ongoing campaign in the country's southernmost regions against Islamic rebels, including the al Qaeda-affiliated Abu Sayyaf Group. In light of the Philippines' struggle to build a minimum deterrence capability against external threats, including China, the US agreement will potentially allow Filipino troops to use American hardware currently stationed at Philippine bases.

The agreement could mark a game-changer in the ongoing regional competition over disputed features in the South China Sea by boosting the Philippines' ability to more decisively defend its claims and hedge against further Chinese territorial assertiveness. The Philippines and US hold annual joint military exercises, with recent maneuvers taking place near contested areas in the South China Sea. The proposed agreement will likely send an even stronger message to China about the US's commitment to maintaining stability in the maritime area.

Since 2010, the US has gradually re-aligned its strategic and military commitments to the Western Pacific, primarily to check China's perceived territorial expansionism and to re-assert American hegemony in the Pacific basin. As a direct party to the South China Sea disputes and standing among a select number of US treaty allies in Asia, the Philippines, a former US colony, is from Washington's perspective an ideal candidate for hosting US military assets in the region as part of its "pivot" policy.

The 1951 Mutual Defense Treaty between the Philippines and US is the linchpin of their bilateral defense alliance, with Article V unequivocally stating, "an armed attack on either of the Parties is deemed to include an armed attack on the metropolitan territory of either of the Parties, or on the island territories under its jurisdiction in the Pacific Ocean, its armed forces, public vessels or aircraft in the Pacific".

While the mutual defense pact was largely a product of Cold War calculations, the spirit and principles of the treaty have been largely re-affirmed by both sides, with the 2011 Manila Declaration cementing its role as the foundation of bilateral relations. On at least four occasions, the US has communicated in varying degrees its willingness to come to the Philippines' aid in an event of a confrontation in the South China Sea, using couched in Washington's commitment to maintain "freedom of navigation" in the area.

During the Jimmy Carter administration, then US secretary of state Cyrus Vance clarified that the treaty covered both "an attack against the metropolitan territory of the Philippines as well as an attack on Philippine forces in the Pacific Area".

Even in the post-Cold War period, when US bases in the Philippines were closed amid the disappearance of the Soviet Union's naval threat, the Bill Clinton administration asserted "the South China Sea to be part of the Pacific Area". At the time, Manila read the statement to mean that an attack on Philippine troops in the South China Sea would compel an American response.

The post-9/11 global "war on terror" ushered in a new phase in bilateral defense relations. In what was frequently characterized as the campaign's "second front" outside of Iraq and Afghanistan, members of the US's Special Operations Command Pacific (SOCPAC) were deployed to the Philippines to support anti-terror related operations, including military operations aimed at flushing out the Abu Sayyaf.

The move was described by The New York Times as the "the largest single deployment of American military might outside Afghanistan to fight terrorists since the Sept. 11 attack".

Despite Washington's increased military support to the Philippines, the latter was largely treated by the George W Bush administration as an instrument for the broader strategy of containing Islamic extremists. Under Bush, there was no significant US aid or investment in improving the Philippines minimum deterrence capabilities against external threats. Rather, US-backed counter-terrorism operations merely reinforced the Philippines domestic-oriented security doctrine, which was primarily focused on confronting local insurgent groups on the southern island of Mindanao and Communist-related groups spread throughout the country.

Under incumbent president Barack Obama, the 2008 Great Recession exposed the US's weak economic foundations and emboldened China to step up its territorial maneuverings in the Western Pacific amid questions about the US's financial ability to maintain its traditional security role in the region.

Confronting a significantly more powerful and suddenly more assertive China, the Philippines was in significant need of US aid. This was the reason behind Manila's enthusiastic endorsement of the US's "pivot" to the Pacific, while many in the region, including China, expressed reservations about a larger American military footprint in East Asia.

Despite Obama's forceful rhetoric, culminating in his 2011 speech in the Australian Parliament announcing the stationing of troops at Darwin, of re-asserting Washington's role as an "anchor of stability and prosperity" in the Pacific, Manila has lamented the lack of concrete measures and financial commitments to back the rhetoric.

The war-weary Obama administration has equivocated on its commitment to come to Manila's rescue in an event of military confrontation outside of the Philippines' metropolitan territories, including in the contested waters of the South China Sea.

Obama's own efforts to enhance strategic bilateral relations with China also added to Philippine worries over the US's broad defense commitment. The Philippines' post-Cold War constitutional restriction on the establishment of permanent foreign bases on local soil also served as an obstacle to a full-fledged re-alignment of US forces to the region, with the likes of Singapore and Australia taking the initiative to welcome a stronger US military presence ahead of treaty allies such as the Philippines.

When China and the Philippines entered a dangerous standoff at sea over the Scarborough Shoal in mid-2012, the US encouraged the Philippines to consider a diplomatic compromise. In absence of a clear US commitment to the Philippines' defense, China was able to easily outmaneuver the Philippines and has since used a temporary disengagement agreement to consolidate its hold over the contested South China Sea feature. Since then the Philippines has sought a firmer US military commitment and made overtures to Japan in a bid to counter China's perceived threat.

In recent months, however, there has been a palpable change in the US's tone towards China, with top US officials more openly accusing China of territorial expansionism. This was most evident in the US's response to China's recent push into Philippine-controlled features such as the Second Thomas Shoal, which saw Washington explicitly criticize any unilateral seizure of contested territories in the South China Sea.

In light of China's push to consolidate its wide-reaching territorial claims, including its new "10-dash line" map, which broadens its "nine-dash line" map claims to encompass much of the South China Sea as well as Taiwan, the Obama administration seems increasingly concerned about its credibility and fragile strategic status in the region. This vulnerability, some analysts suggest, served as pretext for the US's more vigorous push for a bolstered military presence in the Philippines.

After an initial round of bilateral negotiations in July over a new basing agreement, US secretary of defense Chuck Hagel made a high-profile visit to Manila, where he met Philippine President Benigno Aquino as well as Philippine Defense Secretary Voltaire Gazmin. "The United States does not seek permanent bases in the Philippines-that would represent a return to an outdated Cold War mentality," Hagel said after meeting Aquino. "We are using a new model of military-to-military cooperation befitting two great allies and friends".

In exchange for allowing a greater US military presence in the Philippines, Hagel said Washington would help in "building a modern military" as well as sharing "what we've [US] learned with our Filipino allies". When pressed on how China would likely respond to the proposed agreement, Hagel stated that the region could not meet its economic potential "without stability, without security" - a thinly veiled jab at China's supposed contribution to regional insecurity.

Shortly before Hagel's visit, the two country's military chiefs, General Emmanuel Bautista and General Martin Dempsey, signed a joint statement in Washington affirming both sides' commitment to the 1951 Mutual Defense Treaty. Hagel's visit was meant to iron out differences and lay down the ground for upcoming negotiations in Washington to finalize the new "rotational" basing agreement, which could be finalized as early as late-September.

The US has pushed for a 20-year rotational presence agreement, which would most likely raise some legal debates over its constitutionality. Irked by Philippine-US moves to deepen their military alliance, China abruptly rescinded its invitation to Aquino to visit the 10th Association of Southeast Asian Nations-China Economic Expo held in Nanning, raising new concerns over already deteriorating Philippine-China bilateral relations. While the Philippines and US deepen their military ties, it is not initially clear if the move will lead to more calm or discord in the South China Sea.
By Richard Javad Heydarian Manila-based foreign affairs analyst focusing on the South China Sea and international security issues. He is a lecturer at Ateneo De Manila University's Department of Political Science. Bottom of Form