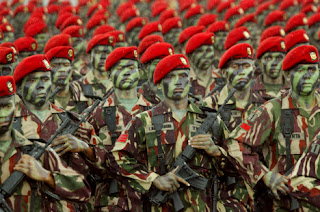 President Susilo Bambang Yudhoyono swore in the new chiefs of the Navy and the Air Force in a ceremony at the State Palace on Monday. Adm. Marsetyo was inaugurated as the new Navy chief of staff, replacing Adm. Soeparno, while Air Chief Marshal Ida Bagus Putu Dunia was inducted as the new Air Force chief of staff, replacing Air Chief Marshal Imam Sufaat.

The partial reshuffle — involving only two of the three forces within the Indonesian Military (TNI) — was, to a certain extent, a common regeneration process within the armed forces as Soeparno and Imam, both aged 57, are approaching the mandatory retirement age of 58 for high-ranking officers. Imam will officially retire next January and Soeparno next September.

Monday’s reshuffle was indeed spectacular in essence as Marsetyo and Putu Dunia, who both belong to the Class of 1981 in their respective Navy and Air Force academies, were deemed the best graduates in their academy batches.

It was also controversial in nature, however, as Gen. Pramono Edhie Wibowo, who is also 57 years of age, was not part of the current regeneration process and has been retained instead — at least until further notice — as the Army chief of staff. Pramono will officially reach the mandatory retirement age in May next year.

Upon observing the partial transfer of duties within the TNI on Monday, it is therefore difficult to deny the speculation that the latest TNI reshuffle was politically motivated and linked to political constellations ahead of the 2014 general election. TNI reshuffles have always been widely anticipated events, especially when the reorganization process comes close to one of the most crucial political events in the republic, namely the five-yearly elections — the legislative elections and the presidential election, scheduled for April and July 2014, respectively.

Further speculation is rife that Pramono, who is also President Yudhoyono’s brother-in-law, could be promoted as the next TNI chief despite his age. According to Article 13, Paragraph 2 of Law No. 34/2004 on the Indonesian Military, a TNI chief is inaugurated and dismissed by the president upon approval of the House of Representatives (DPR). Upon observing the political configuration within the House, with Yudhoyono’s Democratic Party-led coalition controlling 423 seats (75.5 percent), it is thus not impossible for him to have Pramono promoted as TNI chief.

It is true that it will not be easy for Yudhoyono and his Democratic Party to persuade their coalition members to dance to their tune and unanimously endorse Pramono’s promotion, as the coalition itself has been volatile, with members acting against the party’s line on certain issues. But, as there is a popular adage among politicians that there are no permanent friends or foes in politics, only interests, it could be a possibility that the House — particularly members of the Democratic Party-led coalition — would agree on his promotion.

Should Pramono’s term be extended — moreover, if he was then promoted to lead the TNI — President Yudhoyono and perhaps the House would have to face another problem: resistance from the other two forces, particularly the Air Force, as the military’s top post of TNI chief, according to the 2004 law, should rotate between the Army, Navy and Air Force chiefs. The current chief, Adm. Agus Suhartono, who will reach retirement age in August next year, is from the Navy, while his predecessor, the now-retired Gen. Djoko Santoso, was from the Army. The next in line should, therefore, be from the Air Force.

However, the legal constraint could prove to be a blessing in disguise for Pramono, as Paragraph 4 of the 2004 law’s Article 13 stipulates that the military’s top post “can be” (thus, not compulsory) rotated between the Army, Navy and Air Force chiefs.

Moreover, with the retirement of both Imam Sufaat and Soeparno, Pramono will then be the most senior active TNI officer among the three military forces. Pramono will not only be the most senior officer in age, but also in graduation year. He belongs to the 1980 Military Academy graduates, one year earlier than Marsetyo and Putu Dunia.

Apart from seniority issues in the TNI’s leadership, Pramono’s promotion to the TNI’s top post would be a valuable benefit for him as it would raise his profile prior to receiving the “leadership relay baton” in the Democratic Party from his brother-in-law, as Yudhoyono cannot run for a third presidential term. Indeed, Pramono has been widely tipped as Yudhoyono’s successor in the ruling party, whose popularity has declined following a number of its senior officials being convicted for and implicated in a number of corruption cases.

Will this scenario be the eventual path taken by Yudhoyono and Pramono? Only time will tell.