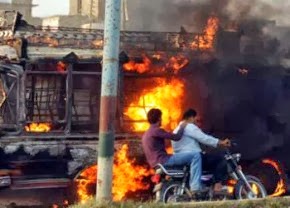 Once known as the City of Lights, Pakistan's commercial capital is in chaos

The spate of violence that has engulfed Karachi, Pakistan's chaotic commercial and economic hub, has come to resemble in many ways the lawlessness of the tribal areas, giving it the dubious distinction of being known as the world's most dangerous megacity.

Armed gangs operate with impunity and without fear of detention, holding hostage the city, teeming with about 18 million people. It is estimated that more than 8,000 people have died in past five years or so as the militant wings of political parties, sectarian outfits and criminal gangs continue to battle for domination.

Thousands of innocent people have died, but even this number does not and can't fully reflect the multidimensional problems Karachi faces. It has political, economic, social, religious, demographic, and external dimensions, which demand a carefully crafted national policy to tackle. The Taliban dimension is a recent addition to the problems. The near collapse of law-enforcement and governance has turned Karachi into a virtually lawless territory with the population living in a perpetual state of fear.

What is most frightening is the prospect of the city becoming the new battleground for the Taliban and other militant groups. The breakdown of law and order and the bloody strife among the alleged armed wings of the ruling coalition partners has given huge space to militants fleeing low-intensity military operations in Swat and South Waziristan.

With the presence of thousands of fugitives, the city has become the country's biggest sanctuary for militants who find little difficulty in blending into large immigrant populations from the northwest. Hundreds of radical madrassahs across the city not only provide them with shelter and logistical support but also a constant supply of recruits. The militants have hugely benefited from the criminalization of politics and ethnic tension.

High-profile terrorist attacks have taken place against military and other security installations, including a 2011 raid on the Mehran Naval Airbase that lasted for 17 hours and resulted in the deaths of 10 security personnel and the loss of two US-manufactured surveillance planes, and the car bombing of a CID detention center the same year that resulted in the deaths of seven security personnel.

Not surprisingly, some security officials compare the Karachi situation with North Waziristan, the tribal agency which is described as the center of gravity for militants and terrorism. It is perhaps for this reason that Major General Rizwan Akhtar, the Director General of the Sindh Pakistan Rangers,said similar things in his report to the Supreme Court of Pakistan, pointing out not only the influx of terrorists from the tribal agencies, but hinting the involvement of ‘foreign elements' behind the whole problem.

Akhtar pointed out that some 19,000 containers of weapons and vehicles had gone missing during the tenure of Rehman Malik, the Interior Minister of the previous PPP government. Establishing a connection between Karachi and tribal areas, the DG reported that weapons that are first taken to tribal areas and from there are again smuggled into Karachi.

Going further into the nature of the problem he pointed out that 78 percent of the illegal weapons being used in Karachi were foreign-manufactured, including AK-47s and 9mm guns, which were being used mainly in committing murders and launching terrorist attacks.

Mafias fight over control of turf or land. In order to wage their fight, they need funds. And, in order to acquire those funds they need to extort. And, in order to extort, they need to control a patch of land. This struggle over land and the growing demand for it coupled with a limited supply has driven violence and violent group formation in Karachi for decades. What is further igniting this conflict is the demographic change which is taking place in Karachi now for many years.

It's common knowledge that Karachi is a migrant's city. What is less commonly appreciated is that the migrants consist in large part of people displaced by conflict. The first to come were refugees, or population fleeing violent persecution and conflict were those who call themselves Mohajirs today. The next wave consisted of those today referred to as the Biharis, who ended up in a patch of land outside Karachi at that time with little more than the shirts on their backs. That patch of land is today called Orangi Town, but at that time it was an informal settlement outside the city limits.

The next big influx of people fleeing violent conflict were the Afghans, in the 1980s, followed by another wave of Pashtun migrants in the latest round of conflict in Afghanistan.

With each wave of migration, a new fault line has been created in the city's ethnic constitution. Then there are the economic migrants, displaced not by conflict but by opportunity. According to some estimates, close to a million people are added to its population each year, making Karachi the fastest-growing city in the world. The massive influx of immigrants from the northwest in recent years has significantly changed the ethnic balance.

The tug of war between the largely Pashtun Awami National Party and the liberal, Urdu-speaking Muttahida Qaumi Movement, or MQM, is a manifestation of the city`s new demographic reality and ensuing political dynamics. It is as much a battle for control the city as for killing political and ethnic identity of the rival political groups, thereby weakening their political support.

The power struggle has taken a violent turn owing to the parties' alleged patronage of criminal elements involved in land grabbing, arms smuggling and extortion. According to some studies, more than 200 well-armed criminal gangs with political patronage are operating in Karachi, adding to its volatility.

This constant influx of migrants has strained the city's capacity to absorb them. On the one hand, the economy has not been able to generate jobs fast enough to put the rapidly growing demographic to work, and on the other hand, the city infrastructure and its institutions for settlement and management of residential areas have not been able to keep pace.

The result has been large unregulated and illegal settlements springing up on the outskirts of the city, eventually being absorbed by the growing metropolis. A large part of the violence plaguing the city today grows out of this very process of absorbing unregulated settlements.

What has made the situation more dangerous is the inability of the government to crack down on the perpetrators, many of whom are said to come from within the ranks of different political parties. The liberal Pakistan People's Party, which was led by Benazir Bhutto until her assassination, and which heads the government in the province that surrounds the city, is also allegedly patronizing some of the criminal gangs to expand its political base in the city itself, deliberately escalating the violence to achieve certain political ends.

Politicization of the law enforcement agencies has further exacerbated the situation. At least 40 percent of the Karachi police force has reportedly been recruited on political grounds rather than on merit. Many are said to have criminal records. Politicization has become more pronounced after the Sindh government repealed Police Order of 2002, giving powers of transfer and appointment of senior officers to the provincial government. Since then it has become much easier for the ruling parties to get police officers of their choice posted in their constituencies to protect their illegal activities.

Fear of repercussions is a strong factor contributing to professional police officers not being proactive in cracking down on politically connected criminals.

They cannot be blamed for maintaining a low profile after what happened to the officers who were involved in 1995 operations against militant groups during Nawaz Sharif's previous reign. Almost all were said to have been assassinated by militant groups of political parties, especially MQM.

Life in Karachi has thus been paralyzed. There are many areas where people cannot go for various reasons. Local newspaper reports say there are eight main flashpoints in Karachi where hundreds of people have died in this year alone over inter-party politics, drug mafias, kidnapping, extortion, activities of the Tahrik-i-Taliban Pakistan, the local Talib known as the TPP.

The spate of violence has thus led to current targeted operations by the police and the Rangers. Although hundreds of arrests have taken place since September 5, no major terrorist leader, kidnapper or extortion group has been taken into custody. Similarly, although operations are taking place, neither the Rangers nor the police have yet been able to penetrate the city's no-go areas and it is very doubtful they would succeed in crushing these virtually lawless areas.

The operations, on the other hand, are more likely to result in prolonged fighting. Karachi's problems are multi-dimensional and a multi-dimensional approach and policy is needed. For implementing such a policy, the state needs to reform, depoliticize the police and give the policemen incentive of security of life to work independently. The Rangers can't stay in Karachi forever, and ultimately it is the local police which must accomplish the task.

Reforming Karachi police, de-weaponization of militant groups and creating career opportunities for the vulnerable youth are extremely essential aspects of the proposed strategy to bring peace back to what was once known as the "city of lights." It is now a city of tragic darkness. Asia Sentinel