Is the Indonesian economy in trouble? 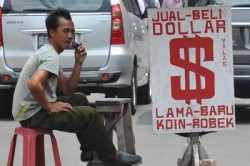 Suddenly there are signs of pressure in the Indonesia economy. Until recently, the economy seemed to be doing well. But growth is now slowing, inflation is rising, the balance of payments is under pressure, and the value of the rupiah has slumped. Why the change in economic fortunes?

The longer-term factors include a range of issues which have been a source of comment within Indonesia for some time. At the broadest level, something of an inward-looking mood appears to have been influencing policies during the past year or so. Senior policy makers have emphasised that the broad approach being promoted, which is one of looking for ways to strengthen Indonesian industries, is not protectionist. Policies of this kind, policy makers argue, will strengthen the resilience of the Indonesian economy by providing greater economic security which will shield both Indonesian producers and consumers from the vagaries of uncertain international conditions.

There is much to be said for the long-term aim of building up domestic Indonesian industries and emphasising key goals such as food and energy security. But a number of well-publicised policies during the past few years have been somewhat interventionist, and have arguably had an anti-market flavour about them.

Policies in the mining sector, for example, have not been especially successful in promoting growth. Output has been falling steadily for over a decade in the oil sector, a previous source of strong exports and government revenues during the 1980s and 1990s. Indonesia, formerly a significant oil-exporting nation, has now become an oil importer and the rising levels of oil imports have become a significant strain on the balance of payments.

In the non-oil mining sectors, investors view some key policy approaches as being excessively interventionist. Mining firms in various industries have been told to install smelters and to process their resources before export. Government directives to this effect are expected to be implemented regardless of whether additional processing in Indonesia is profitable or not.

These directives, along with a range of other structural policies in other sectors, appear to have had the unintended effect of holding back the expansion of exports while adding to the national import bill.

In good times, when the international economy is strong and when international financiers are keen to invest in emerging market economies, developing countries such as Indonesia perhaps have room to take risks with experimental structural policies. But when international conditions are more difficult, markets and investors are less tolerant.

The short-term problem for Indonesia now is that markets have suddenly turned less tolerant, due to three recent developments. First, the slowdown of economic growth in China has led to a fall in demand for Indonesia’s exports. Second, US Fed chairman Ben Bernanke’s indications that the remarkable period of loose monetary policy in the US might be drawing to an end has led to something of a global flight of capital from emerging markets. And third, India’s current economic woes have led to concerns that these problems might spread to other countries across the region through a process of contagion, as was the case in the Asian Financial Crisis of 1997–98.

But it is too early to see the current developments in Indonesian markets as a threat to longer-term growth. For one, policy makers have responded swiftly. On 23 August, Indonesia announced a package of comprehensive fiscal and monetary policies as a response to the pressures in the financial and trade markets. And, to strengthen the package, just a few days ago (29 August) the central bank Bank Indonesia increased interest rates to 7 per cent.

For another, Indonesia has a very strong team of economic policy makers. Vice President Boediono has many years of experience in both monetary and fiscal policy matters, including during the Asian Financial Crisis. He is supported by the Minister of Finance, Dr Chatib Basri, and the Governor of Bank Indonesia, Agus Martowardojo, both of whom are known for their firm commitment to sound economic policies.

Finally, some of the short-term pressures that Indonesia is facing may even prove to be a blessing in disguise. The recent period of strong growth during the past few years may have lulled some policy makers in Indonesia into believing that economic success is guaranteed. If so, an economic rap over the knuckles to remind them that international markets are both fickle and powerful may be no bad thing.