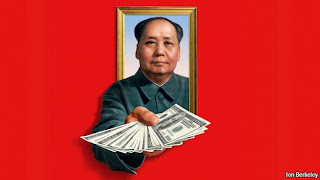 The party is over for Chinese banks, who have for the last few years enjoyed record profits. Since the end of 2008, the Chinese leadership’s desperate bid to keep the wheels of growth turning has let a flood of credit into the banking system and led to an unprecedented US$6.2 trillion of bank loans to state-owned companies and local governments.

Many of these loans bypassed the banks’ books entirely, going through the so-called ‘shadow banking’ market made up of everything from giant financial trusts to mum and dad mini-banks. After a while, even the state banks joined the game. While the regulators turned a blind eye, the four state banks and the smaller city banks took customer deposits, wrapped them into neat little financial tools called  ‘wealth management products’, and sold them on to eager buyers. These included wealthy people chasing yield, real estate developers signing property deals, and even importers short of ready credit.

This explosion into new markets was a change for the state banks. Up until 2010 they had ‘toed the line’, making loans to safe borrowers such as state firms, and following strict rules on interest rates. But a tug of war was going on in the upper levels between more conservative elements such as the People’s Bank of China (PBOC), which was worried about risky loans, and the more aggressive politicians in the State Council, who feared an economic slowdown. In the end — at least until recently — the spenders won out.

Although regulators banned products that allowed banks to move loans off balance sheets, the desire for greater yield on the part of banks and their customers eventually prevailed. Real estate developers previously rejected by banks suddenly discovered they could obtain loans from trusts or, even more riskily, from what the banks like to call ‘entrusted loans’ handed down from one lender to another.

As a result, bank profits boomed. Return on equity (profits based on the equity the banks hold) climbed from less than 5 per cent in 2004 to 21 per cent in the first quarter of 2013.

But in June, even the more aggressive camp got nervous and there was quiet talk about a crackdown on the shadow banking market. That rattled the nerves of the banks and suddenly the interbank lending rate known as the shibor tripled to 13.44 per cent. The PBOC, which traditionally hasn’t paid much attention to the interbank market, refrained from immediately jumping in with fresh cash — and the markets panicked. Suddenly it looked like the policy allowing banks to ‘chase yield’ was quickly reverting to ‘toeing the line’.

The banks are now at a crossroads. A crackdown on shadow banking means tightening credit and a slower economy. But beyond this ‘stimulus or no stimulus’ debate, the de facto liberalisation of interest rates has created an uncomfortable atmosphere of competition in the banking system. State banks accustomed to a cosy relationship with depositors and borrowers are now competing with local city banks.

Meanwhile, new rules that would allow local governments to issue municipal bonds will likely cause city governments to withdraw support from the local banks. Why pay the bank a fee for a loan when the city can go to the markets directly? And the fact that Beijing is experimenting with a private-placement bond program for small and medium companies is another sign of progress for the capital markets — to the exclusion of the banks.

Scrambling for deposits, stuck with growing non-performing loans from their aggressive expansion, and declining support from their government backers, the smaller banks are going to be forced to consolidate. This will create cross-provincial relationships new to China’s historically regional banking system. Other changes are likely as banks respond to the unintended consequences of the free credit era. One thing is clear: the days of easy money are over.

Sara Hsu is Assistant Professor of Economics at the State University of New York.
Andrew Collier is the Managing Director of Orient Capital Research and was previously the President of Bank of China International.