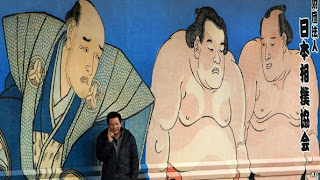 The announcement that Tokyo is to host the 2020 Olympic Games was given much publicity. After all, that sort of thing is what so many people are interested in these days - the grubby glamor of sport and "celebrities". The fact that a footballer or undressed actress gets more cash per week than a cancer surgeon earns in a year attracts hardly a word of media criticism because, after all, celeb worship sells the product.

International comment on the choice of Tokyo has been mildly supportive, just as it was when Japan announced its whopping military budget in August. The country will spend US$49 billion on its armed forces next year, the fifth-largest military budget in the world. Yet as most media yawned gently and carried on highlighting celeb vulgarity, consideration as to what Japan's military intentions might be was missing.

Prime Minister Shinzo Abe has reconstituted an Advisory Panel on Reconstruction of the Legal Basis for Security. That is a fancy title for a group that is going to tell him what he wants to be told about ditching the section of Japan's constitution that prevents it from going to war. (He formed the panel in 2007 during his previous and disastrous year-long tenure as prime minister, and it deservedly lapsed in his all-too-brief absence.)

The Japanese constitution was composed by the US after World War II. Article 9 states:
[T]he Japanese people forever renounce war as a sovereign right of the nation and the threat or use of force as means of settling international disputes. To accomplish the aim of the preceding paragraph, land, sea, and air forces, as well as other war potential, will never be maintained. The right of belligerency of the state will not be recognized.

This was and continues to be regarded as a most satisfactory state of affairs because it means that under present constraints Japan will not again be capable of invading any other country; a nasty habit throughout the first four decades of the 20th century. It was hoped - and still is by very many people - that the Japanese constitution presents, for the moment at least, a decisive counter to any such ambition.

In spite of being specifically forbidden to possess war potential, Japan has a "self-defense force" of considerable strength. Its quarter of a million personnel in the air, ground and sea components operate much the same equipment as do the air forces, armies and navies of other countries. It has tanks and artillery and over 300 fighter aircraft as well as 350 maritime support aircraft, 40 major and well-armed surface combatant ships, and 16 submarines. Not bad for a military organization that is constitutionally forbidden to go to war. But it has no bombers or long-range attack missiles - yet.

In December last year Abe's Liberal Democratic Party came to power. Its lack of liberality was highlighted in April when Abe was asked in parliament if he supported the statement in 1995 by then prime minister Tomiichi Murayama to the effect that Japan apologized for invading all the countries that suffered its savagery in World War II. It was obviously a planted question, and Abe's answer had been prepared in advance.

He replied blandly that "The definition of what constitutes an 'invasion' has yet to be established in academia or in the international community," which assertion is as foolish as it is insulting to the memory of countless millions who suffered the brutality of Japanese invaders for so many years.

Abe continued, "Things that happened between nations will look different depending on which side you view them from." That's true, of course - but there is no doubt that in 1910 Japan invaded Korea, whose citizens were subjected to brutal repression until Japan's defeat in 1945 forced its withdrawal. And there is no question, either, that Japan invaded Manchuria in 1931, and from there prepared its further conquest of China in 1937 which involved, among other appalling atrocities, the Nanking massacre of over 200,000 people.

After attacking Pearl Harbor in 1941 the Japanese invaded Thailand, Malaya, Burma, Borneo, the Philippines, Java, Sumatra, New Guinea, the Solomons and other Pacific Ocean islands. It is intriguing to try to imagine from "which side" Abe imagines these countries might regard Japan's actions, even in forgiving retrospect. But there was another aspect of Japanese imperialism that the prime minister chose to highlight.

In the course of its war preparations in the 1930s, Japan formed Unit 731, a biological and chemical weapons research and development organization whose evil experiments killed thousands (we'll never know the exact number) of Chinese, Koreans and Russians, and who knows how many others.

And it is horribly coincidental, given what has been happening in Syria, that Prime Minister Abe arranged a photo opportunity in May that commemorated Unit 731. In a ghastly display of crass, callous and grinning arrogance, Abe gave the cameras a thumbs-up sign from the cockpit of a Japanese "Self-Defense Force" jet aircraft that prominently displayed the number "731".

This is the man who is currently leading Japan and who wants to have his country released from its constitutional prohibition against creating an offensive military force rather than one that is, quite rightly, focused most effectively on self-defense.

One reason for his determination to destroy the commitment to "forever renounce ... the threat or use of force as means of settling international disputes" is because he wants to confront China militarily over Beijing's claims to islands in the region. If he succeeds in his aim, he will be able to equip his armed forces with advanced offensive weapons and go to war.

Does anyone think this desirable? It seems that he might want to win a different sort of Olympics, but the rest of the world would rather he stuck to sports and domestic governance rather than Abe flexing his military muscles. By Brian Cloughley is a former soldier who writes on military and political affairs, mainly concerning the sub-continent. Courtesy Joyo News Indonesia