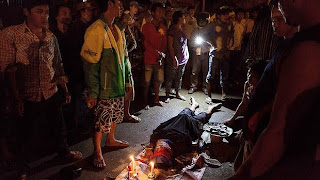 Police fired smoke grenades and water cannons in clashes with hundreds of demonstrators on Phnom Penh's waterfront on Sunday evening, leaving one protester dead and hundreds injured, amid heightened tensions in the Cambodian capital over the country's disputed national elections

Opposition supporters are threatening to continue mass rallies ahead of the first scheduled session of parliament on September 23 which opposition leaders have declared they will boycott.

Our vote is our life ... they stole our votes, it's like stealing our lives.

Sam Rainsy, leader of the opposition Cambodia National Rescue Party (CNRP), told about 20,000 protestors at a Sunday rally that opposition MPs will refuse to attend parliament unless the government of strongman prime minister Hun Sen allows an independent investigation into allegations of widespread vote rigging at the July 28 poll. "Brothers, this is an important mission to rescue the nation," he said.

CNRP deputy president Kem Sokha told the crowd that "our vote is our life...they stole our votes, it's like stealing our lives."

An attempt by King Norodom Sihamoni to broker talks between Mr Hun Sen and Mr Sam Rainsy on Saturday failed to end the six week stand off, one of the biggest political challenges Mr Hun Sen has faced during three decades in power.

Further talks were planned for Monday as human rights activists called for a power sharing deal that could see the opposition being allocated several parliamentary leadership positions.

Deadly protests: The body of a protestor who died after being allegedly shot by riot police on September 15, 2013 in Phnom Penh Photo: Getty Images

Mr Hun Sen's Cambodian People's Party (CPP) took 68 seats at the elections while opposition parties won 55, an increase of 29 seats for the opposition from the previous election.
It was a humiliating result for Mr Hun Sen, 61, who has taken credit for development and economic growth since the Khmer Rouge "killing fields" rule of the 1970s.

The opposition claims it was cheated out of 2.5 million votes to keep Mr Hun Sen in power for another five years and says evidence it has been collecting proves it.

Cambodia's Constitutional Council ruled on Friday that allegations of vote rigging had been investigated and no new investigation was warranted.

Sunday's violence erupted about two kilometres from the city's Freedom Park where Mr Sam Rainsy and other opposition leaders addressed the rally.

Police responded by firing the water cannons on them to launching smoke grenades. Mr Sam Rainsy went to the scene and asked the protestors to end the violence and leave the area.
Several people were injured including a policeman.

Opposition leaders distanced themselves from the violence as protesters vowed to camp out in Freedom Park for another two days despite heavy rain Sunday night. Fears of violence had escalated last Friday when a small bomb and some grenades were discovered in city parks.
Thousands of security forces armed with riot guns, shields and truncheons have been deployed in the city since the election.