Purge and renewal in China: the importance of Bo Xilai’s day in court 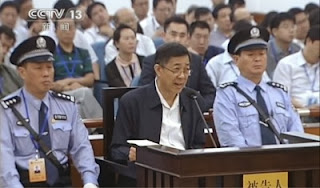 It is ironic that President Xi Jinping has deployed the Maoist model of ‘rectification’ to revitalise and impose his will over the world’s largest and most powerful political party. This is the model of ‘self-purification’ that Mao applied to instil discipline and consolidate personal power from the early 1940s. It requires tight control of an internal security apparatus, to forcefully extract confessions, and it works by rooting out the patronage networks of perceived rivals. More recently Bo used such stratagems to transform the Communist Party in Chongqing city and build a formidable power base, in ways that are not widely understood. Now Xi is applying the same underlying political logic to establish his own authority across the country, with some important innovations. And he is doing it by purging Bo

It is easy to forget, amid the sordid hypocrisy exposed by his fall, that Bo Xilai was a leader who identified a problem and wanted to get things done. Bo was making his run for high office at a time when it was getting harder to restrain the predatory instincts of the bureaucracy and harder still to explain why the Chinese Communist Party, of all political movements, had created one of the least egalitarian societies in Asia. In Bo’s judgment, desperate times demanded desperate measures. He offered himself as the surgeon to remove the Communist Party’s cancerous tumours and fetid organs. ‘Without help, the disease will become fatal’, said Bo in December 2009, borrowing the metaphors of bodily disease that Mao used to commence his own ‘rectification campaign’ in 1942.

Bo mapped the city’s channels of patronage and nodes of political and financial power, planted key people, and uprooted the existing networks of propaganda and coercion which he did not personally control. His key target was the old Chongqing police chief, Wen Qiang, who, like most established police chiefs in China, enjoyed power well beyond his official portfolio. Wen’s patrons included one of Bo’s powerful predecessors, who had been promoted to the Politburo Standing Committee, and his protégés were stacked throughout the municipal political-legal establishment. Wen controlled many of the city’s bath houses, for example, where business was often done. In other words, Chongqing was an ordinary mainland city in which a new leader who lacked deep local patronage ties had little hope of getting anything done — unless he found a way to purge the old regime and make it his own.

Bo’s first major political move was to appoint his own man, Wang Lijun, to act as his scalpel in the rectification operation. He moved Wang to be Wen ‘s deputy police chief, from where he could collect intelligence and map Wen’s patronage ties. In March 2009 Bo shifted Wen Qiang sideways, to be the minister of justice, while promoting Wang Lijun to take his place and arresting Wen’s key police department deputies and protégés. One of them reportedly died of a heart attack in custody. Another reportedly died by smashing his head against a wall. Wen’s sister-in-law was dubbed the ‘Godmother of the Underworld’ and sentenced to 18 years jail. Wen’s wife was shown pictures of her husband with an underage prostitute—and she reportedly led police to the family millions, buried under a gold fish pond.

With potential critics silenced (including the head of Chongqing TV, who was concerned that viewers were boycotting Bo’s ‘red’ programming), the completion of Bo’s ascendancy was announced with a text message, the substance of which appeared on the front page of the next day’s Chongqing Daily: ‘Wen Qiang Is Dead, The People Rejoice, Chongqing is at Peace’.
Bo and his scalpel, Wang Lijun, sliced through the city’s commercial precincts. Police were given quotas of ‘black society’ members to detain in each district, just like the bad class elements in Mao’s day. Alleged gangsters were asked to testify against wealthy entrepreneurs who, in turn, were forced to testify against higher political targets. ‘Basically, the 20 richest guys in Chongqing, he sent them all to jail and confiscated all their assets’, said Wang Boming, publisher of Caijing Magazine, in an interview.

The system of justice, based mostly on lies extracted by torture, proved to be a phenomenally powerful tool of political control. Bo became locally popular for articulating social concerns and cleaning up the streets. Nationally, he became the hero of China’s growing neo-Maoist and New Left movements. Ambitious scholars, entrepreneurs, officials, generals and international statesmen were drawn into his orbit. By the new year of 2012 he seemed to be on the cusp of breaking into the top leadership sanctum.

It could have been Mao at Yan’an, 65 years before.

Mao’s ‘scalpel’ was the internal intelligence chief, Kang Sheng. Kang’s torture-based extraction of false confessions and testimony was instrumental in Mao’s consolidation of power at Yan’an. It also triggered a substantial internal backlash, which forced Mao sideline Kang Sheng before bringing him back to prominence in the 1960s, to resume the work of rooting out the patronage networks of Mao’s perceived and potential rivals. One of Kang’s victims was Xi’s father, a vice premier, in 1962, which led to 16 years in purgatory. Another was Bo’s father, also a vice-premier, during the Cultural Revolution of 1966. Both men were jailed, and tortured, and a member of each family was ‘persecuted to death’.

Bo applied the Maoist strategies of purge and rectification beneath the barest of judicial facades. By then, however, China had changed in ways that meant the old torture-based confession methods didn’t work so well anymore.

Bo’s methods were so brutal, and so out of kilter with the values of China’s increasingly sophisticated and pluralistic society, that they galvanised lawyers, editors, historians and other intellectuals to fight to protect their interests and restrain him. The only weapon they had was to talk truth, in and outside the courtroom, and let events take their course — an approach whose ultimate success relied on China’s information revolution and an increasingly engaged public. Several of them warned of a return to the methods of the Cultural Revolution.

Eventually, the pressure forced open cracks in the political elite. Bo’s court room persecutions of his rivals were so perverse and so public — despite his prodigious propaganda efforts — that enemies sharpened their hatchets and allies found it harder to defend him. Indirectly, as I argue in The Rise and Fall of the House of Bo, this is what brought Bo crashing down.

Bo is likely to be convicted of misdeeds that are marginal to the political reasons that brought his downfall. His downfall followed the interrogation of dozens of associates, with each detainee testifying against the one above.  The national crisis of injustice and inequality that Bo articulated, however, has only become more pressing.

It must bemuse Bo to see Xi using the Maoist language of life-and-death struggle and bodily decay. Public revolt at ‘vile’ cases threatened to ‘doom the party and the state’, said Xi when he took the stage in November last year, six weeks after the Politburo pre-announced Bo’s guilt. ‘There must first be decay for maggots to set in.’

Immediately before Bo’s trial, the Xi administration announced the promotion of a new deputy police chief, Fu Zhenghua, whose crazy-brave assaults on power had previously earned him comparisons with Bo’s old police chief, Wang Lijun. Fu quickly made news with high profile arrests of alleged rumour-mongers on the internet.

Straight after Bo’s trial the South China Morning Post and The New York Times reported previously-suppressed court evidence that linked Bo’s abuse of power to Zhou Yongkang, China’s bulldog-headed former petro-security czar. The news was followed by the detention of the recently-removed chief and remaining top executives at PetroChina, which is arguably the most powerful of all Chinese state-owned companies. Most tantalizing, the SCMP reported a link between Bo’s corruption and the former president who refuses to actually retire, Jiang Zemin.

Xi’s strategy of manipulating the coercive apparatus to purge enemies and use their confessions to taint and intimidate rivals comes directly from Bo’s Chongqing and Mao’s Yan’an. Xi’s propaganda apparatus is brandishing “swords” to enforce discipline across the contested spaces of the internet. His security apparatus has renewed the previous administration’s attack on lawyers and constitutionalism. And Xi’s personal willingness to extend the Bo investigation to the doorstep of some of the most powerful patrons in the country shows that the winner-takes-all logic remains firmly in place.

But the fact that Bo was given probably the most transparent trial in the history of the People’s Republic shows the rules are continuing to evolve.

Bo’s revolutionary prestige, his clan’s ties with other ruling families, and his cult-like status among neo-Maoist sections of the party encouraged (or possibly forced) President Xi to afford him the dignity of contesting the accusations in a relatively open fashion.

The rise of Bo Xilai showed that extreme measures may well be necessary to get anything done in an ageing one-party system. His demise, however, shows that Maoist political methods don’t sit easily with a modern economy, an increasingly fragmented political elite and a society that is empowered by prosperity and informed by new networks of information. Several of Xi’s supporters within the elite say it is too early to rule out the possibility that Xi wants to leave China with something closer to a credible legal system than the one he has inherited. Many say he is blasting a path through webs of patronage and a hopelessly self-interested political-bureaucracy to enable urgent economic reforms.  Whatever Xi’s plans, it is ironic, and potentially dangerous, that he first has to borrow from Bo’s playbook in order to give himself a chance.
John Garnaut is the former China correspondent for Fairfax Media. He is the author of  ‘The Rise and Fall of the House of Bo’.
This article appeared in the most recent edition of the East Asia Forum Quarterly, ‘Leading China where?’.