The Syria Test for Southeast Asia 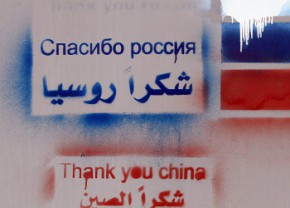 The Asia-Pacific, particularly Southeast Asia, might not care about the Syrian civil war, but they should

Although the Syrian civil war is far removed from the minds of many citizens in Asia-Pacific, state leaders and their citizens would do well to pay closer attention. While much is made about Russia's involvement and support of Syrian president and dictator Bashar al-Assad, little is said about China's diplomatic support and obstruction of UN efforts.

The Asia-Pacific may not have any interest in Syria, but it certainly has interest in China, particularly with regards to ongoing territorial disputes. China's conduct and decisions abroad are rooted in and influenced by its ambitions at home.

Despite not having any strategic ties with the al-Assad regime, unlike Russia, China has refused to support any UN resolution for intervention in Syria, fearing that such a course of action would impact the global economy. Instead, China has played host to both Syrian government officials and members of the Syrian opposition in an effort to demonstrate neutrality and a desire to seek a political solution, a worthy initiative but one that falls short of substance.

Two years after the uprising began, with over 100,000 Syrians killed, 2 million refugees seeking shelter in neighboring countries, and at least 4 million displaced within the country, the conflict has cost far too much for the Syrian opposition to lay down their arms without first removing al-Assad from power. The Syrian government's use of sarin gas against its citizens is a line that cannot be uncrossed or easily forgiven.

While Russia's proposal to place Syria's chemical weapons under international control has been accepted by the Syrian government and China (due in part to its concerns of a possible nuclear North Korea), but rejected by the Syrian opposition -- technical and logistical challenges of the proposal aside, and assuming said proposal is not a delay tactic -- the civil war would continue. Whether by nerve gas or bullets or bombs, Syrians will continue to die.

To understand why Syria matters to Asian-Pacific leaders, one need only replace the former with the South China Sea disputes.

Alone in the world
For countries such as the Philippines and Vietnam, the UN's failure to intervene in Syria due to China and Russia's obstruction in the Security Council has direct implications with regards to the South China Sea disputes. Moreover, the Syrian conflict has highlighted just how Americans feel with respect to foreign intervention. If not in Syria where nerve gas has been used against its citizens, why then should the American public care to intervene in the South China Sea?

True, any conflict in the South China Sea would have an economic component of interest to the US and its foreign policy. The South China Sea, from the Strait of Malacca to the Strait of Taiwan, is an important energy trade route that sees nearly a third of the world's crude oil pass through each year, to say nothing of untapped natural resources. Any regional conflict would necessarily invite American intervention.

Therefore, the question is how long would it take for the US and UN to act in the event of a conflict in Asia-Pacific? One can predict such a scenario and its outcome.

Immediately one can discard any hope of a UN intervention. If establishing an international coalition willing to intervene in Syria has proven to be difficult, just how easy would a similar coalition be assembled to challenge China, a country larger, more influential, and more powerful than Syria?

Assembling a coalition of the willing, however, is the easy part.

As in Syria, any UN Security Council resolution calling for intervention in a South China Sea conflict would promptly be vetoed by Russia and China, for neither (but mostly China, who most likely would find itself at the center of the conflict) would want foreign powers in their backyard.

As China's claim to the South China Sea under its nine-dash map effectively encompasses all of the sea and disputed territories, Beijing would claim the dispute to be a regional concern rather than an international one. Russia, not wanting to be caught in the middle, would assume the role of China in the Syrian conflict by remaining "neutral" and hold off against foreign intervention.

The US would inevitably find itself pulled into a South China Sea conflict faster than Syria, but it would only do so after much kicking and screaming. Public opinion would be firmly against an intervention in the South China Sea. Political leaders, regardless of their views, would be held accountable to their constituents, thus leaving Congressional approval for military action a faint possibility. It would therefore fall upon the shoulders of the President at the time to decide when and how the US would act, preferably without engaging China directly.

Ultimately, the Philippines and Vietnam and whoever else decides to stand against China would find that they are very much alone in their fight, regardless of the human cost. The international community through the United Nations would be useless. The United States would assist if only it could avoid any unnecessary confrontation with China, and would certainly not entangle itself in squabbles such as the Spratly Islands disputes.

Under such circumstances, the only winners in a South China Sea conflict would be China and the US. The two would have compromised to resolve the conflict peacefully in which both sides come out on top, but at the expense countries such as the Philippines and Vietnam. Claimant countries to disputed territories would lose out, for it is the brutal reality that they are simply small fishes in a sea populated by two sharks.

Regional state leaders must engage their citizens to inform them the parallels of the Syrian conflict and what is happening in the South China Sea. Syria might not be their problem, but China most certainly is, and how the world has reacted to Syria would mirror how they would act to a South China Sea crisis. (Khanh Vu Duc is a part-time law professor at the University of Ottawa; and researches on Vietnamese politics, international relations and international law. He is a frequent contributor to Asia Sentinel.)