One death per hour over dowry in India 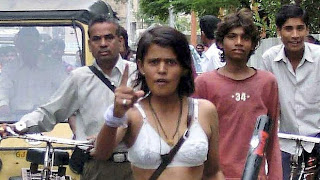 An Indian woman marches to the police commissioner's office to protest dowry harassment by her husband and in-laws, in Rajkot in the western Indian state of Gujarat.

New Delhi: One woman dies every hour in India because of dowry-related crimes, indicating that the country's economic boom has made demands for dowries even more persistent, women's rights activists say.

The National Crime Records Bureau says 8233 women were killed across India last year because of disputes over dowry payments given by the bride's family to the groom or his family at the time of marriage.

Dowry demands often continue for years after the wedding.

The conviction rate in dowry-related crimes remained a low 32 per cent, according to statistics the bureau published last week.

Indian law prohibits the giving or receiving of a dowry, but the centuries-old social custom persists.

Each year, thousands of young Indian women are doused with petrol and burned to death because the groom or his family felt the dowry was inadequate.

Loopholes in dowry prevention laws, delays in prosecution and low conviction rates have led to a steady rise in dowry-related crimes.Dowry demands have become even more insistent and expensive following India's economic boom.

Marriages have become commercialised. It's like a business proposition where the groom and his family make exorbitant demands. And the wealthier the family, the more outrageous the demands.