A ‘gecko’ with a taste for corruption 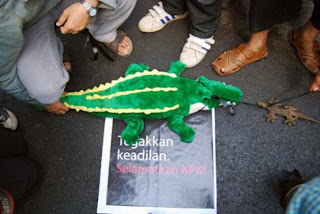 One of the more high profile targets of the KPK was the police which attempted to hit back by filing counter charges. In the outcry that followed, the institution was backed by students and the media which ran a pro-gecko campaign that depicted the gecko or the KPK taking on the crocodile or the police. The picture is of the campaign.

Once derisively dismissed as a lizard, Indonesia’s anti-graft agency has become the country’s most popular institution with its 100 per cent conviction rate

In the 15 years since the downfall of military dictator Suharto, Indonesia has emerged as a boisterous democracy. It’s been a laborious, often fraught, process attempting to establish institutions that guarantee a nation run in accordance with the law, rather than the whims of powerful individuals. But the most popular of these institutions today, is not the democratically elected Parliament, nor the executive office of the President; not the once-dominant military, nor the police or judiciary. It is rather, the country’s anti-corruption agency known as the Komisi Pemberantasan Korupsi or KPK, a lithe, sharp-fanged outfit, with the kinds of powers that would have Anna Hazare and his supporters swooning in delight.

Even-handed
As in many developing countries, corruption in the public sector and politics is among the most pressing popular concerns in Indonesia. The country ranked 118 out of 176 in Transparency International’s 2012, Corruption Perceptions Index, well behind India’s 94th position. Yet, while recent years have seen large-scale civil society protests against corruption, in nations ranging from India and Brazil, to Turkey and Egypt, Indonesia’s streets have been relatively quiescent.
One major reason for this difference is the KPK. Since it began operating in 2004, the KPK has investigated and prosecuted well over 300 cases, including dozens of members of Parliament, ministers, heads of government agencies, governors, mayors, judges and police officers. It has an astonishing 100 per cent conviction rate and has recovered state assets worth hundreds of millions of dollars.

The jail terms and fines secured by the KPK have real bite. For example, only last month, Zulkarnaen Djabar, an MP from the opposition Golkar Party and a member of a House of Representatives Commission overseeing religious affairs, was sentenced to 15 years in prison and fined $30,000. He was convicted for his role in the rigging of the tender for the procurement of Korans at the Ministry for Religious Affairs.

Other high profile examples of recent KPK “victims” include Anas Urbaningrum, the former chairman of the ruling party, Partai Demokrat (PD), who was forced to resign from his post in February this year, after being named a graft suspect for allegedly taking bribes in relation to the construction of a sports complex. Former youth and sports minister, Andi Mallarangeng, had resigned a few months earlier in connection with the same case, making him the first sitting cabinet member to be named as a suspect by the KPK.

“We have seen the KPK going after opposition politicians and incumbents equally,” says Endy Bayuni, a political analyst and former editor of the Jakarta Post newspaper. “That’s what has ensured their popularity amongst the people. They are not seen as picking and choosing their enemies. They’ve taken everyone on.” The flip side of this even-handedness is that the KPK is left with few friends, outside of the media and civil society.

Challenges
Parliament retains budgetary control over the organisation (last year, it had a budgetary ceiling of around $6 million, of which it spent just over half) and also needs to confirm the appointment of KPK’s five commissioners. In recent years, the house of representatives has attempted to pass legislation that would curtail the anti-corruption body’s powers.

So far, the KPK has fended off these challenges. “The public supports us and when the Parliament tries to curb our activities, they are seen as having something to hide,” smiles Bambang Widjojanto, one of the KPK’s sitting commissioners. “We must be creative,” he adds, citing the example of Parliament’s efforts to withhold funding for a new KPK building.

KPK personnel number around 700, but their current offices cannot house more than 450 people. Nonetheless, Parliament had refused for many years to authorise the funds for a new headquarters, with the result that the KPK decided to seek public donations via civil society allies. “We got creative,” chuckles Mr. Widjojanto. Shamed by the $40,000 collected by non-governmental organisations for the cause, Parliament finally gave approval earlier this year for the extra funds.

Run-in with police
A more dangerous opponent has been the police. Once the KPK began going after high-level corrupt police officers, the police force hit back by framing two commissioners on corruption charges, back in 2009. A massive public outcry followed, with street demonstrations in support of the KPK, the likes of which had not been seen since the days of Suharto’s toppling.

At the time, police chief detective Susno Duadji (himself a corruption suspect) compared the KPK to a vulnerable cicak (gecko) fighting a mighty buaya (crocodile), the police. The comment backfired. Students staged pro-gecko demonstrations, many newspapers ran cartoons with geckos lining up against an ugly crocodile and references to geckos fighting a crocodile have since become an integral part of the political imagery of Indonesia.

Eventually, the Indonesian President was forced to set up an independent commission of inquiry that exonerated the two commissioners of all charges.

Its powers
Unlike many anti-corruption organisations, it has the power to both investigate and prosecute. It is also allowed to conduct searches, make seizures, freeze assets, ban suspects from foreign travel, and intercept telecommunications, all without judicial approval. It can initiate cases without permission from any other governmental authority. KPK cases are tried by a special anti-corruption court that ensures speedy trials and are usually concluded within a year’s time.
Activism and governance
Unsurprisingly, many in Indonesia believe the KPK’s powers to be too wide-ranging. Dewi Fortuna Anwar, an analyst and adviser to the Vice-President, claims that the KPK’s activism has become a deterrent to honest government officials taking a risk. “Bureaucrats don’t want to touch infrastructure projects and many are delayed as a result,” she says, blaming fear of KPK investigation.

“Why are they afraid?” counters Mr Widjojanto. “If they are not corrupt they have nothing to fear.” He alludes to careful pre-investigation procedures that ensure a solid case before formal investigations are launched, which he credits with the agency’s 100 per cent conviction record.
Regardless, he admits that what the KPK achieves is only a drop in an ocean of corruption. In Indonesia, electoral democracy and decentralisation has also democratised corruption, with the power to dispense patronage and favours having expanded to include provincial and district officials who are now relatively autonomous actors. This is the font of the common joke, that while under Suharto, corruption was under the table, today, corruption includes the table.

Teten Masduki, one of the founders of the NGO, Indonesia Corruption Watch, points to the financing needs of party electioneering as a fundamental cause for continued political corruption. Nonetheless, he credits the KPK with having ended a culture of impunity. “Even if you are very powerful, you can no longer be sure that you will get away with it,” he says. “The KPK has given people hope.”  (The Hindu)