US as first among equals not good enough for China 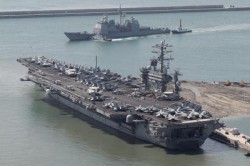 What is America’s ultimate aim in Asia today? Robert Manning’s and James Przystup’s insightful response to my comments about this question gets to the heart of the issue, in ways that help to illuminate the real choice America now faces in its relationship with China and its role in Asia

That choice today is quite stark: which does America want more, primacy or peace? Because the way things are moving in Asia today, it cannot have both.

This is what’s new. For four decades there has been no need to choose between primacy and peace, because US primacy has itself been the foundation of peace and security in Asia. But this has only been true because American primacy has been uncontested by other major powers in Asia. That has been the case ever since Nixon met Mao in 1972, and that is why Asia’s past 40 years of remarkable peace and stability have been, as Robert and James say, underwritten by US power.

Now that is changing, because China is challenging US primacy as the foundation of the Asian order. We might regret this — I certainly do — but we can hardly be surprised by it. It is the natural consequence of a profound shift in the distribution of power. And it means that, from here on, American efforts to perpetuate primacy in the face of China’s challenge will create not peace and stability but escalating rivalry and a growing risk of conflict.

So if, as Robert and James say, America’s ultimate aim is to preserve peace and stability, it should now be willing to forgo primacy and seek a new role in Asia which is more acceptable to China and thus offers better hopes for regional order. Which of these options America chooses will tell us what its real priories now are. Has primacy become an end in itself, or is it still a means to a higher goal? If Robert and James are right, America should be willing to step back from primacy.

I think Robert and James would argue that this is exactly what is happening. They suggest America now sees itself simply as a primus inter pares instead of an outright leader in Asia. The question of course is whether this is enough. That phrase, ‘primus inter pares’, is very suggestive, and what it suggests is clear primacy decently veiled by a pretence of parity. It was after all first used to describe the rule of the Caesars in the Roman Empire. The emphasis is very much on the primus, in other words. My hunch is that China will not settle for this. They will probably not settle for anything less than a position of equality with America in the Asian order: pares without the primus.

If the United States and China will both settle for something like this — a new regional order based on parity — the chances of peace and stability in Asia are quite good. If they won’t, then the future looks pretty grim. Of course there is a huge question about whether China would agree, but there remains an equally big question about America’s willingness to accept parity with China. And so far, I would argue, America has given no clear sign that it is willing to share power in Asia with China.

The evidence suggests the contrary: that the aim of US policy is to use all the elements of American power to preserve the old order based on US primacy, even if that leads to escalating strategic rivalry with China which undermines regional peace and stability. And that is why I think US policy today can fairly be called ‘containment’. If that’s wrong — if America really is willing, under the right conditions, to share power with China — then someone very senior in Washington needs to say so, loud and clear.

Hugh White is Professor of Strategic Studies at the Australian National University.