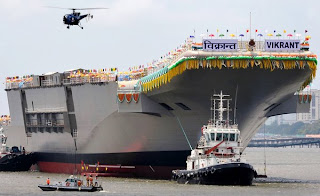 Tugboats guide the domestically built aircraft carrier INS Vikrant as it leaves the Cochin Shipyard after the launch ceremony in Kochi, India, on Monday.

NEW DELHI – India launched its first domestically built aircraft carrier Monday with an eye on regional rivals China and Pakistan, although it will be several years before the ship is fully operational.

The $5-billion Vikrant, meaning “courage,” was unveiled at a shipyard in the southern port of Kochi. The 37,500-ton ship will be outfitted with electrical cables, ventilation, weaponry and machinery before undergoing sea trials in 2016 and formal induction into the navy in 2018.
“I think it’s great,” said R. H. Tahiliani, an analyst and former Indian chief of naval staff. “It should have come much earlier, but better late than never.”

The ship has been under consideration since the 1990s and construction is three years behind schedule.

When completed, the Vikrant will allow India to project more power in the Indian Ocean, Arabian Sea and Bay of Bengal to counter rival Pakistan and a more muscular China. Beijing in recent years has signed port agreements with Pakistan, Sri Lanka and Myanmar and conducted anti-piracy operations in the Gulf of Aden, raising concerns of encirclement among Indians. Last year Beijing launched its first aircraft carrier using a hull imported from Ukraine.

Pakistan’s fleet consists mostly of destroyers, submarines and frigates, some Chinese-built.
With the Vikrant’s launch, India joins a small group of countries – the United States, Russia, France and England – able to design and build their own carriers. The diesel- and gas-powered Vikrant is 853 feet long and 196 feet wide with a deck the size of two football fields.

“It’s a very big landmark in India’s indigenization program for warships,” said Ajai Shukla, a New Delhi-based independent defense analyst. “This started in 1961 with a small boat and has been building for some time.”

But operating an aircraft carrier is far more costly, difficult and time-consuming than simply piling some aircraft onto a vessel, analysts said. Complex shipboard systems must be integrated, people trained and a network of support ships built and coordinated, assuming the goal is to create a carrier group.

“This is significant, but there’s still a long way to go,” said Lee Willett, London-based editor of IHS Jane’s Navy International, a defense industry publication. “If you look at the U.S., followed by the U.K. and France, it can take decades to build up a usable capability.”

Although China has a far larger annual defense budget than that of India -- about $140 billion compared with $49 billion -- India is the world’s largest weapon importer given that China makes most of its own weapons. The U.S. defense budget, by comparison, is about $710 billion.

“Some of our political leaders are more interested in imports for reasons you can guess,” said Tahiliani, also chairman of the India chapter of Transparency International, an anti-corruption watchdog.

At Monday’s launch ceremony, Elizabeth Antony, the wife of India’s defense minister, affixed a garland to the Vikrant and broke a coconut over its bow as a band played and multicolored flags fluttered on the dock.

This follows another milestone Saturday when India activated a 83-megawatt reactor on the 6,000-ton Arihant, or “slayer of enemies,” its first domestically built nuclear submarine. Prime Minister Manmohan Singh hailed the achievement as “a giant stride in the progress of our indigenous technological capabilities.”

The Vikrant, when operational, will be able to carry 25 to 30 aircraft, including Russian-made MiG-29K light combat aircraft and Kamov 31 multi-function helicopters.

Analysts said the domestically built portion of the Vikrant’s superstructure is around 80% to 90% and the mechanics up to 60%; the aircraft and other weapon systems were no more than 30% locally produced.

India operates one aircraft carrier, a 60-year-old British vessel acquired in 1987 and renamed the Viraat, although it’s increasingly obsolete and will probably be decommissioned soon. Russia is also set to deliver to India later in 2013, after years of squabbling over delays and costs, a refurbished Soviet-era aircraft carrier named the Vikramaditya. Courtesy Joyo News