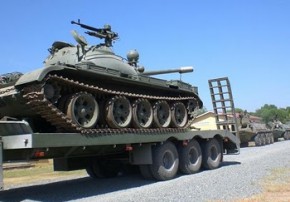 "Not to be used to plow the rice fields," defense minister says

Tanks, armored personnel carriers and mounted rocket launchers Thursday were driven on massive trucks up Cambodia's Highway 4 from the deep-water port of Sihanoukville towards Phnom Penh, adding to the tension that is gripping the capital.

Asked what the heavy weapons might be used for, Defense Minister Tea Banh was quoted as saying, apparently facetiously: "You don't have to wonder, they will not be used to plow the rice fields. Instead, they will be used to protect the country, and crack down on anyone who tries to destroy the nation."

There was speculation that the large shipment of military hardware could be a second part of an earlier contingent of similar weapons from a Black Sea port, possibly in Ukraine. China also recently sent the first batch of a dozen military helicopters, two of which were recently seen hovering over the capital.

The Phnom Penh government, which is closely allied with China, also recently accepted a consignment of 1,000 pistols and 50,000 rounds of ammunition, thought to be for the Phnom Penh constabulary, and which was construed as a 'gift' from the People's Republic.

Such a 'gift' could not but revive memories of the 1989 Tiananmen massacre in Beijing in certain quarters in the lead-up to the 28th July elections here when thousands of young people took to the streets on motorcycles, waving flags bearing the rising sun logo of the Opposition Cambodian National Rescue Party headed by Sam Rainsy, a French trained international banker.

At a time when there was wrangling over whether or not there had been fraud in the counting of the recent Cambodian election vote on 28th July, Sam Rainy was in Boston attending his daughter's wedding, returning today, eight days later.

The 64 year old opposition leader has in the past lamented that he had not spent nearly as much time with his immediate family as he should have, being involved so deeply in politics, and that he was making up for it now. He was criticized in some quarters for leaving for overseas so soon after the election, in which he was prevented from standing by the decision of Prime Minister Hun Sen and his ministers.

Sam Rainsy returned here early Friday to pursue his belief that the Rescue party had actually won the 28th July election by defeating the ruling Cambodian Peoples' Party but that there had been fraud in the vote-counting. The opposition Thursday walked out of a complaint session of the National Election Committee, claiming the committee had been improperly investigating the issues of massive fraud. The election committee is believed by some to be in Hun Sen's thrall. The committee has refused to permit the cross-checking of results with the original counts.

Although the Cambodia People's Party and the election committee agree the ruling party won the elections with 68 seats to the CNRP's 55, the opposition says its own counting showed it had won with a majority of 63 seats. In any case, the Rescue party won what many saw was a tremendous psychological victory given the barriers placed in its way by the ruling CPP.

I asked Sam Rainsy as he left the Rescue party HQ today what he thought about the arrival of all that military hardware, but received no response. However, another ranking opposition leader, Ms Soc Hua, expressed concern, saying: "I thought we were talking to the CPP about ballots, not about tanks."

On whether Hun Sen and the ruling party could use such military hardware to suppress street demonstrations, not just in cross-border international issues, people remember the military putsch in 1997 during which the CPP seized complete control of the country, killing up to 80 persons, most of them members of the royalist party, sometimes after severe torture. The royalist party did not win a single seat in the recent election.

Meantime, Phnom Penh's garment factories are operating at greatly reduced capacity as workers return home to the provinces by the thousands in response to the government's decision to increase security after the opposition warned they plan to hold mass demonstrations against the election results.

Parents in the provinces, remembering the earlier CPP bloodshed, are putting pressure on textile workers to return to their villages in the meantime, saying the capital is unsafe. This would be in response to the government's decision to increase security after the opposition warned they planned to hold such demonstrations against the election results -- but reports that they would take place next Tuesday haven't been borne out on the ground.

"Obviously this has the potential to seriously impact the garment industry," said Ken Loo, secretary general of the Garment Manufacturers Association in Cambodia.

On Thursday factories and the garment workers said in some cases almost 80 percent of workers had left their jobs to go back to the provinces, heeding their families' warnings of social unrest if the opposition CNRP decides to hold threatened demonstrations.

Travelling by road from Bangkok in neighboring Thailand back to Phnom Penh, I noticed that the numbers of young women leaving the factories lining Highway 4 was far fewer than normal, and that the trucks employed to take them to their Phnom Penh lodgings were more than half empty.

Meanwhile, around the central market area of the city this morning there were rumors about the 'Yuon,' a derogative word for the Vietnamese, causing alarm.

The Vietnamese, who in history have occupied vast tracts of Cambodian land and off-shore islands have been regarded as 'eaters of Cambodian soil,' though they did save the Cambodian people in early 1979 when they invaded and drove most of the Khmer Rouge to the border with Thailand.

But rumors take on a life of their own. "The people fear the 'Yuon' most of all," said one stallholder in the market. Sam Rainsy, in attacks on Vietnam for allegedly moving border marker posts, has used fear of the Vietnamese in their own campaign, against the advice of Western embassies.

At the same time, people here who know about Vietnam's own current internal economic difficulties, which are impacting even their hitherto prosperous coffee industry, is causing the Hanoi government enough concern without it becoming more involved in Cambodia." Asia Sentinel