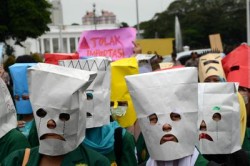 Indonesia came out of the 2008–09 global financial crisis fairly unscathed; its banks only had to deleverage themselves from a small portion of debt

But now its strong position is in danger: government meddling could cause a good economy to go bad. The government should eschew populism and fix Indonesia’s structural issues, including burgeoning fiscal subsidies and inward-looking trade policies, which pose a big threat to the country’s financial and monetary stability.

Rising oil demand in Indonesia due to a growing middle class has made Indonesia a net importer of oil for some years now. For years, the government responded by subsidising fuel and electricity. The problem is that this expenditure will take up as much as 25.1 per cent of the 2013 central government budget. This is far too much. Only 6.7 per cent of the central government budget goes to social programs; and capital expenditures, which are mostly spent on infrastructure, constitute only 15.7 per cent of central government spending. Having a large fuel subsidy restricts Indonesia’s capacity to spend in these growth-enhancing areas since Indonesia is bound by the terms of the Maastricht Treaty, a fiscal rule that caps the government deficit at three percent and the debt-to-GDP ratio at 60 per cent.

And ballooning oil subsidies are not just a fiscal problem. Giving away fossil fuels to all the population increases inequality, degrades the environment, discourages innovation in renewable energy and is a drain on Indonesia’s balance of payments.

What’s more, Indonesia’s dependence on oil and gas imports has made its trade deficit worse. Indonesia’s current account went into a 2.7 per cent deficit in 2012. Through mid-2012 most of the decline came from the rapidly shrinking volume of exports in the non-oil and gas sector, followed in more recent months by a widening of the oil deficit. The resultant annual trade deficit in 2012 was Indonesia’s first since at least 1998.

In addition to the weaker external demand, the decrease in export growth across the economy is also due in part to government policy. Indonesia recently banned raw and semi-processed rattan exports, put an export tax on 65 minerals and enacted some inward-looking import policies. The more restrictive import policies, especially those that restrict imports of intermediate goods, may have contributed to weak performance of exports.  This is because one ninth of total imports consist of intermediate goods that are re-exported.  Although the bulk of overall exports consist of domestic value-added due to the high share of commodities, a significant share of manufactured exports consists of imported value-added components.

Trade policies have also contributed to skyrocketing prices on basic food items. In the spirit of ‘self-sufficiency’, since 2010 the government has gradually re-introduced import quotas on a range of agricultural products. The new licensing system and port-entry restrictions led food prices to soar. For example, the prices of shallots climbed from US$1.20 a kilogram to $7 in March alone, while the price of garlic tripled from around Rp.20,000 per kilogram in January to Rp.60,000 in March. The garlic price increase shows just how distortionary government policies are. Because almost 90 per cent of Indonesia’s garlic comes from overseas, a domestic quota was always going to cause a supply shortage and inflation.

Protectionist policies are especially unwise given weak external demand. In 2012, exports to China alone declined by 5.6 per cent from 2011 levels — a huge turnaround, since China’s demand for Indonesian products had been growing significantly for a long period of time. One reason could be that China recently put restrictions on imports of low-quality coal, which makes up about one-third of Indonesia’s coal export to China. In the context of this restriction and China’s new growth model, Indonesia’s weak export performance could be a structural problem.
These policy decisions have already had broader social and economic effects. The across-the-board increase in food prices led the poverty basket inflation rate to increase from its near three-year low of 5.3 per cent in November 2012 to reach 6.1 per cent in February 2013. And Standard and Poor downgraded its outlook on Indonesia’s credit rating based on the continuing pressures on the fiscal budget from fuel subsidies, the threat of inflation and the widening current account deficit.

As a reaction to threats to macroeconomic stability — including downgraded growth, which the World Bank projects will be less than 6 per cent in July 2013 — some government agencies and the central bank have begun to reverse some of their policies. But merely backing away from protectionism is not enough. Indonesia needs to bring systemic change to its economy.

Structural, rather than cyclical, fiscal and trade issues have complicated monetary management, including inflation, exchange rate, Balance of Payment,  and interest rates, and have led to ineffective and costly monetary policies.  China’s new lower growth norm and its trade restrictions on low-quality coal, as well as forecasted lower prices for commodities, may make it necessary for Indonesia to make structural changes so as not to rely too much on exporting raw commodities to big emerging markets, like China, anymore.  Higher quality fiscal spending and good monetary management, including finding the right balance between higher inflation, higher interest rates, a depreciating Rupiah and lower growth will be keys to a smooth structural transition while maintaining monetary stability.  The most recent portfolio outflow as a result of the Fed winding down its quantitative easing measures and fiscal stimulus, as well as increasing its interest rate, has reminded us of the integrated global banking and financial system we have and its many transmission channels of monetary policies from one country to others.  Not only will the Central Bank play a crucial role, but the new Financial Services Authority in charge of prudential banking supervision will also play a key role in financial stability.  Foreign direct investment has also shown signs of weakening prompting a better investment climate, including revising the rigid labor laws.

Indonesia’s economy remained insulated from the 2008–09 crisis, which was partly helped by high commodity prices and capital inflows driven by monetary expansion in some developed countries, but whether that was good economic management or pure luck is uncertain. Now, Indonesia’s economy is exposed to the destabilising effects of populist domestic politics and a lack of leadership. A bad economy is said to cause political instability. But Indonesia shows that causation goes both ways: bad politics can lead to economic instability.

Maria Monica Wihardja is a lecturer at the Department of Economics, University of Indonesia, and a former researcher at the Centre for Strategic and International Studies, Jakarta. She is also Associate Editor at the East Asia Forum Indonesia desk.
This article is based on the Think Tank 20 Report to be published by Brookings Institution and other Research Institutions in late August 2013.