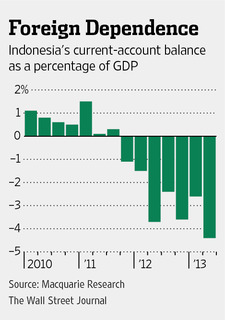 Emerging markets are beating a sharp retreat, but Indonesia is suffering more than most. Shares in Jakarta are down 11.6% in the past month, compared with a 1% fall in the MSCI Asia-Pacific index. The rupiah has fallen 4% against the dollar in this period, making it one of the worst-performing currencies in the region

The main trigger is concern that if or when the U.S. Federal Reserve begins scaling back its bond-purchase program, Indonesia could be hurt more than some of its peers. Jakarta runs a sizable current-account deficit—it reported a higher-than-expected deficit of 4.4% of gross domestic product in the quarter ended June 30.

Indonesia's central bank may have disappointed investors too. The central bank raised the reserve requirement for Indonesian lenders last week but held rates steady at 6.5%—some investors may have been looking for a more robust defense of the currency.

Despite the gloom, all is not lost for Jakarta, however.

The government has already taken steps that should begin to address the current-account deficit problem. Net oil imports were equivalent to 83% of the deficit in 2012, partly because of a fuel-subsidy system that juices demand. But this demand may be blunted since Jakarta raised gasoline prices by 44% and diesel by 22% in late June. Nomura estimates the current-account deficit will shrink to 2.8% of GDP for 2013.

Compared with other emerging markets, Indonesia also benefits from relatively stable foreign investment to finance a big part of its current-account deficit. In 2012, foreign direct investment plugged 58% of Indonesia's current-account gap. By contrast, FDI financed only 23% of India's deficit in the year ended March, which means India is more exposed to hot money flows.

Investors are likely to remain bearish on Indonesian stocks pending a stronger response from policy makers, says Macquarie. Reining in fuel subsidies further would help reduce the current-account deficit. Changes to rules that limit foreign ownership in mining could attract more FDI, for instance. A further increase in interest rates would also send a signal that policy makers aren't going to stand aside while the currency takes a beating. Wall Street Journal