At least 6 die in bomb blast in south Philippines 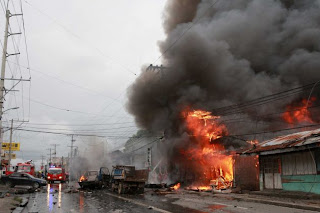 Firefighters try to contain the fire from a powerful explosion in Cotabato city, southern Philippines on Monday Aug. 5, 2013. A Philippine military official says at least four people had been killed and injured several others after a powerful bomb exploded during rush hour along a busy road that also damaged vehicles and set business establishments on fire in the south

COTABATO CITY, Philippines — A powerful bomb apparently rigged to a vehicle exploded Monday during rush hour along a main road in a volatile southern Philippine city, killing at least six people and wounding more than 30 others, officials said.

Troops and police closed off the area along Sinsuat Avenue in Cotabato city as firefighters and ambulances arrived at the chaotic scene, where witnesses saw at least four people bloodied on the pavement as cars and buildings burned after the explosion.

Senior Superintendent Rolen Balquin, who heads the city police, said the dead included a police officer aboard a passing van. Another police officer on board that van was wounded by shrapnel and was in critical condition in a hospital.

At least 33 people were wounded by bomb shrapnel and flying debris from cars and motorcycles damaged by the explosion, he said.

Cotabato, a bustling trading hub 880 kilometers (545 miles) south of Manila, has been hit previously by bombings blamed on Muslim rebels and extortion gangs.

The bomb exploded Monday afternoon as a bulletproof SUV, carrying city administrator Cynthia Guiani-Sayadi, was passing by. Sayadi was not hurt but one of her police bodyguards in a security van was killed, officials said.

Balquin said they were looking at the possibility the attack could have targeted Guiani-Sayadi. He said the city administrator "had been receiving threats for the past few days."

President Benigno Aquino III's administration condemned the bombing and vowed to hunt down those responsible.

"We condemn the use of violence to kill and maim our countrymen who are peacefully going about their daily lives," Aquino's spokesman Herminio Coloma said. "We'll hold accountable these criminals who terrorize our society."

Philippine authorities did not immediately point to any suspects, but government forces have been on alert in the volatile region due to recent attacks and bombings by a breakaway Muslim rebel faction opposed to peace talks between the government and a main insurgent group.

Suspected members of the rebel faction, the Bangsamoro Islamic Freedom Movement, detonated a bomb that killed the manager of a bar and wounded four others along Sinsuat Avenue in Cotabato city last July, the military said.

The breakaway guerrillas oppose talks between the government and the 11,000-strong Moro Islamic Liberation Front, predicting the negotiations would go nowhere. They vowed to continue fighting for a separate homeland for minority Muslims in the south of the largely Roman Catholic Philippines. Courtesy Joyo News