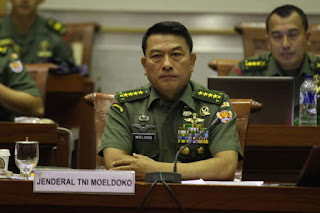 Army chief of staff Gen. Moeldoko, the sole candidate for the top post at the Indonesian Military (TNI) profile and wealth of more than $3 Million.

Army chief of staff Gen. Moeldoko, the sole candidate for the top post at the Indonesian Military (TNI), said on Wednesday that Indonesia should revisit the concept of national defense with the emergence of new security threats from non-state actors, including terrorism and communal conflicts.

Speaking to members of the House of Representatives (DPR) Commission I on defense, Moeldoko, who was required to undergo a fit-and-proper test at the House, argued that a review was needed as there were possible security threats in the “grey areas” that were subject to military operations other
than war.

“The TNI is concerned about the possible occurrence of asymmetric warfare due to the archipelagic nature of the country — which makes it prone to infiltration —, democratization, the pluralistic nature of [our] society and globalization, which has had a multi-dimensional impact on the country,” he said. “The TNI must be ready for asymmetric wars which have unusual, unexpected or irregular characteristics.”

The country has faced social conflicts, ranging from religious to agrarian disputes in the years following the downfall of Soeharto in 1998. With the 2014 elections approaching, many analysts have predicted that social conflicts in the country could escalate.

The government has consequently proposed a number of items of security-related legislation, including the national security bill, which allows for the deployment of the military to deal with riots.

However, the legislation has been strongly opposed by human rights activists, who claim that it could lead to rights abuses.

Under the 2012 Law on Social Conflict Management, the TNI can be involved in resolving social conflicts, but they can only act under the command of the police.

When asked about his strategy to improve discipline among soldiers, Moeldoko said that the key was training.

“We have a program to humanize soldiers so that they will not easily lose their temper when dealing with incidents that might provoke them. We will also strengthen subordinate commanders to ensure soldiers follow instructions in the field,” he said.

The TNI was severely criticized recently following a series of incidents, including the shooting of four detainees at a prison in Yogyakarta by members of the Army’s Special Forces.

The government has annually increased the budget allocation for the TNI. This year, the TNI received Rp 81.3 trillion (US$759 million) up from last year’s Rp 7.56 billion. If approved by lawmakers, the TNI will receive Rp 83.4 trillion next year.

During the fit-and-proper test on Wednesday, Moeldoko affirmed the TNI’s non-affiliation to any political parties after the lawmakers raised concerns over whether he would be neutral during the elections.

Tjahjo Kumolo from the Indonesian Democratic Party of Struggle (PDI-P) told Moeldoko that his predecessors had vowed to be neutral approaching the 2004 and 2009 elections, but they failed to live up to their claims. “We don’t want the TNI taking sides during the election,” said Tjahjo.

Moeldoko said, “My stance is firm and clear. I will not compromise in protecting the Unitary State of the Republic of Indonesia [NKRI].”

Commission I chairman Mahfudz Siddiq told reporters that his commission would closely monitor the TNI to ensure its impartiality in the elections. “He [Moeldoko] has promised to be neutral, thus we will keep an eye on the TNI to make sure that he keeps his promise,” Mahfudz, a Prosperous Justice Party (PKS) politician, said.

Contacted separately, defense observer Iis Gindarsiah from the Center for Strategic and International Studies (CSIS) said that if selected commander, Moeldoko should focus the TNI on its main job of protecting the country from external threats.

“I think the TNI must not be involved in dealing with communal conflicts because that is the responsibility of the police. However, as social conflicts will likely escalate in the near future, he must deploy soldiers to aid our police without getting too much involved in the conflicts,” Iis said. All factions on Commission I agreed to endorse Moeldoko. The commission will forward its assessment to the House plenary meeting on Aug. 27 for approval.