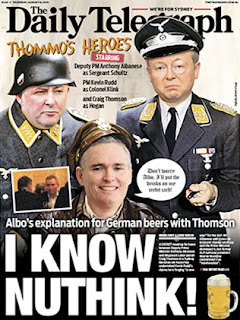 A GIANT ego.
A narcissist.
A micro-manager.
An impulsive control freak.
A haphazard and secretive decision maker.

This is not what Kevin Rudd's political enemies think of him. It's what many of his colleagues do.

Whether openly or whispered in hushed tones to journalists, this is the picture once painted by his fellow ministers, MPs, public servants and diplomatic associates.

It's a decent rap sheet - one that easily tops the usual bile directed at colleagues or opponents in the den of iniquity that is politics. But nothing that borders outlandish.

Then, one day, the dam broke. The outspoken and literally outgoing member for Bendigo Steve Gibbons took to Twitter and publicly declared his former leader a "psychopath". Among other less than genteel terms.

Gibbons is a man who is routinely and rightly pilloried for making crude, stupid and nasty remarks in the name of cheap publicity.

But this time the term took off, which perhaps says more about Rudd than it does about Gibbons.

So is it true? Is the man running this country really a psychopath, given the aforementioned ferocious descriptions appear to tick plenty of the boxes that define such a diagnosis?

Firstly, one has to demystify the term.

Such a designate is no longer deemed by experts to be the exclusive domain of murderers, serial killers and rapists.

No, you could indeed be sitting next to one. Your boss could be one, or, perhaps more likely, your high-flying CEO in his spacious corner office suite.

In fact prominent Australian psychotherapist John Clarke claims that between one and three per cent of the Australian population could be certifiably deemed psychopathic, and he warns not just police to keep a look out but companies and political powerbrokers.

Anthropologist Stephen Juan suggests that one in 10 companies are headed by a corporate psychopath.

It seems psychopaths are everywhere, and they are more likely to wear a suit and tie, than carry a bloodied weapon or be pointing a sawn-off shotgun.

"One of the misconceptions about psychopathy itself is that people think a psychopath goes out and kills people. By definition, they are somebody that is recklessly indifferent to any physical, emotional harm they may cause," criminal mind expert Steve van Aperen said.

"There are certainly many undiagnosed psychopaths in business and politics."

Juan says often people get confused between the terms psychopath and psychotic, which makes people less inclined to label someone as the former and thus grouping them with such fiends as Ivan Milat, Charles Manson or Martin Bryant. The distinction is reality, he says. Those suffering from psychosis have lost grip on reality. Those deemed psychopathic are very much aware of it, and are attempting to control it.

They are often easy to spot, Juan says, and follow a defined set of traits that set them apart from normality.

"The corporate psychopath is the type of psychopath that gets into politics because they are usually exceedingly ego-oriented - it is all about them. So even when they get criticism, it is still all about them," he says.

The PM says he's not surprised by polling showing Peter Beattie well behind the coalition in Forde.

"They are the great users, the great manipulators, they often have aides and underlings do work for them, and expect blind loyalty but they don't give loyalty in return. They use everyone for gain.

"Everything is about them. If you talk to them in a conversation about your issues, they will immediately turn it around to their issues. It's as if no one exists other than them."

They are always exploiting issues for their own gain, says Dr Juan.

They climb the corporate ladder very effectively, they are often very charming and articulate, often very good looking which they use to their advantage.

It is the only thing they exist for. Themselves. They can't be trusted, they will lie to your face and deny they have when they are caught. They never own up to their own actions, they are always blaming others. They are polar opposites in public and private, with the former a place for their charm offensive to be exercised, and the latter a dark place of indifference and loathing.

It's the psychopath's modus operandi; a persona that they can't escape from, a disguise that soon becomes arduous to hide.

In a bid to unmask those with psychopathic tendencies and prevent crime, Canadian criminal psychologist and FBI adviser Robert D Hare created the Psychopathy Checklist in the early 1990s that remains the gold standed for reference.

Whether unfairly or resoundingly just, Kevin Rudd's name has oft been etched beside those traits, by members of his own camp or from across enemy lines.

His impulsiveness is well documented, from rushed decision making done without proper consultation with colleagues or stakeholders, to his "policies on the run" such as the changes to the Fringe Benefit Tax system that crack down on salary-sacrificed cars, to the detriment of the struggling car industry.
On these rash methods, he is internationally renowned.

"He makes snap announcements without consulting other countries or within the Australian government," said a US Embassy official of Kevin Rudd in a leaked memo to the Whitehouse.

Superficial charm? The opposition have climbed aboard this freight train, frequently referring to the PM as fake. Even Fairfax editors denounce the man who is smiling, caring Kevin the Queenslander, but is vastly different behind closed doors, where no cameras lurk.

"Much has been written and said about Kevin Rudd when the camera is rolling and Kevin Rudd in private," editor of the Launceston Examiner, Martin Gilmour said.

"Based on my experience on Thursday morning when the doors closed, he was about as engaged and charismatic as a silt rake."

"I mean this guy is a once-in-a-century egomaniac," said Mr Latham in his jilted-lover tome.
Poor behavioural control? The RAAF air hostess who copped a Rudd spray because his special meal wasn't available; the foul-mouth tirade delivered while filming a video message in Chinese; the exodus of 16 staff from his office in his first year as PM due to his "short fuse and unreasonable demands" and the current rumours that 80 per cent of his staff hate his guts.

In a News Corp Australia survey of 30,000 voters last month voters were given a list of words to describe Rudd.

The results were stark: smug, manipulative and egotistical.

"One of the traits of a psychopath is a lack of remorse. Has Kevin Rudd shown that? In relation to the pink batts saga, has he ever come out and said sorry to individuals for him making that bad decision? The answer is no," Ms Minisini said.

While Rudd may exhibit some psychopathic tendencies, it is near impossible for an outsider to officially determine, says a more restrained Dr Juan.

"They would have to get to the bottom of their motivations," he said.

"There would be some people that would say that he is (a psychopath), given in his early administration, many of his aides left because he was difficult to work with.

"You can see these traits in many politicians, not just Kevin Rudd. He has tendencies that are very egotistical, ego centred, but is it only about him? That is the real issue."

Research conducted by Western Sydney University professor Peter Jonason claims that while Machiavellianism is apolitical in its nature, there is a "left-leaning bias for those individuals high on psychopathy".

"Psychopathy may thrive in more liberal areas because of the lessened focus on law and order. And thus, it is within liberal areas that psychopathy may have a freer reign, therefore, freeing up men to benefit from such an approach to life," he said.

But there are other known traits of the psychopath that Rudd bypasses. Psychopaths are usually submerged in sexual promiscuity (not sure a visit to Scores counts) and have poor marital relations.

Despite the obvious shortcomings, several clinical psychologists and researchers believe possessing the traits of a psychopath could be advantageous for someone seeking political power.
A research paper lead by Emory University's Scott Lilienfeld explored such issues, pinpointing which US presidents were more likely to exhibit psychopathic traits.

"Some psychopathic traits, such as interpersonal dominance, persuasiveness and venturesomeness, may be conducive to acquiring positions of political power and to successful leadership," the paper claimed. It cited Winston Churchill and Lyndon Johnson as perfect case studies, claiming both possessed very real characteristics of a psychopath, but who "managed to parlay these traits into political success".

"When psychologists talk about psychopaths, what we're referring to are people who have a distinct set of personality characteristics, which include things like ruthlessness, fearlessness, mental toughness, charm, persuasiveness and a lack of conscience and empathy," he said.

Those beasts, however, are rare, says Dr Juan, who believes most psychopaths who get to the top of their game come crashing down in a heap when their true motivations and their extreme sense of self-worth and importance are laid bare before the public.

Cue disgraced Italian President Silvio Berlusconi, the balding media tycoon who thought he was so far above the law of the land, and predominant moral standings, that he thought nothing about paying an underage prostitute for sex, and then abused his powers in an attempt to cover a multitude of sins.

"Psychopaths are the ones that are do incredibly stupid things, things that are easily found out, then they lie and deny. This is a general pattern and you see that in politicians around the world. Berlusconi in Italy, Weiner in New York. It is as if they think they are above scrutiny. Yet of course they live in a fishbowl."

"At the end of the day, most of them get caught out."

Where Kevin Rudd sits on the scale, if at all, is an open-ended question - one that only a psychiatrist and a comfortable couch could deduce. Besides, maybe we should be grateful that our top politicians could be psychopaths. At least we know where they are.