India's rupee hits another record low against US dollar 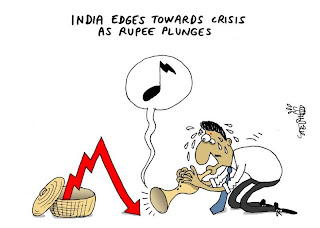 India's rupee hits another record low against US dollar

India's rupee hit another record low against the dollar on Wednesday, despite policymakers taking fresh measures to try to put a floor under the sliding currency and stave off a full-blown financial crisis.

Until recently, India was constantly bracketed with China as an inexorably rising economic power; but with growth slowing sharply, the country is now among the hardest-hit of a string of developing countries that look dangerously exposed to violent swings in global markets.

When central bankers embarked on the drastic policy of quantitative easing – untested on such a large scale – they always knew it was extremely risky but judged that the price of a prolonged slump across the rich world was greater than the threat of inflating unsustainable bubbles in the world's financial markets. That judgment is about to be put to the test.

Since May, when Fed chairman Ben Bernanke announced his plans to "taper", and eventually halt, QE as the US recovers, these investment flows have gone into reverse. Governments in developing countries face plunging currencies and stock markets together with rising borrowing costs and some analysts are even starting to draw comparisons with the devastating Asian financial crisis of 1997-98.

Raghuram Rajan, the former chief economist of the International Monetary Fund, faces a baptism of fire when he starts his new job as governor of the Indian central bank next month.
With the rupee plunging to record lows against the dollar, the authorities in New Delhi face a severe test, trying to control the likely surge in inflation, as imports become more expensive, without clobbering growth. As Leif Eskesen of HSBC puts it, "the balancing act between currency stabilisation and growth protection is not easy". So far, the authorities have merely stoked the rising sense of panic in financial markets. Their latest batch of policies, announced on Tuesday night, included a promise to inject liquidity into financial markets by buying $1.2bn-worth of bonds but brought only a brief period of calm before the sell-off resumed.

If investors lose confidence in India's ability to fund its growing current account deficits, they could pile out of government bonds, pushing up interest rates across the board and squeezing the life out of the economy.

Bangkok was the crucible of the Asian financial crisis that struck in 1997, as Thailand became the first country to call for help from the International Monetary Fund after a doomed (and costly) effort to defend its currency, the baht, against speculators.

Few analysts believe the country faces a repeat of that chaotic period but fears about the outlook for Thailand were exacerbated earlier this week by news that its economy has slipped into recession. The 0.3% decline in GDP in the second quarter, following a 1.7% contraction between January and March, marked a dramatic turnaround from 6% growth last year.

Bangkok's stock market saw a run-up of 50% between early 2011 and May; but even before investors' "taper tantrum", there had been doubts about the sustainability of its economic model, which has become increasingly reliant on rapid credit growth, with household debt rising to a worrying 80% of GDP. The Set index of leading Thai shares has dropped by more than 15% since May.

Indonesia's currency, the rupiah, has slipped to its lowest level against the dollar for four years, and share prices have plunged by more than 10% in the past week alone, as investors digest the risks that the Fed could soon start phasing out QE.

As well as a reversal of investment flows, Indonesia is also being hit by falling commodity prices, sparked by concerns that China's economy is slowing. That helped the country's current account deficit to increase to 4.4% of GDP in the second quarter of this year — close to levels last seen in 1996, before the Asian financial crisis, and raising the alarming prospect of a balance of payments crisis if interest rates continue to rise.

Indonesia looks particularly vulnerable to what economists call a "sudden stop" in capital flows, since as much as a third of its government bonds are owned by foreigners. During the late-90s crisis, Indonesia was forced to seek a $40bn bailout from the IMF. The controversial policies imposed in exchange for the rescue package sparked widespread protests, and led to the overthrow of the Suharto regime.

After a decade in which it joined the ranks of the world's economic superpowers, China's future growth path looks increasingly in doubt.

Unlike many of its fellow emerging market players, China's financial markets remain only partially open to foreign investors, so it may be less at risk from a reversal in capital flows as a result of QE coming to an end. However, Beijing has plenty of problems of its own, not least an alarming legacy of bad loans from the credit boom that was deliberately unleashed to cushion the Chinese economy against the knock on effects of the global financial crisis.

Chinese authorities have repeatedly made clear their intention to try and switch from an export-dependent model of growth, to a more balanced, consumer-led pattern. Even if that switch is managed smoothly, it will hit exporters of the commodities and investment goods, such as machine tools, for which the country has been so hungry in recent years. But there are growing fears of a "hard landing", if this radical transition goes awry.

Analysts at HSBC argue that a China crash, rather than the end of the Fed's QE programme, actually presents the greatest risk of a sudden and damaging reversal in global capital flows, from the emerging world back to the safe haven of developed countries.