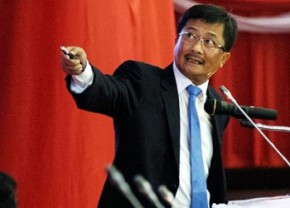 The arrest of the nation's chief oil regulator could unmask a deeper game
The latest high-profile scandal to hit Indonesia has quickly taken on political overtones with the arrest this week of the nation's top oil and gas regulator leading to a potentially wider probe of figures close to the government of President Susilo Bambang Yudhoyono.

Investigators say officials of the powerful Ministry of Energy are under investigation and that Energy Minister Jero Wacik, a key strategist for the ruling Democratic Party, could be called to testify.

In addition, the investigators say, they are investigating reports that the bribes were actually intended to finance the Democratic Party's upcoming nominating convention, which is intended to name a candidate to succeed Yudhoyono in 2014 presidential polls.

The sudden surge of political bad news for Yudhoyono started when Rudi Rubiandini, the chairman of upstream oil and gas regulator SKKMigas, was taken into custody on bribery charges at his home on Tuesday night by corruption investigators.

The body he chaired has been in operation for under a year -- its predecessor was disbanded by the Constitutional Court for being unconstitutional -- and the oil and gas industry gave Rudy high marks for managing a smooth transition to the new organization. Industry insiders said SKKMigas was an improvement over BPMigas, the earlier regulator, and Rudi has said his goal was greater transparency in regulating the lucrative but troubled industry.

The Corruption Eradication Commission (KPK) charged Rudy with accepting a US$400,000 bribe from a little-known Singapore-based oil trading firm known as Kernel Oil. Investigators have so far seized $320,000 in cash from a safe deposit box belonging to Rudi and 180 grams of gold and 60,000 Singapore dollars from a safe in his office. Rudy was quickly suspended by the president from his post and also lost a position on the board of Bank Mandiri, a large state-owned lender.

All of this would be bad enough as the country, once an OPEC member, struggles to boost dwindling oil production at a time when regulatory uncertainty has spooked foreign investors and led to declining exploration and billions of dollars in investments being put on hold.

Given the political heat of the moment, however, and a wide-open race for president already underway, the case has taken on wider ramifications. With the Democratic Party already badly wounded by a series of other scandals, the arrest of Rudi could hardly come at a worse time for Yudhoyono.

On Thursday, the KPK said it was investigating whether the bribes received by Rudi were actually intended to be passed to the Energy Ministry and the Democratic Party. "We will continue to investigate it," KPK deputy chairman Bambang Widjojanto said at his office.

Arrested and charged in the case along with Rudy was a man identified as Simon Tanjaya, an executive of Kernel Oil; and Deviardi, a golf pro who supposedly acted as a middleman. In addition, KPK investigators searched the offices of the Energy Ministry's secretary general, Waryono Karno, seizing a black bag containing $200,000.

A KPK spokesman said the case may soon expand to formally include Waryono, who denied any involvement in bribery.

The KPK's Bambang said Energy Minister Jero Wacik may also be called for questioning. Jero said he had no idea why the ministry was being looked into and denied there was a money trail to the Democrats.

"It's not related to the party. There's no party matter here," Jero said on Thursday.

If the probe keeps going higher, the case could have an enormous impact on the 2014 race for president. Jero Wacik is a key presidential advisor and is playing a major role in the party's effort to resurrect its image by holding a relatively open nominating process and convention over the next several months. The nomination process has been carefully crafted to bring the party back into the public eye at a time when polls show the Democrats deeply out of favor.

If political rivals of the Democrats -- and there are many -- sniffed out the scandal and gave the lead to corruption investigators, the real game is to further hurt the party's chances to play a major role in 2014. An ongoing construction kickback scandal has already claimed the party's chairman, Anas Urbaningrum; Sports Minister Andi Mallarangeng, a close protégé of the president; and a number of lesser officials.

The intrigue spread still deeper on Thursday when press reports circulated that businessman Wishnu Wardhana, the CEO of local coal giant Indika Energy, supposedly owns Kernel Oil. The charismatic, US-educated Wishnu is a rising star in business in Indonesia and is also involved in the Democratic Party nominating convention, serving on a steering committee as an independent member.

He quickly denied any involvement. "This is absolutely not true," Wishnu told reporters. "Kernel Oil has nothing do with Indika Energy or its subsidiaries. Asia Sentinel