The $7 Trillion Problem That Could Sink Asia 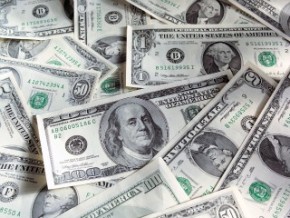 “It’s our currency, but it’s your problem.” This musing from Nixon-era Treasury Secretary John Connally is about to find new relevance as the White House battles Republicans over raising the U.S. debt limit.

Connally couldn’t have foreseen how right he would be 42 years on as Asia sits on almost $7 trillion in currency reserves, much of it in dollars. Asia’s central banks engaged in a kind of financial arms race after a 1997 crisis, stockpiling dollars as a defense against turmoil. That altered the financial landscape in two ways: One, Asia now has more weapons against market unrest than it knows what to do with. Two, Asia is essentially America’s banker, with China and Japan having the most at stake.

That might be less problematic if not for Capitol Hill’s propensity for shooting itself in the foot. A pointless squabble over the debt ceiling prompted Standard & Poor’s to yank the U.S.’s AAA credit rating in August 2011, sending panic through global markets. Asia is now bracing for months of posturing when the U.S. Congress returns from its August recess.

In a perfect world, Washington’s bankers would threaten to call in their loans. Asian nations would sit White House and congressional leaders down and tell them to get their act together. But Connally’s 1971 observation is infinitely truer today than at any time in Asia’s history. We need to stop considering huge reserve holdings as a financial strength. They are a trap that is complicating economic policy making. It’s time Asia devised an escape.

China isn’t without leverage. It’s no coincidence that new Treasury Secretary Jacob Lew’s first overseas visit in March was to his banker-in-chief, Xi Jinping, in Beijing. Nor did it go unnoticed that Lew was the new Chinese president’s first foreign-official meeting. Lew may have been sending Xi a signal this week by calling on Congress to act “in a way that doesn’t create a crisis” on fiscal matters.

But that leverage is limited. Xi and Premier Li Keqiang are engaged in a risky rebalancing act, trying to wean the Chinese economy off exports without fanning social unrest. Another debt-limit tussle would fuel market volatility, strengthen the yuan as the dollar plunges, and result in the loss of tens of billions of dollars in China’s portfolio of U.S. Treasuries.

“They don’t like it,” says Leland Miller, the New York-based president of China Beige Book International. “But while they’re sure to make some loud noises about it, at the end of the day, they understand they have no option but to accept the hand they’re given.”

In Tokyo, Shinzo Abe faces a similar dilemma. An important pillar of the prime minister’s plan to end deflation and restore healthy growth is a weak yen. The currency’s 17 percent drop since mid-November has helped even down-and-out Sony Corp. eke out some profits. Yet the yen would surge anew on another U.S. downgrade: In 2011, a giant flight-to-quality trade drove huge amounts of capital Japan’s way.

The more Asia adds to its holdings of U.S. debt, the harder they become to unload. If traders got even the slightest whiff that China was selling large blocks of its $1.3 trillion in dollar holdings, markets would quake. The same goes for Japan’s $1.1 trillion stockpile. So central banks just keep adding to them. Pyramid scheme, anyone?

Never before has the world seen a greater misallocation of vast resources. Loading up on dollars helps Asia’s exporters by holding down local currencies, but it causes economic control problems. When central banks buy dollars, they need to sell local currency, increasing its availability and boosting the money supply and inflation. So they sell bonds to mop up excess money. It’s an imprecise science made even more complicated by the Federal Reserve’s quantitative-easing policies.

At the very least, Asia should stop adding to its dollar holdings and consider ways to bring more of those funds home. They could be used for infrastructure, education, research and development on cleaner energy, or any other vital investments in the future. The question, of course, is how?
There is a clear first-mover advantage for smaller economies. South Korea (with $53 billion in Treasuries), the Philippines ($40 billion) or Malaysia ($18 billion) could try to dump dollars on the sly. Bigger ones couldn’t pull that off in this hyperconnected, 24/7-news-cycle world; news of sizable central-banker sell orders would inspire copycats.

Washington can help, and not just by avoiding another suicidal debt-limit fight. The Treasury should engage with its Asian counterparts in a cooperative, transparent brainstorming process to draw down their reserves without devastating markets. It’s in the U.S.’s best interest to keep more of its debt onshore, Japan-style, by attracting greater purchases from cash-rich U.S. companies. That would make the U.S. less vulnerable to capital flights in the future.

If ever there were a time for a currency summit, it’s now. Perhaps the International Monetary Fund or the Group of 20 can host the debate. Such high-level discussions would help Asia set goals and consider the mechanics and timing of reclaiming more of its savings. Only then will all those dollars start being the solution to Asia’s challenges, not the problem.
(William Pesek is a Bloomberg View columnist.)