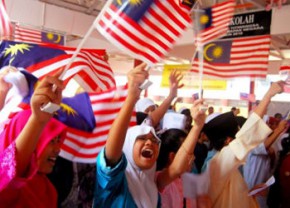 The post-Merdeka paradigms are near collapse

The ritualistic month-long celebrations of Merdeka (independence) activities in Malaysia have largely lost their meaning. Discussion about the roles that different groups played in the road to independence has largely been rewritten to support the current rulers of today.

The celebration of 31st August, the day Malaya gained independence from the British as the major national day, to take place tomorrow, seems to exclude the aspirations of Sabahans and Sarawakians, where on 16th September 1963 they joined Malaya and Singapore in the union called Malaysia. Groups like the Communist Party of Malaya, which fought and lost many lives against both the British and Japanese, are almost totally excluded from the narrative.

This is all occurring in an environment desperately in need of a narrative of inclusiveness.

The current Merdeka celebration suppresses the generation of new ideas and a national creativity that could spring up from an environment of inclusiveness. The celebrations have severed any empathetic connections between Malaysia's various elements within the rich and diverse history of the country, replacing it with a single narrative one would find on a cellulose film like "Tanda Putera," which purportedly describes the events of 1969 which led to the country’s worst race riots and which even before its release has kicked off a major controversy over Chinese-Malay relations.

A whole generation now exists who behave according to the beliefs and values incorporated within this narrow narrative. This denies the cascade of alternative realities and their accompanying narratives which stifles national creativity and evolution that Malaysia needs to face the challenges before it. The celebrations fail to incorporate any evolving aspirations that would promote and enhance the semblance of national unity.

Ironically under the Mahathir years, a strong national narrative existed which at the time appeared to be shared by middle-class society. Malaysia in the 1980s and early 1990s had a deep sense of national pride where any senses of inferiority were thrown out of the window with the catch cry of Malaysia Boleh (Malaysia can). Many people at the time believed it was the best country to live in. Almost 25 years on these feelings have been replaced with a sense of despair over law and order, corruption, religious intolerance and self-indulgence.

The fact that Malaysia has many domestic issues to solve and that its place in the world is slipping away, according to many international rankings, is largely out of the national discussion and public agenda. Rather it appears division is in everybody's best interests, from school administrations right up to the highest echelons of government.

Malaysia has lost that true spiritual unity between people that was the catalyst that brought independence in the first place, first with the British during the 1950s and then between the parties that made up the Malaysian union in 1963.

What is missing today are aspirations about the purpose and dreams the country was founded upon during the struggle for independence, and subsequent search for its identity as a nation. Malaysia as a nation is yet to realize that diversity has a spiritual unity about it. Suppress it and the national narrative becomes one without optimism for a just and equitable society.

The current national narrative is one captive under the old traditional caste system with little relevance to the needs of contemporary society. Consequently the Malaysian mind is a prisoner of this paradigm, unlikely to break free to enable an enlightened society.

The rulers have felt insecure with their own values, preferring to adopt a neocolonial development paradigm of unquestioned growth and development and profiteering. Development has been a game for the elite, without any questioning of this occidental paradigm. Greed and intolerance have developed into two of the most important post-Merdeka qualities.

This has been at a great cost to the development of any sense of shared spiritualism about the country. Malaysia is in need of the qualities of compassion, tolerance, mercy and forgiveness as the assumptions behind any national development agenda. This is where the universal values of Islam are important and where the true sense of an Islamic state really exists. Islam must be viewed as a way to enhance the quality of society rather than a tool to control society.

The banning of books, the demolition of buildings and the suppression of many practices is causing the cream of society to flee. Repression through brute force has cost the country dearly. Crony capitalism and corruption are keeping Malaysia in the relative dark ages. A static view of the economic pie lowers any national sense of vision. This parochial thinking is preventing any vision of a progressive and prosperous country in the coming decades, which may actually force Malaysia to become a slave to the new emerging world order.

Malaysia must find its own dream rather than adopting those of other nations. The aspirations of multi-media super corridors, Cyberjaya and biotechnology clusters are the stuff of other peoples' dreams, preventing the creation of something that could be uniquely Malaysian.

Many groups are dispossessed and have no part in the national narrative. Rather capitalistic greed entrenched within so-called development projects continue to bypass the poor and needy. Malaysia is not only divided by race but by socioeconomic class, taking the country further away from any notion of a single Bangsa Malaysia (Malaysian nation).

History has been written by those who have dominated society. Malaysians have been blinded by the political paradigm created by those who rule, preventing people from seeing new possibilities. This history doesn't match contemporary aspirations.

The evils of this progress will be felt by future generations who will have to pay dearly when picking up the pieces of a destitute and stripped environment that others before them have ravaged.

As UMNO, the ruling party, goes back into the shell of Ketuanan Melayu (Malay superiority), the language of intolerance and inequality will continue and maintain a divided country. This ignores the needs of a rapidly changing society, which will almost certainly bring further friction where the illusion of harmony may come to an abrupt end.

The current divisions within UMNO are serving the interests of a select few who can dictate the agenda. This will prevent UMNO learning how to reengage its traditional constituency and reform itself in the spirit of Merdeka.

At the same time, the popular vote in the last election strongly indicates that the majority of people are looking for some form of genuine change within society. But the election was really just a hope or even fantasy that any outcome would actually bring change of any significant nature. Real change could not occur as all the parties involved within the political process are institutionalized. Any real change requires a complete rebirth of ideas and new processes to accompany them. This requires a totally frank national dialogue in the spirit of accepting diversity in the spirit of those people who worked together to achieve Merdeka more than 50 years ago.

One may have to question the results of the political system as being an occidental outcome where a Malaysian solution is required. The Westminster system supports an adversarial system of government and opposition. Maybe the Malaysian political process should be much more consultative, like it once was. National unity coalitions may serve better than the current adversarial system of government and opposition. It's time to explore these possibilities for the sake of Malaysia's future.

Policy must be looked at through apolitical eyes, consensus and bi-partisanship. This is more the Malaysian way, where this new sense of national unity would also help develop this elusive or even mythical 'Malay unity' that many are seeking. Malaysia is not yet a large enough country where it can afford to divide its administrative talent between government and opposition. All hands are needed on the deck of government for Malaysia to prosper.

The underlying message of GE-13 in terms of both the popular vote and seat results could be interpreted as a general wish for all to work together regardless of race, color or creed. This is where the new Malaysia could be born, where justice and equity could be achieved. Malaysians must move onto new truths and reconciliations in the belief of one nation Malaysia. Otherwise Malaysia will continue to be divided with increasing frictions.

This new rebirth requires a scrapping of the current race-based political system, something often talked about. Race-based idealism must be replaced with policy-based idealism, where governments work upon a platform based on consensus. Ritual must be replaced with principled pragmatism with ample social discussion on how Malaysia should be shaped for the future. That is a fragile goal indeed.