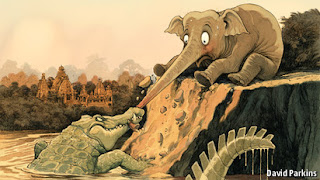 India’s economy is in its tightest spot since 1991. Now, as then, the answer is to be bold

IN MAY America’s Federal Reserve hinted that it would soon start to reduce its vast purchases of Treasury bonds. As global investors adjusted to a world without ultra-cheap money, there has been a great sucking of funds from emerging markets

As the BRICs and other developing economies stumble, there is strange and widespread assumption that emerging markets are helpless without the West. The opposite might be true.
August this year has been exceptionally unkind to the emerging world. We know that Egypt has been plunged into political and economic turmoil, yet that is only the most extreme case. Elsewhere, stories proliferate about economic slowdowns in Peru and China, and protests in Brazil and Turkey (among others).

Yet rather than viewing these events in the larger context of the past decade, the most common response is to write the obituary of emerging world development. As a lead article in the New York Times said this week: "with expectations mounting that the Federal Reserve, led by its departing chairman Ben S. Bernanke, may soon begin to tighten its monetary spigot, Istanbul's skyline could well be a harbinger of an emerging-market bust brought on by unpaid loans, weakening currencies and, eventually, the possible failure of developers and banks." The Wall Street Journal even got a tad cheeky, saying about the investing landscape, "Buying Dips? Stick To Hummus, Not Emerging Markets."

These obituaries are likely to be premature. Our imperialist mindset -- a hangover from the 20th century -- suggests that developing countries are always helpless without the West. That says more about our limited analytical abilities than about how the emerging world will fare.
Sentiments of gloom, however, are widely shared by investors and analysts. The inside-baseball version involves a complicated narrative that judges emerging world growth by global money flows that move hither and yon depending on currency levels, interest rates and central banks actions. As one economist recently explained, "Cheap financing allowed emerging economies to temporarily live beyond their means, borrowing the difference from abroad: capital flows into such countries enabled them to import more than they exported."

Such analysis posits that emerging world growth has rested on two increasingly shaky pillars: easy money emanating from the Federal Reserve and other central banks and the explosive growth of China over the past decade. With signs that money may soon be less easy to come by, and that China is turning away from big industrial projects and real estate and toward domestic consumption, there is a widely shared sense that the emerging world is about to go from golden to ugly.

To be fair, many of those predicting the demise of the emerging world growth are also likely inclined to see crises ahead in the United States, Japan and Europe. Pessimistic views of the future are ubiquitous, and this month's tendency to call an end to global growth is simply the latest rotation that has seen similar death knells sounded for China, the European Union, Japan and the United States.

Yet there is something else here, a bit more troubling than just the usual doom and gloom. There is the belief that the success of the emerging world of late is simply another bubble created by central bank policy in the Western world, sort of a global housing bubble gone awry. In this scenario, all the talk of a newly confident, more affluent and politically stable emerging world masked deep structural faults, the most glaring of which was a dependence on cheap capital and Chinese imports of the raw materials many of these emerging countries provided.

That fits neatly into a long legacy of disdain for the ability of non-Western societies to manage their own affairs. European imperialists of the late 19th and early 20th century notoriously viewed their colonies as incapable of self-government. Even the much lauded Woodrow Wilson, championing self-determination, didn't believe that non-Western societies could tend to themselves. He advocated for a system of "mandates," whereby countries such as Iraq that desired independence would be tutored by European powers until they were deemed ready (for more, see A. Scott Berg's new biography of Wilson).

It's been many decades since then, but attitudes prevail. The European Union never has accepted Turkey as a potentially equal member of their club, notwithstanding Turkey's unequivocal economic and political success over the past 20 years. Brazil has received more attention for recent protests about government corruption than it did for wise government policies that actively constrained the frothy speculation and run-away growth that hobbled it in the past. Peru's growth is written off as a flash in the commodity pan. Investors dump Indonesian investments that were hastily acquired because of a naïve belief that Indonesia is somehow a proxy for China's rise. Meanwhile the entire Indian economy is treated as though it's in free-fall because of missteps by India's central banks and recent significant weakness in the rupee.

Some of these views are also espoused within those countries, of course. Chinese analysts are often quite negative about China, Brazilian about Brazil, Indian about India and all about each other. The experience of being distinctly less powerful and affluent in the 19th and 20th centuries sowed a distinct lack of self-confidence and a strong conviction that good times are simply brief interludes. Corruption and conspiracy will ultimately ruin everything.

Yet what is most remarkable about the past decade is how those attitudes had begun to shift. That trend intensified after the financial crisis of 2008. Having been lectured to by Western authorities about the structural deficiencies of their economies, these societies watched the near-implosion of the American and European financial systems in 2008. Meanwhile, their own economies weathered the storm, as did China's. Elites in the emerging world began to believe -- rightly -- that they could navigate their own economic fate and determine their own policies just as competently and perhaps more so. The rising incomes of hundreds of millions of their citizens was further proof.

Sentiment may have shifted dramatically in the past few months, but there is a substantial difference between that and structural collapse and crisis. Yes, emerging world economies are seeing slowing growth relative to the heightened rates of recent years, and yes, the shift to domestic demand-driven economic activity is not easy. But that is not the same as re-writing the script of the past decade and turning the achievements of many of these countries into a mirage.

When it comes time to write the story of the first years of the 21st century, the global narrative will not only be the struggles of the United States to adjust to a world of diffuse power, or the rise of China and the decline of Europe. It will be the way that substantial portions of the planet emerged from agrarian poverty into the early stages of urban affluence. It will be the way the Internet and the mobile revolution anchored by the rise of China began to reshape the vast regions of sub-Saharan Africa; how India's middle classes started to redefine that country, and how millions in Latin America sloughed off decades of authoritarian incompetence and began to blossom. Never in human history have more people become more affluent more quickly than in the opening years of the 21st century.

They are not about to slink away in defeat. Having seen the possibility of a better life created by their own ingenuity and decisions, those billions are not about to collapse backward, anymore than equivalent millions in the United States and Europe in the 20th century did. Yes, collapse is always possible, and always will be. But enough with writing off a considerable portion of the planet because a few bankers in Washington might change how many bonds they purchase.
This article originally appeared on Reuters.com