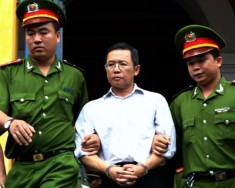 Vietnam's aspirations for the future face several hurdles at home and abroad. Although the recent meeting between the heads of state of Vietnam and United States suggests better times ahead, the extent of this progress will depend on the depth of Vietnam's cooperation

The meeting between President Truong Tan Sang of Vietnam and President Barack Obama at the White House last week was neither failure nor success. Only time will tell whether the high profile visit, only Vietnam's second to the US for a head of state, will yield substantive bilateral results. What was clear, however, was that the one-time battlefield adversaries aim broadly to build stronger relations.

The joint statement issued after the meeting was upbeat and forward-looking, as one might expect. The agreed formation of a US-Vietnam Comprehensive Partnership promises to create opportunities for bilateral cooperation in an array of social, political, economic, and technological fields. It also opens the way for the development of a strategic partnership of military-to-military exchanges, a significant development in light of Vietnam's intensifying territorial disputes with neighboring China.

Negotiations for Vietnam's entry into the Trans-Pacific Partnership free-trade pact could be concluded later this year, to the liberalizing benefit of Vietnam, US, Japan and other expected signatories to the US-led deal. The US backed Vietnam's accession to the World Trade Organization in 2007 and bilateral trade has flourished in recent years.

On the important yet sensitive subject of human rights - undoubtedly the primary obstacle to stronger US-Vietnam relations - the two presidents were vaguely said to have had a "candid and open dialogue to enhance mutual understanding and narrow differences on human rights".

Obama came under pressure from various rights groups before the meeting to link progress on rights to future engagement initiatives, though it's not clear that was the message he delivered to Sang. But Vietnam's poor treatment of political dissidents, including an intensifying campaign against on-line journalists and bloggers, and apparent unwillingness to enact serious political reforms has restrained relations with Washington.

It is no mystery that the US's so-called "pivot" to the Asia-Pacific has given new impetus to strengthening ties with Vietnam. In building up relations and reaffirming its strategic commitment to the region, the US sees Vietnam as a potential pivotal strategic partner in its drive to counterbalance China's influence.

The impasse on rights, however, has hampered Vietnam's aspirations on the international stage. In many ways the US operates as a sort of global gatekeeper due to its size and influence, with its diplomatic support providing a sense of legitimacy to a state's international activities. Vietnam is currently bidding to win a seat on the United Nations Human Rights Council, a move local activists are strongly opposing through a concerted appeal to international organizations. Vietnam has also expressed interest in participating in global peacekeeping operations, to which the US has stated its readiness to assist Vietnam "with training and other support for this effort through the Global Peace Operations Initiative".

As Vietnam seeks a larger role regionally and globally, ranging from its roles in the Association of Southeast Asian Nations to the UN, it will increasingly require international recognition of the quality and legitimacy of its leadership. Vietnam is unlikely to find many advocates for either, including in the US. For all of Vietnam's international ambitions, it continues to fall short at home with its own citizens. Before Vietnam can venture beyond its borders and take a position on the world stage, it will first need to address its own domestic shortcomings.

Global ambitions, domestic woes
From entrenched corruption, economic mismanagement, to a sagging economy, as well as the people's distrust of the government's current drive to reform the constitution, Vietnam's domestic problems are well-documented. In particular, the Communist Party-dominated government's abysmal human rights record has plagued US-Vietnam relations, due in part to a very vocal Vietnamese-American community, many of whom fled their birth country after the fall of Saigon in 1975.

That community, ever critical and suspicious of the Communist government's policies and intentions, constitutes a sizeable constituency for certain members in the US Congress, thereby ensuring their voice is heard in US-Vietnam developments. Although this community alone is not enough to maintain Washington's current arms embargo against Vietnam, it can muster enough noise to make sure members of Congress and the Senate do not lose sight of Vietnam's ongoing human rights abuses.

Vietnam cannot lead on the world stage because it not a model nation, certainly not one that embodies the liberal values the UN claims to represent. The detention of bloggers and democratic activists, the limiting of free speech and association, single-party rule, and other transgressions of basic civil liberties are all in violation of the UN's call for universal rights - ideals and principles to which Vietnam, as member of the UN, purportedly acknowledges and supports.

The US made it clear to Vietnam during Sang's visit that without clear and concrete improvements in human rights it will not lift its arms embargo - a key leverage point as Vietnam strives to build up a credible deterrent to China's growing military might. This will not stop the US from broadening and deepening ties with Vietnam in other areas, including military-to-military exchanges.

To be sure, few expect Vietnam to transform itself overnight into a beacon of democracy in Southeast Asia. But the utter failure of the ongoing US-Vietnam dialogue on human rights, including inconsequential meetings held in Hanoi in April, has shown Hanoi is only willing to pay lip service to US concerns on human rights. During his visit, Sang acknowledged that the US and Vietnam do not see eye-to-eye on these issues but claimed that the disagreement would not hamper the development of stronger ties. But as long as Vietnam's leaders lack the support of their own people, US and international support will necessarily be limited.

Khanh Vu Duc is a lawyer and part-time law professor at the University of Ottawa. He researches on Vietnamese politics, international relations and international law. Courtesy Joyo News