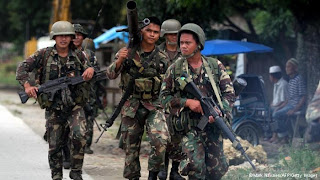 Some 2,000 people have fled their homes in the southern Philippines as government troops clash with members of a breakaway Muslim group. The rebels have allegedly been trying to derail ongoing peace talks

The 2,000 villagers fled overnight Friday from renewed fighting between government forces and the Bangsamoro Islamic Freedom Fighters (BIFF), taking refuge in a school in the village of Nalapaan. The main fighting was taking place in villages near the town of Aleosan in Maguindanao province, 930 kilometers (578 miles) south of the capital, Manila.

The rebel group is being blamed for a series of bomb attacks that have killed 17 people over the past two weeks.

Police have also reported two other violent incidents in Mindanao in the past day or so, including a grenade blast that injured four people in the town of Kabacan late on Friday. On Saturday, an improvised explosive went off at a roadside near the town of North Upi, injuring no one, while police disarmed a second device nearby.