Day of Rage vs. Pork 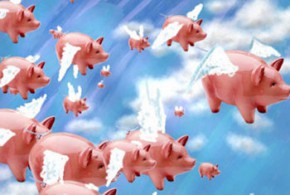 Officially, today, Monday, Aug. 26, is National Heroes Day in the Philippines. But to a million Filipinos, probably a great many more, this is a day of rage. As you read this column, a million Filipinos are gathering at the Rizal Park in Manila to protest and give vent to their outrage at rampant corruption through the much-abused pork barrel scheme. Called the Priority Development Assistance Fund, this scheme and its greedy and shameless exploiters have cost the Filipino taxpayers the peso equivalent of hundreds of millions if not billions of dollars. They have also stunted countryside development

The protest rally was social media-initiated but organizers on the ground are myriad — students and academicians, farmers and laborers, religious people, business people, ordinary taxpayers — united in anger at brazen thievery by public officials, and in their demand not just for the abolition of the pork barrel in every possible form but, more important, for transparency and honesty in government.

Similar rallies have been organized in various Philippine cities and in front of Philippine consulates in the United States and other countries.

It all started with the recent exposure of a series of pork barrel scams involving ghost projects of bogus NGOs, a businesswoman allegedly acting as fixer and several high-profile legislators who flatly denied they received any kickbacks. But the postings on the Internet on how the scams were carried out were so detailed and many of the details were so clearly verified that they earned a lot of credibility. Investigative journalists went to work — and dug up a lot more dirt than earlier imagined.

The whistleblower, Benhur Luy, is a relative and former employee of businesswoman Janet Lim-Napoles, who controls a network of shell NGOs. Luy, who has accused Napoles of kidnapping him, is now under protective custody of the National Bureau of Investigation. Several other former employees of Napoles have since joined him as putative state witnesses.

In a move to preempt the “million people march,” President Benigno Aquino last week went on TV to announce that he would abolish the PDAF and put in its place seven measures that would prevent the misuse of public funds. Most Filipinos dismissed this as the “same pig with a different collar.” For one thing, the proposed new system wouldn’t touch the lump sum discretionary funds under Aquino’s direct control as president. These funds aggregate to the peso equivalent of billions of dollars. Neither would the proposal touch the discretionary funds of the judiciary.

Pork barrel isn’t unique to Filipinos. They learned it from the Americans, who coined the term after the barrels of pork that pre-Civil War slave owners, in a perversion of generosity, plunked down for their slaves to scramble over. In the US senate, former presidential candidate John McCain today leads the fight against “earmarks,” the new American term. It’s the same old patronage politics: the channeling of federal funds to unnecessary local projects that translate into votes.

In Indonesia, pork as table fare is revolting. But many politicians love it as political patronage. The Indonesian Forum for Budget Transparency (Fitra) lists 17 ministries that are fat with social aid funds with no clear purposes. They’re vulnerable to misappropriation — especially in the months leading to the next parliamentary elections.

In presidential democracies — like the Philippines, the US and Indonesia — pork barrel is a mockery of the separation of powers among the executive, the legislature and the judiciary. Holding the “power of the purse,” legislators are overlords of budget preparation. When they also monkey with budget execution, they stab the body politic.

I’m optimistic, however, that the Filipino “day of rage” against “pork” will peacefully revolutionize Philippine democracy into better governance — and inspire greater transparency in politics everywhere.

Jamil Maidan Flores is a Jakarta-based writer whose interests include philosophy and foreign policy. He is also an English-language consultant for the Indonesian government. The views expressed here are his own.