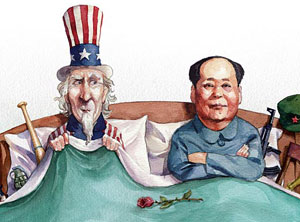 Robert Manning recently argued that America’s approach to China should not be called ‘containment’ but ‘counterbalancing’.  This argument brings to mind the writings of Coral Bell, who had some wise things to say about the concept of containment back in 1968:

This debate about names — whether ‘containment’ or ‘counterbalancing’ — soon gets tangled in arguments about what the names themselves mean, and seriously misses the point. By debating the strategy before we get clear on the policy, we put the means before the ends. What we need to do first is clarify the policy that lies behind these strategies. So let’s put the word ‘containment’ to one side and instead explore the key questions about the policy itself.

The key questions are pretty simple: what is the aim of the current US policy towards China? What are its likely costs? Will it succeed? What if it fails? And what are the alternatives?

America’s primary aim in relation to China today is to preserve its position as the primary strategic power in Asia. This aim is seldom scrutinised or even acknowledged. It is taken for granted because it assumes that primacy is the only conceivable strategic role for America in Asia, that perpetuating US primacy is thus the only alternative to strategic withdrawal, and that US primacy therefore provides the only possible basis for a stable and secure future for Asia, as it has done for so many years past. And it assumes that everyone else wants Asia to remain peaceful, and that they all agree that continued US primacy is the only way to ensure that.

That used to be true. Since 1972 US primacy in Asia has been uncontested, and the costs of sustaining it have consequently been relatively low. Whether America can preserve its primacy in Asia in the future, and how much it would cost to do so, depends critically on whether this remains true. Most people — Americans and America’s friends and allies — believe it is. In particular, they think that China will ultimately accept US primacy as the foundation of the Asian order in the future, as they have since 1972.

But this might be wrong. All the evidence suggests that China no longer accepts US primacy. It wants to reshape the Asian order to give itself a much bigger role. This is surely what President Xi means when he talks of ‘a new model of great power relations’. If that’s right, then America can only achieve its own objectives by persuading or compelling China to back down. Those who think China is not serious about challenging American primacy assume this will be easy, but they may underestimate China’s power and resolve. China may be just as committed to challenging American primacy as America is to preserving it. They too might be willing to use ‘every element’ of their power to achieve their goals in Asia, as President Obama said America is. And China today is far wealthier, and hence ultimately more powerful, relative to the United States than any previous rival has been — even the Soviet Union. So if the Chinese are serious, it will cost America a great deal to force them to abandon their ambitions, and there is no guarantee it will succeed.

And what if it fails? The biggest risk is not that China will throw America out and establish its own hegemony over Asia but that the two countries will be drawn into prolonged and inconclusive strategic rivalry carrying immense economic costs and strategic risks — including the risk of major, even nuclear, war. This is not a merely theoretical possibility, as the standoff between China and Japan over the Senkaku/Diaoyu islands shows. Any serious debates about American policy in Asia must weigh this risk very carefully, just as Chinese debates must.

So what are the alternatives? What other objectives might America adopt in Asia, other than perpetuating its primacy? The key here is to recognise that there are more than two options. America does not face a simple choice between abandoning Asia to China or competing for primacy against China. In between these opposites lie a host of options, which combine differing proportions of accommodation and constraint. The big question is how far America should be willing to accommodate China’s ambitions, and where it should draw the line.

This is an issue that America and its friends have not yet seriously debated. Instead, they take it for granted that America’s only possible aim in Asia is to perpetuate its primacy, and they assume that China will accept that. This is what the debate about ‘containment’ is really all about. Those who insist that America is not containing China are not arguing that America is — or should be — stepping back from primacy to accommodate China’s ambitions. They think that China will keep on accepting US primacy, so that China is, in effect, containing itself by forgoing any serious challenge to the US-led order. And that is why the Chinese themselves — who know they will not accept US primacy — insist that America is trying to contain them.