Elections in Cambodia - The humbling of Hun Sen 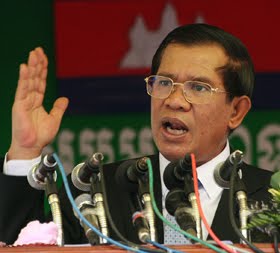 Cambodia’s strongman gets a shock at the polls

SILENCE was the uncharacteristic leitmotif in the recent election campaign of Cambodia’s prime minister, Hun Sen (pictured above). So apparently confident was he of victory that, over the whole period of the campaign, he did not once personally deign to canvass support. Then, in the aftermath of the results announced on the evening of July 28th, he spent several days in hushed seclusion, perhaps shocked at how well the opposition had fared. He emerged eventually on July 31st, but no one is sure what he will do next. After 28 years of authoritarian predictability, with Mr Hun Sen himself at the helm, the only certainty now seems to be that Cambodian politics is entering a phase of unusual and intriguing flux.

Many had predicted that the opposition would make gains at this election, but not quite on this scale. According to provisional official results, the opposition Cambodian National Rescue Party (CNRP) almost doubled its share of the 123-seat national assembly, winning 55. Mr Hun Sen’s ruling Cambodian People’s Party (CPP), by contrast, dropped from 90 to 68 seats, thus losing the two-thirds majority that had allowed it to fiddle with the constitution. Minor parties were obliterated by the CNRP steamroller. The CPP had steadily increased its share of seats in every election since the full restoration of democracy in 1998. That makes this an extraordinary setback for them and a stunning result for the CNRP.

Indeed, the leader of the CNRP, Sam Rainsy, claims that his party won the election, winning 63 seats, a majority. He refuses to accept the CPP victory, and has asked for an independent committee to be set up to investigate all the irregularities and their effect on the polls. Full results will not be known until mid-August. Quite apart from the widespread rigging reported on polling day itself, the CPP’s monopoly of the media means there has never been a level electoral playing field. Mr Sam Rainsy himself was not even allowed back into the country after years of self-exile until a week before polling (having received a royal pardon for charges that he says were politically motivated). Even then he was not allowed to stand for a seat.

Why did Mr Hun Sen fare so badly? An authoritarian by instinct, he has spent years consolidating his grip on power, sometimes brutally. This time round, though, he faced an unusually united opposition: two of the bigger groups, the Sam Rainsy party and the Human Rights party, merged into the CNRP specifically to fight this election. The return of Mr Sam Rainsy, a former finance minister, also galvanised the opposition, as he revealed himself to be an unexpectedly charismatic campaigner.

Most important, however, this election saw a generational shift in attitudes and voting allegiances. Of the 9.5m or so registered voters, more than half were under 30 years old. They were born after the genocidal regime of the Khmer Rouge in the 1970s and the civil wars that followed—the primary reference points for Mr Hun Sen’s political appeal. They were therefore immune to the usual warnings from the CPP that an opposition victory would spell a return to civil conflict. This generation is looking forward, not back, and compares Cambodia with other countries in the region rather than its own dark past.

The younger generation appreciates the economic gains under the CPP in recent years, but it wants more. This election was fought on local issues, which include mounting anger over the granting of land concessions to Chinese and Vietnamese companies, in hock to cronies of the ruling elite.

There is frustration, too, over a widening wealth gap and corruption that favours the politically connected. Mounted on their scooters, armed with social media on their smartphones, the kingdom’s young people voted for change, and in the process reduced the government-run papers and television to the role of a state-propaganda machine capable of impressing only its own supporters. The CPP may have just about hung on in the countryside, but the urban vote and the youth vote must have gone overwhelmingly to the CNRP.

The choices for Mr Hun Sen, who has said that he wants to be prime minister for at least another ten years, are stark. He could reform the CPP, which would include delineating a path for succession and making way for the next generation of leaders, and reach an accommodation with the opposition. Or he could dig his heels in and ignore the message of the election. If he does insist on trying to maintain the status quo, then civil unrest is likely, as is a drubbing at the polls next time around.

Early indications are, however, that Mr Hun Sen intends to be pragmatic and conciliatory, as he is rather more often than his harsher critics allow. In his first, brief post-election remarks he said that he would accept an independent investigation into allegations of electoral fraud and that he was prepared to speak to the opposition, as it was important that the election not divide the country. Such flexibility might yet prolong the career of a humbled but wily political operator. It would also bode well for a changing country straining to escape its past. The Economist